It wouldn’t be the holidays without indulging in a few cups of eggnog. The classic alcoholic egg milk punch is a rich, chilled, sweetened, dairy-based beverage, traditionally made with milk, cream, sugar, whipped egg whites, and egg yolks which gives it a frothy texture.

All over Los Angeles, bars are putting their own twists on the traditional cocktail. From spiced to sweet, check out 10 creative eggnogs to try in L.A. this holiday season.

Noggy or Nice at The Garland 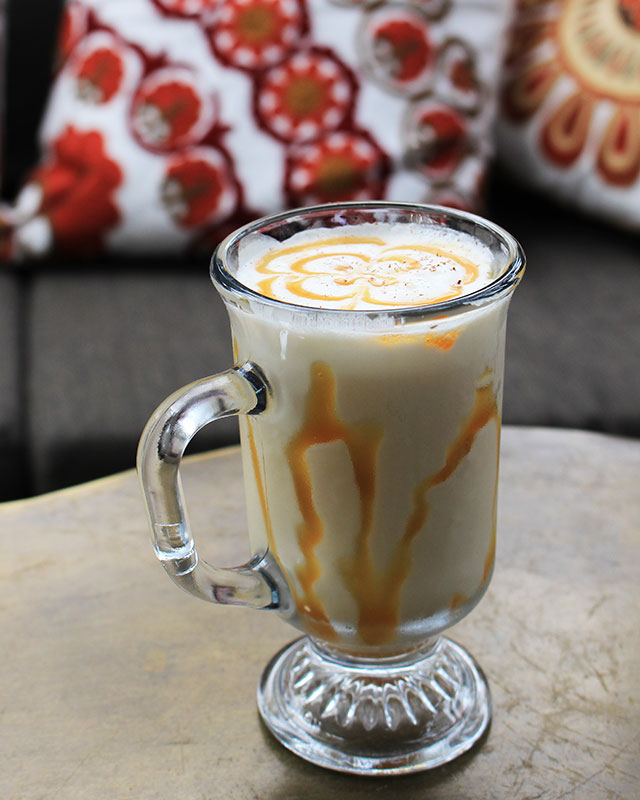 ‘Tis the season at The Garland. Located in North Hollywood with true Hollywood roots, the property is spreading holiday cheer all month long. At its signature restaurant, The Front Yard, Santa’s checklist includes the Noggy or Nice made with eggnog, caramel sauce, kosher salt, whipped cream, grated nutmeg and Sailor Jerry Rum.

Hans Gruber at Ever Bar 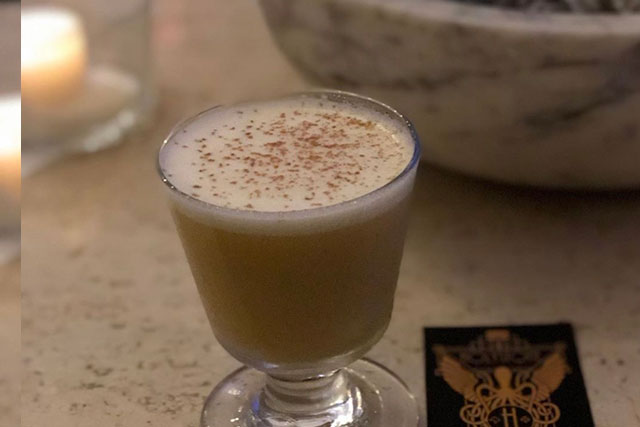 Ever Bar, at The Kimpton Everly Hotel is paying homage to one of the best villains in Christmas movie history. Named after the internationally-feared antagonist in “Die Hard,” the Hans Gruber is made with horseradish and green apple-infused Boulard Calvados Copper & Kings American Brandy, Tempus Fugit Creme De Cacao, vanilla, whole egg and nutmeg. 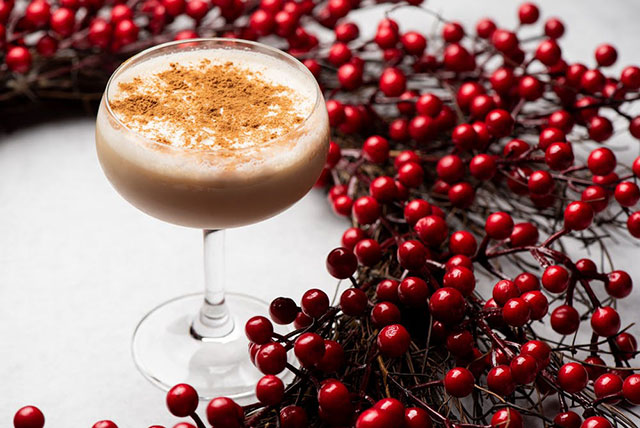 Holidays getting you down? Rampant consumerism killing your vibe? Head over to the Office Holiday Popup Bar, a Dunder Mifflin holiday miracle that has taken over space next to Severance Wine Bar. For one month only, the space has been transformed into a bureaucratic fever dream fueled with plenty of champagne, themed cocktails and holiday fare. While you are there, try out the Festivus For The Rest Of Us, the Office Party’s house eggnog featuring three types of sherry and a nutmeg garnish. 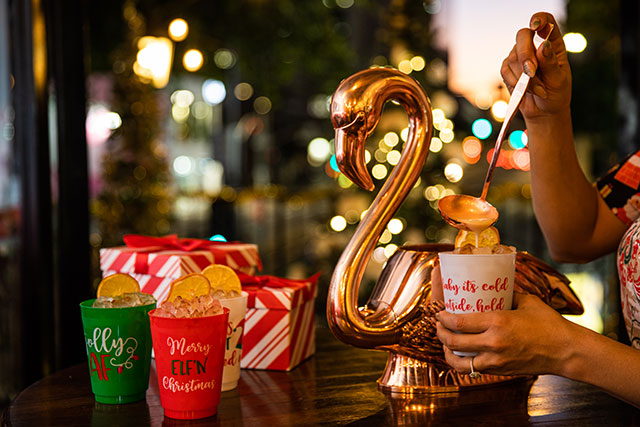 Deck those halls and trim those trees because the Good Ol’ Boys that redefined elevated Southern cuisine at Preux & Proper are pulling out all of the stops this holiday season as they introduce Sleigh Bells On Spring: a holiday spectacular featuring holiday specials, decorations galore, Christmas cocktails and a holiday calendar of festivities that includes weekly visits from Santa Claus himself. Grab your friends and share the Happy Swanza , a dairy-free libation for groups of four made with Copalli Barrel Rested Rum, Makers Mark, coconut eggnog, and pumpkin spice. 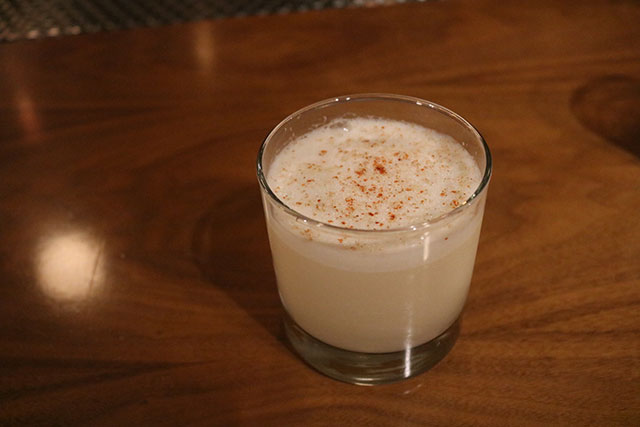 With the holidays just around the corner, it is time for big-batch recipes that will *shake* up a family party, office bash, or any Friends-giving. Birds & Bees, 1950s themed mid-century modern cocktail bar in Downtown Los Angeles, has got just what you need. Bar Manager Jake Larowe makes everything in house – from the tinctures to infused liquors to syrups – and his Christmas Palm Tree Eggnog with Rye Whiskey and Mezcal is no exception. Filled with typical spices like cinnamon, vanilla bean, and nutmeg, but given a spicy touch with chili pepper, this twist on a classic is a crowd-pleaser, especially during the holiday season. 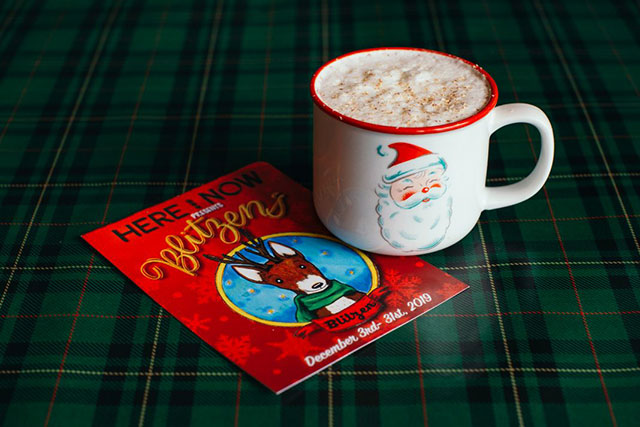 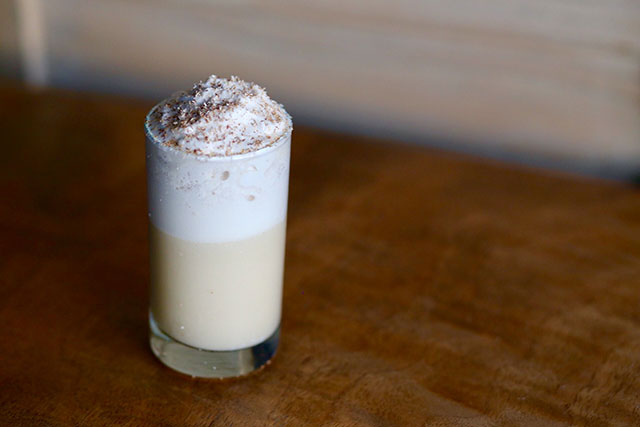 Norah’s Winter Eggnog is created with locally made spiced rum, cognac, egg, coconut cream, winter spice syrup topped with a winter spiced whipped cream and freshly grated nutmeg. The best part? It’s dairy-free so you can indulge without guilt (and not have to deal with a rumbly tummy). 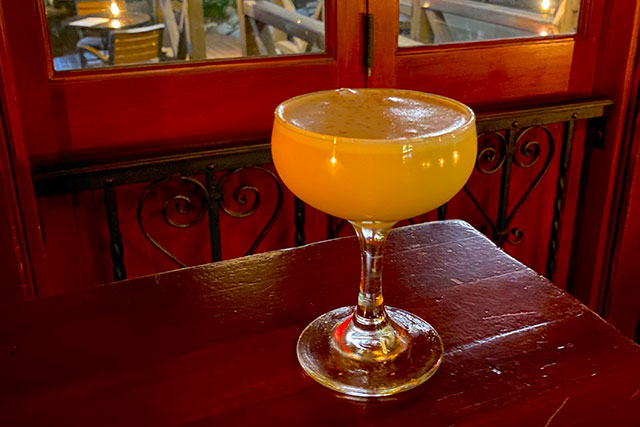 Christmas is here and bringing good cheer at The Raymond 1886 with their elegant Eggnog, made with Mount Gay XO, sugar, cream, egg yolk, and freshly grated cinnamon. There is no better way to celebrate Christmastime.

The Royal Egg at BOA Steakhouse 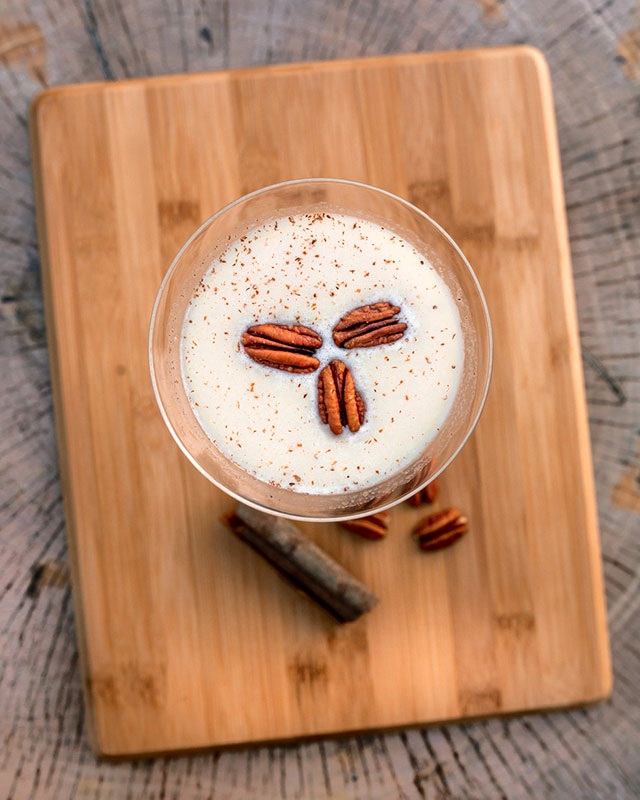 Eggnog gets the royal treatment at BOA. The Royal Egg cocktail is sweet treat made with Guillotine Originale Ultra Premium Vodka, Guillotine Heritage Barrel-Aged Vodka, Frangelico, simple syrup and homemade eggnog with a blend of dates, vanilla and spices, garnished with grated cinnamon and pecan nuts. 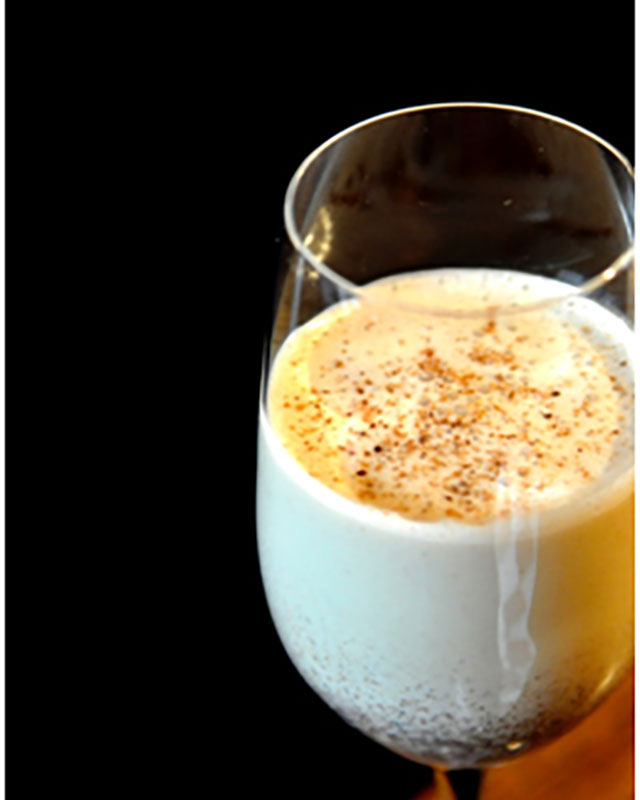 Christiaan Röllich at Lucques will have you singing carols with his Kingbird Eggnog creation. Made with El Dorado Spiced Rum, cream, egg and fall spices, this seasonal sipper is the perfect after-dinner dessert.