12 Cocktails To Drink On National Rum Day In L.A.

August 16 is National Rum Day and if you haven’t already been indulging in the tropical spirit all summer long, now’s your chance. Sure you can find a number of these craft cocktails at traditional tiki bars but some of the best rum-based libations of the season are popping up at the most unexpected spots too.

So unleash your inner pirate and check out 12  rum cocktails to around L.A. to try this week.

The Sam Cooke at Birds & Bees 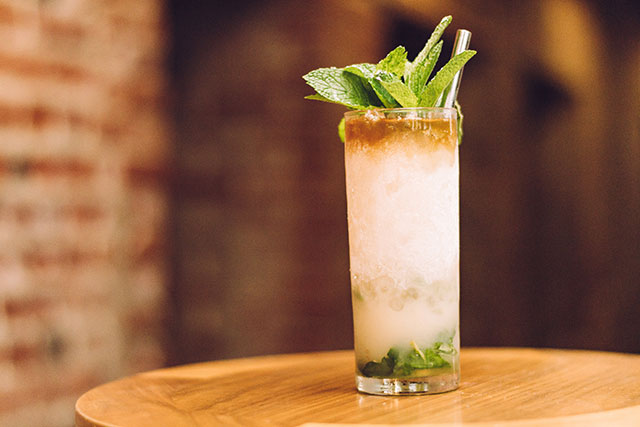 Downtown LA’s 1950s themed underground cocktail lounge Birds & Bees and Bar Manager Jake Larowe know that rum is a liquor made for beating the summertime heat and have mastered a selection of cocktails to help any cocktail connoisseur cool down. Jake utilizes seasonal flavors, house made infused liquors and tinctures to create out of the box rum cocktails that transport a drinker back to a specific time period, iconic moment in history or place in Los Angeles. The Sam Cooke is a drink inspired by the legendary King of Soul, made with brown butter rum, honey, lime, grapefruit, all spice, and fernet float. This sweet and sultry cocktail will take you back to the 1960s.

Lost at Sea at Castaway 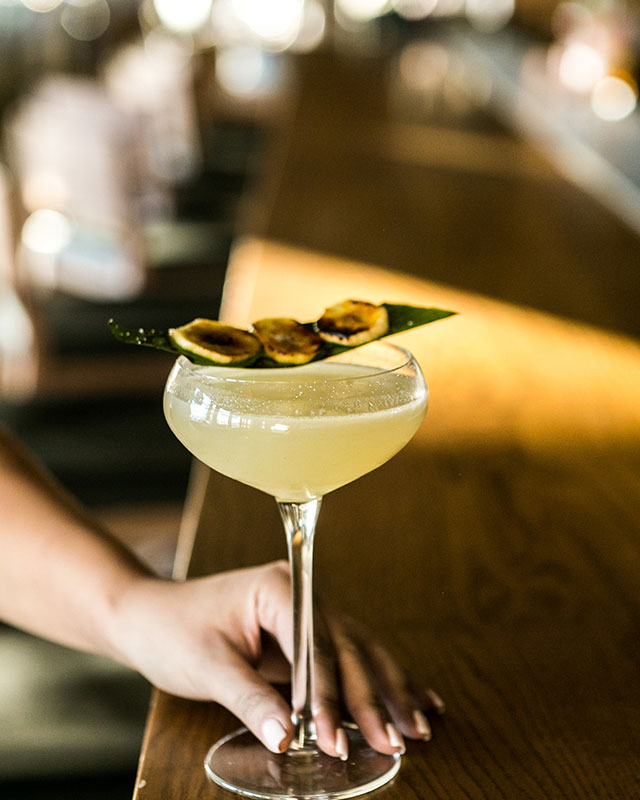 Hands down showcasing one of the most spectacular views of Los Angeles, Castaway is a chic hilltop restaurant complete with a chic patio flanked by fire pits. On the cocktail menu, check out the Lost at Sea made with Calwise Blonde Rum, lime and banana liqueur and brûléed banana. Just try not to get lost in the breathtaking scenery while sipping. 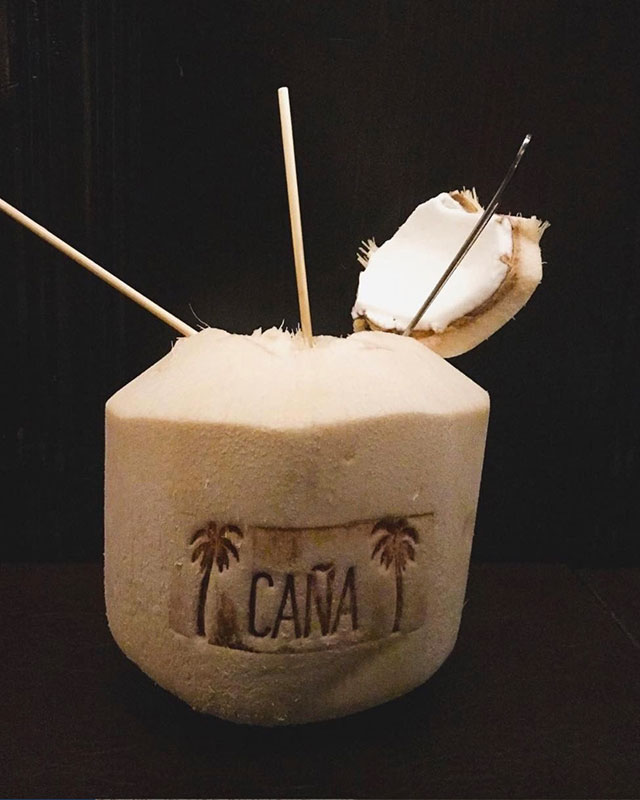 If you are a rum connoisseur, you already know of Caña Rum Bar, L.A.’s most intimate and evocative rum bar. Debuting in 2010 as one of the largest houses of rum in the country, Caña features over 400 rums to savor and is home to the Caña Rum Society. It’s nearly impossible to pick a standout cocktail on the menu so just keep it simple and celebrate the rum holiday with their classic Rum & Coconut Water, made simply with Cruzan Black Strap from St. Croix, shaken with coconut water and served inside of a real young coconut with a spoon. A great way to hydrate and imbibe rum at the same time. 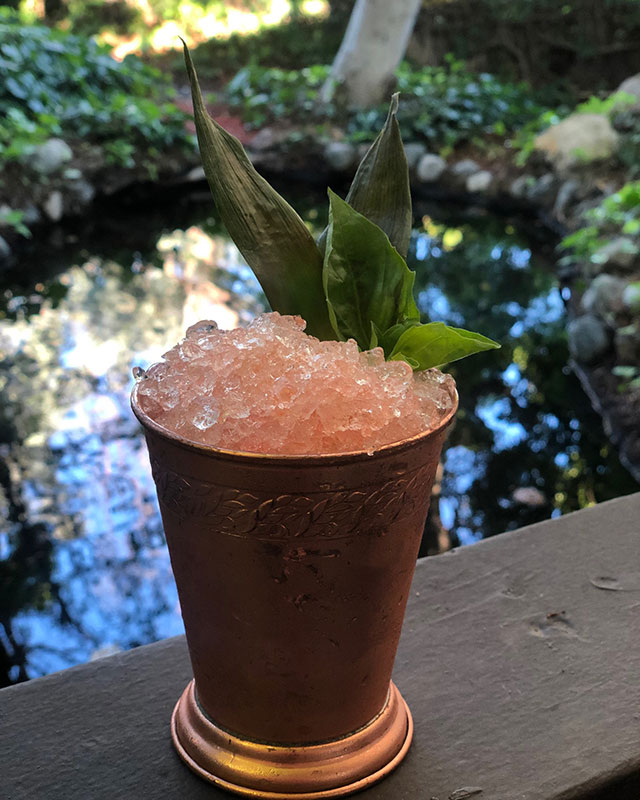 Located in the hills of Orange County, Orange Hill, boasts sweeping views of Catalina Island, Downtown Los Angeles, Disneyland’s magical firework show and our beautiful California coastline. Fittingly, the restaurant and O Bar bar/lounge offers a cocktail named after a famous Disney swashbuckler. The Jack Sparrow Mule is made with Plantation Pineapple Infused Rum, lime, ginger beer and cherry bitters. Yo ho, yo ho, a pirate’s life for us! 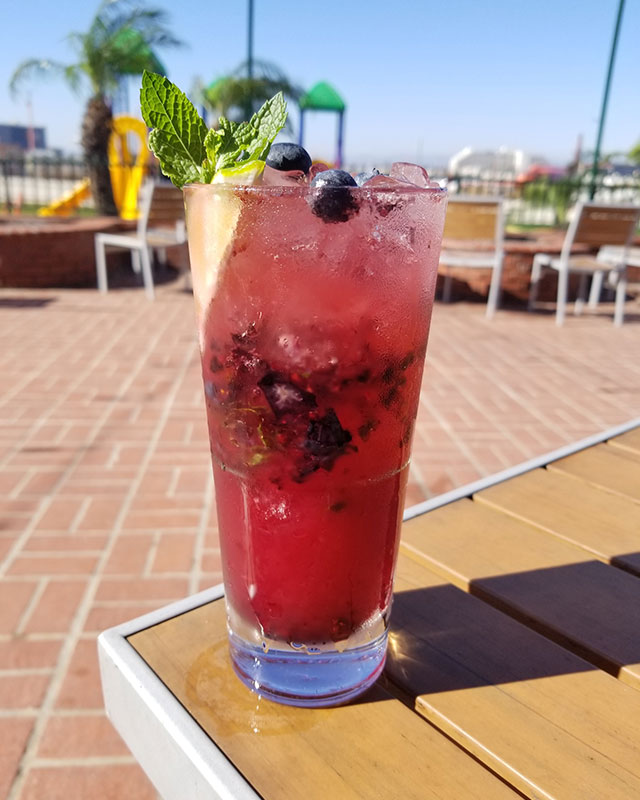 Rum fans have been flocking to The Proud Bird in El Segundo to try the Puddle Jumper Wild Berry Mojito. Made with Bacardi Rum, agave, lime juice, soda water, mint and seasonal berries. This summery cocktail is best enjoyed while enjoying the floor-to-ceiling windows overlooking the runways of LAX airport. 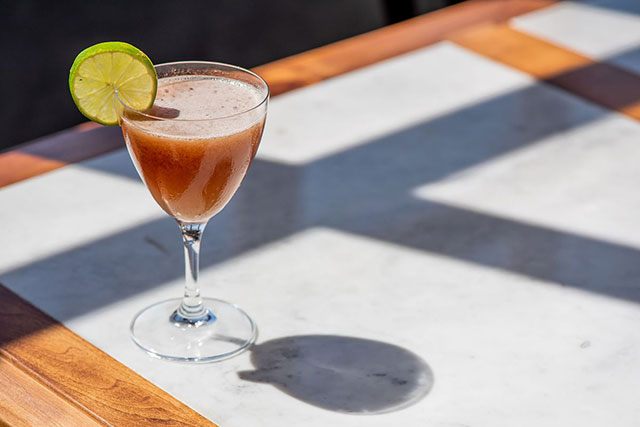 Israeli hotspot Jaffa first opened on Third Street last year and welcomed a sister location in The Palms just this summer. In addition to a mouthwatering menu stacked with regional items such as North African Chickpea Stew, Lamb Couscous and Hamshuka, the restaurant also boats a killer cocktail menu. Check out the Fig, made with a house blend of aged rum, pineapple rum, lime and fig preserves. 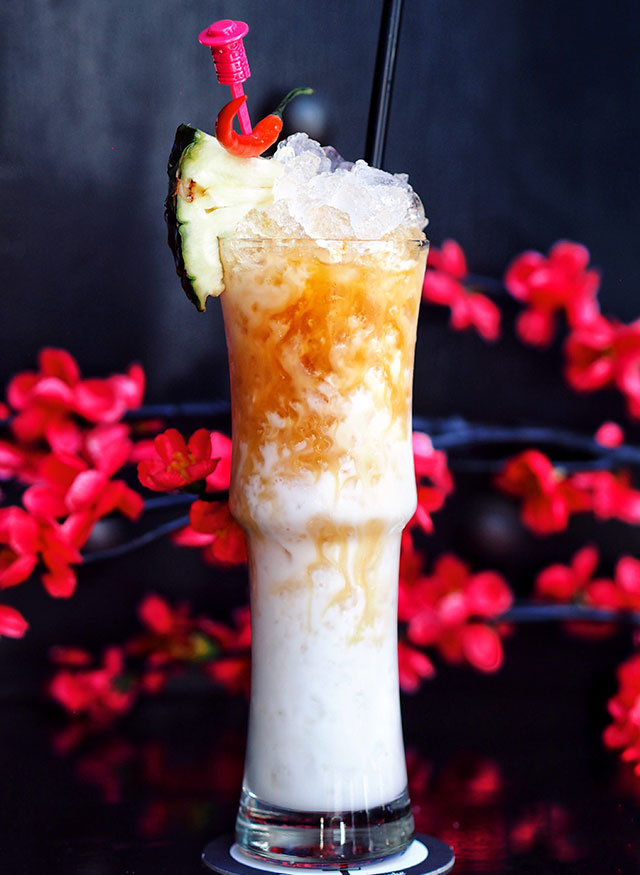 Sing it with us: “Hakuna Kolada, what a wonderful drink!” Have no worries for the rest of your days at Blind Dragon. This cocktail made with white rum, coconut cream, chili, lemongrass, kaffir lime, black tea infused dark rum float. Fitting that Blind Dragon is also a karaoke bar. 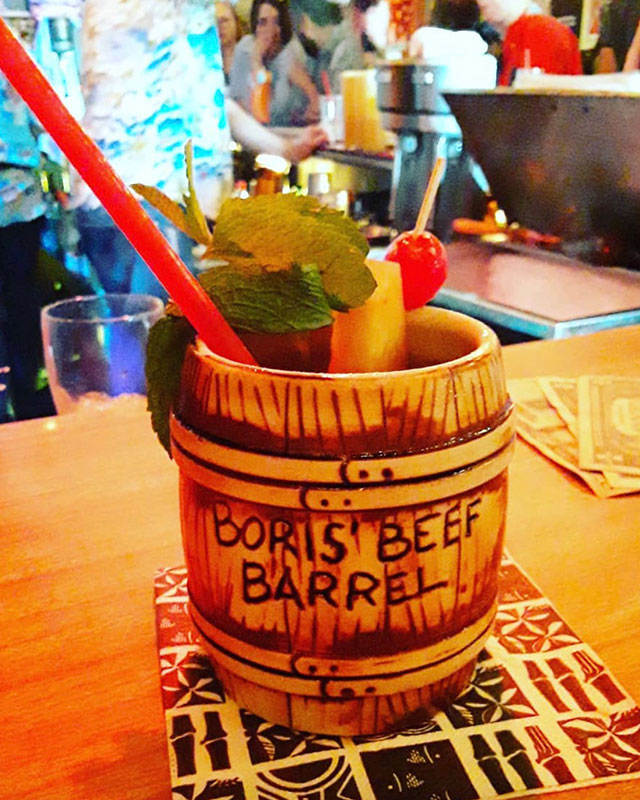 Tiki-Ti in Hollywood, which opened in 1961, is a local landmark that whips up tropical drinks in a tiny room covered in tikis and Hawaiian decor. Itching for the perfect tiki cocktail? Try the orange and mint flavored Tropical Itch made with 151 Rum, passionfruit and fresh mint.

The popular chain bakery/eatery Marie Callender’s, famed for its pies and American fare has gotten into the cocktail game. Just in time for National Rum Day, they launched their Sparkling Hibiscus Breeze cocktail made with lime rum, Hibiscus syrup, cranberry juice and a splash of club soda. Best part? It’s only $4. 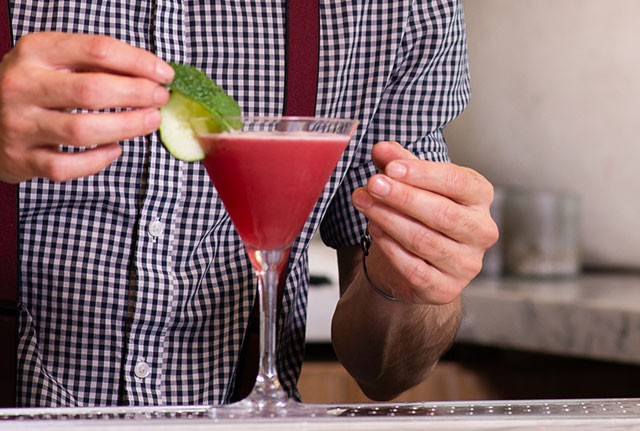 Gratitude Kitchen & Bar is an organic plant-based restaurant and cocktail bar in the 90210. Perfect for the run holiday, beverage Director Maxwell Reis created the Summer Punch made with spiced rum, orange, pineapple, lime and allspice. 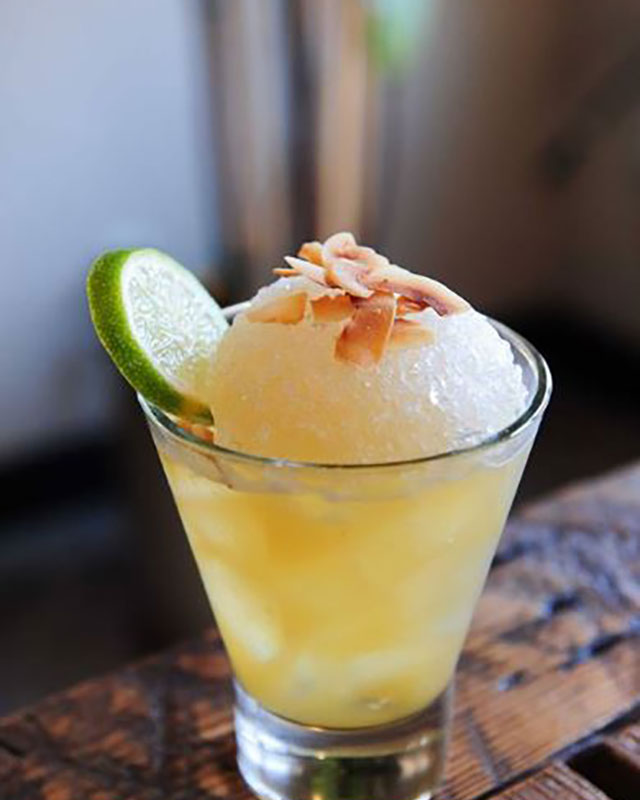 Grab a friend, colleague or even your mom and dad and make your way over to go-to neighborhood spot, Granville for National Rum Day. Enjoy a selection of handcrafted cocktails including the Lazy Daze, made with toasted coconut-infused selvarey rum, coconut nectar, pineapple, lime and coconut shavings. As you sip on the summertime inspired beverage, indulge in any of Chef Glenda’s wholesome recipes including the fan favorite Uptown Mac and Cheese. 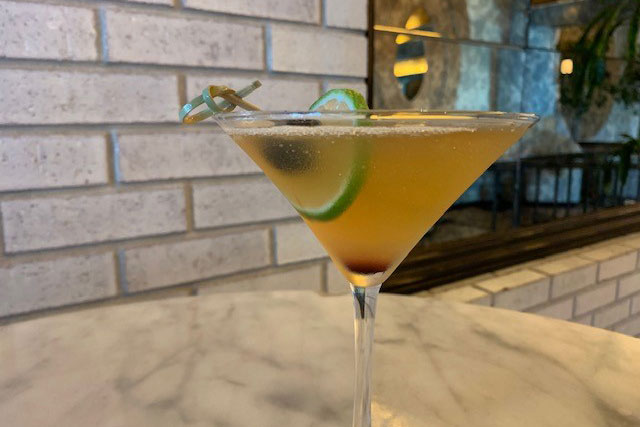 Located inside the W Hollywood, Delphine is an expansive, indoor-outdoor space facing bustling Hollywood Boulevard. Aptly named the Bright Lights, try one of the restaurant/bar’s most popular cocktails made with Bacardi Select Aged Rum, triple sec, lime juice and fernet-branca. 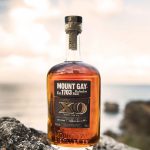