Halloween is creeping around the corner but this year, skip the tricks are imbibe in some hauntingly good liquid treats. From bewitching brews to potent potions with BOOzy spirits and festive fall flavors, check out these 31 freakishly good drinks to enjoy this spooky season in L.A.

This Is Halloween at Beetlehouse 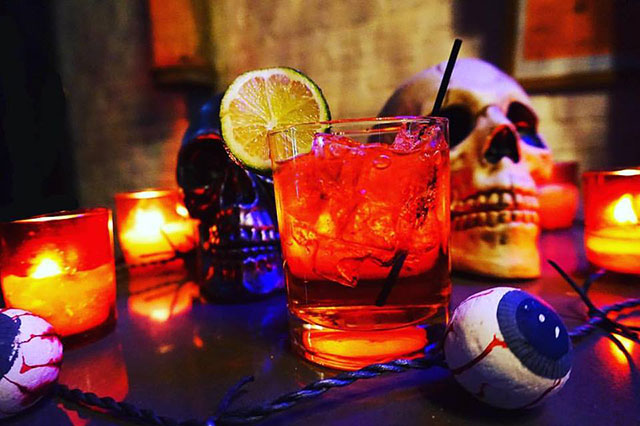 Over at Beetlehouse, the motto is “Halloween Everyday.” Adorned with vintage chandeliers, shrunken heads and Tim Burton themed bar in Hollywood serves up the This Is Halloween cocktail, named inspired by the iconic song from the film “The Nightmare Before Christmas.” It’s made with Fireball, sour apple, pumpkin liqueur and apple cider with a freaky yet festive result. 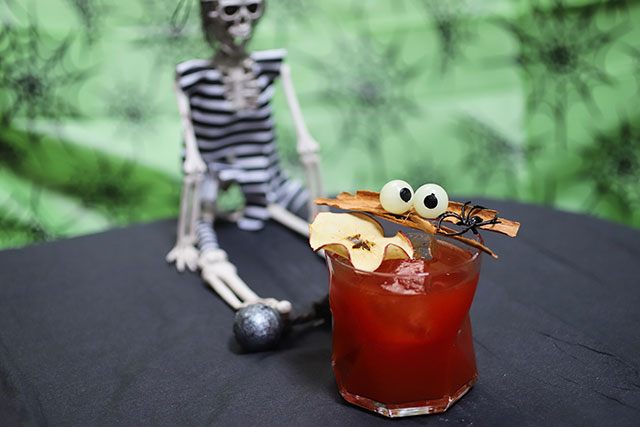 Los Feliz’s buzziest new neighborhood restaurant, Atrium, will take part in the Halloween shenanigans this year by giving out candy to all of the little trick-or-treaters passing by early in the evening along Vermont Avenue. As the evening progresses on Thursday, Oct. 31, the restaurant will serve up an array of specially-prepared spooktacular bites like Scary Wat Wings, Pumpkin Puke Human and Ghoulie Crab Rangoon. There will also be spirited cocktails for adult revelers, created by Beverage Director Jordan Young, including the Nightmare on Vermont St. made with gin, Drambuie, Krogstad, Atrium Gloog, orgeat, lemon and angostura. 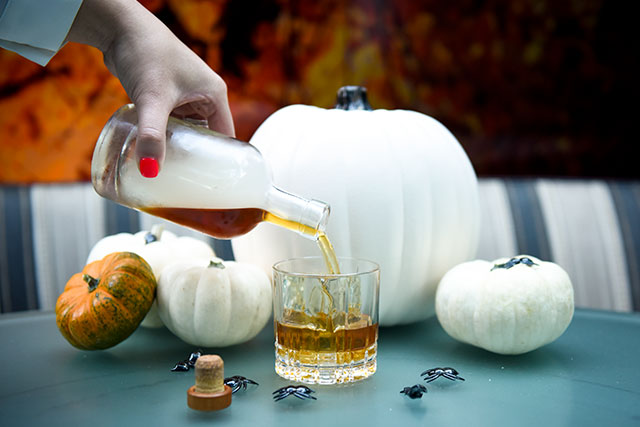 Even the fanciest places in L.A. can get freaky for Halloween! At BOA, West Hollywood’s chicest steakhouse, the Spooktacular Smoke Show is spooky sipper made with Wild Turkey Longbranch Bourbon, maple syrup, orange bitters and applewood smoke. 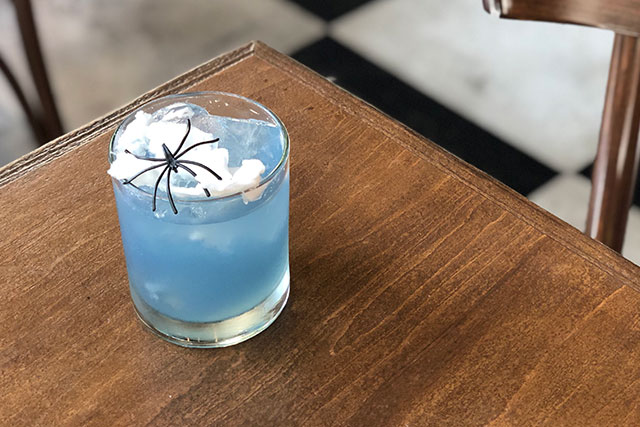 Charlotte’s Dead is the perfect cocktail to scare away those creepy crawlers and their webs this Halloween at barcito in DTLA. This classic Aviation cocktail created by barcito owner Andrea Borgen lures in ghosts and guests with gin, The Bitter Truth Violet Liqueur, Maraschino, fresh lemon juice, and a cotton candy and spider garnish, so chug the Charlotte’s Dead and those chilling cobwebs at barcito. 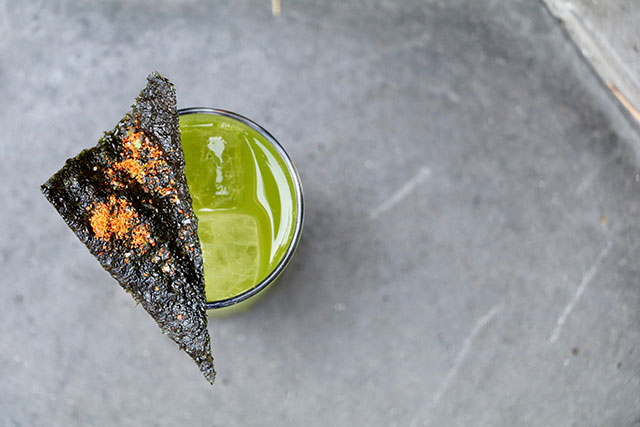 It’s officially Halloween time and Inko Nito in the Arts District is celebrating with their Green Goblin cocktail. Available now through Halloween, the mean green cocktail, created by Nathan Merriman, is made with Suntory Roku gin, Sudachi shochu, yuzu, matcha & tonic and garnished with crispy nori and shichimi. 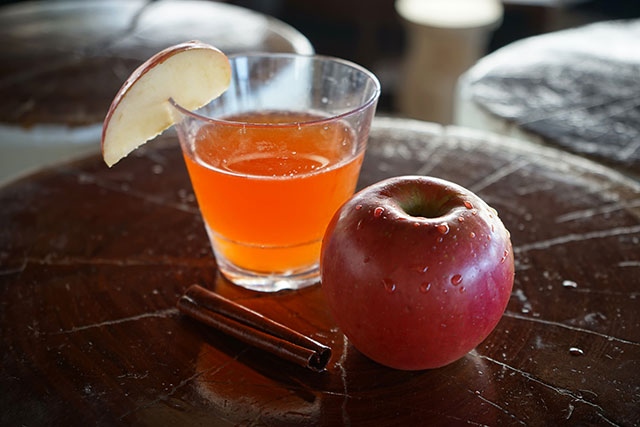 Go bobbing for booze poolside at West Hollywood Skybar at Mondrian with the Candy Apple Crush. The adult take on this childhood favorite treat is made with Aperol, Angry Orchard Apple Cider, Disaronno, lemon juice and black walnut bitters. 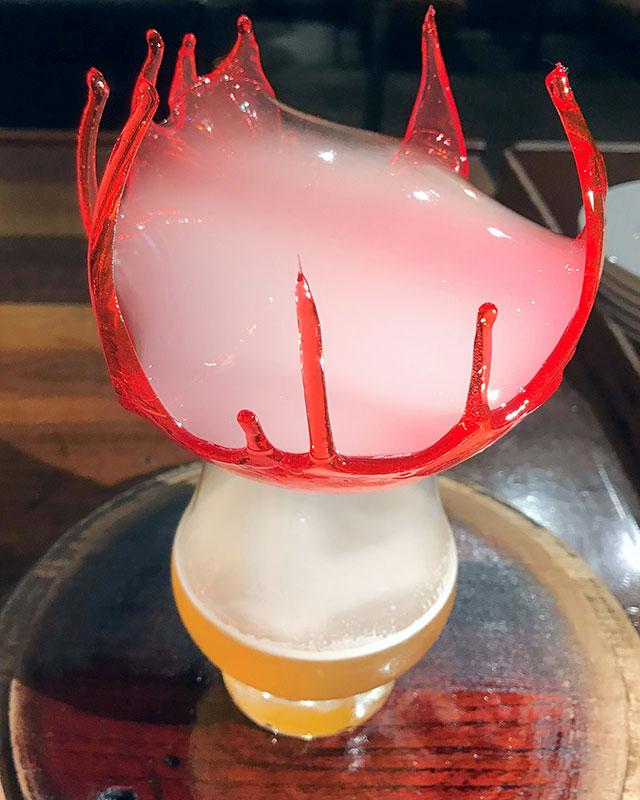 The District in DTLA will suck you down to the underworld with its Halloween cocktail, the Devil’s Claw made. The Lucifer-approved libations is made with Slivovitz plum brandy, Luxardo liqueur, Cointreau, lemon juice, topped with a sugar bowl filled with a berry vapor bubble. 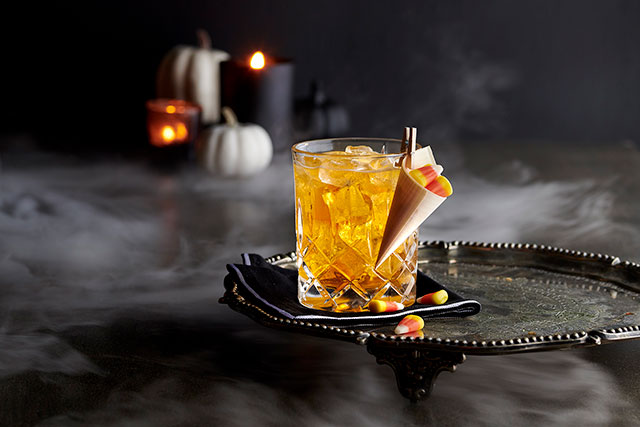 Morton’s The Steakhouse, Los Angeles is located just four blocks from the Staples Center so before you cheer on the Lakers, Clippers or Kings Hockey this October, swing by the two-story restaurant and order the Candy Corn Old Fashioned. The spirited cocktail, made with Jack Daniels, orange bitters and Monin Candy Corn Syrup is available now until Oct. 31 and is garnished with candy corns placed in a bamboo sidecar that is clothes pinned onto the top of the glass. Best part? The drink is also a part of Morton’s Happy Hour Pour Hour. Now that’s a scary good deal!

Bobbing For Apples at Sushi Roku 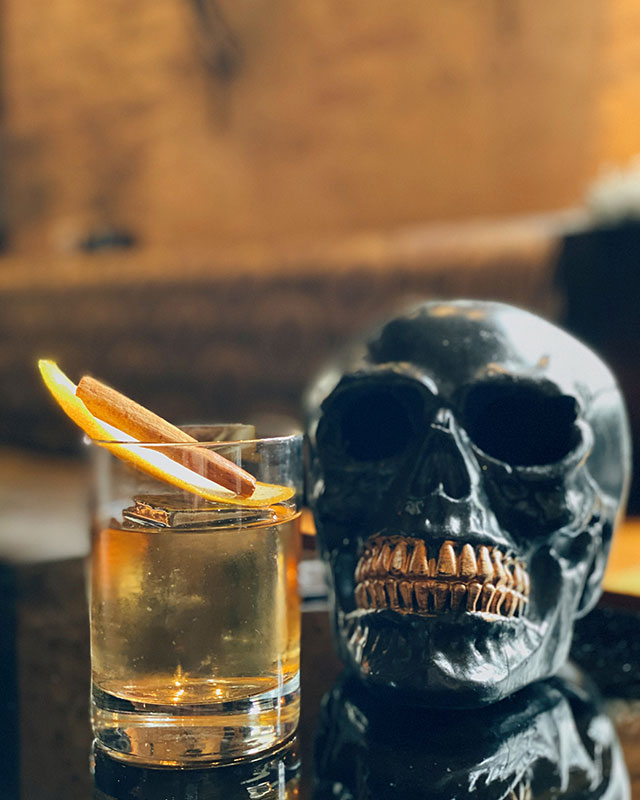 Way more fun than the old school game, Sushi Roku’s Bobbing For Apples cocktail is made with Rittenhouse Rye Whiskey, Lairds Apple Brandy, demerara syrup, angostura bitters, orange bitters and garnished with a dehydrated apple slice and cinnamon stick dipped in 151 or so it smokes when it. 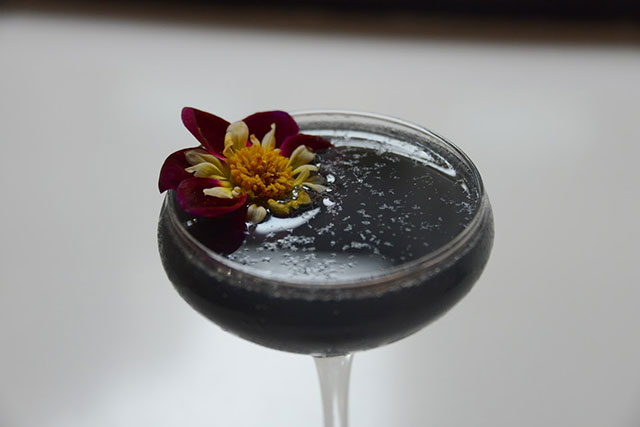 The ghosts are definitely out and about this Halloween, and the spirits are especially alive at HATCH Yakitori + Bar as Bar Director James Fastiggi has resurrected the Ghost of Graveyard. This ghoulishly spooky cocktail is comprised of Fords Gin, lemon, Yuzu Liqueur, lavender, honey, and activated charcoal. Fastiggi scares and dares guests to come experience the dark side this Halloween at HATCH Yakitori + Bar. 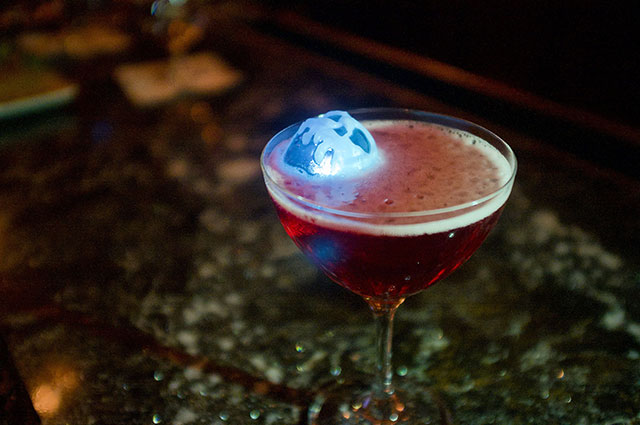 Disneyland’s California Adventure is not only home to the Pixar Pier, Cars Land and The Incredicoaster, the park also boasts a number of restaurants and bars serving up some villainous cocktails this season. The old Hollywood themed bar Carthay Circle bar is pouring the Poison Apple-tini, inspired by the Evil Queen in “Snow White.” The wickedly creative drink made with apple whiskey, apple schnapps and cranberry juice with a light-up poison apple bobbing up and down in the martini glass. The cocktail is also available at the Disneyland Resort hotels. If you’re feeling extra festive, visit during the Oogie Boogie Bash, the Halloween spooktacular on select nights this month. The celebration features trick or treating, a frighteningly fun parade, Graveyard JamBOOre, creepy treats and more. 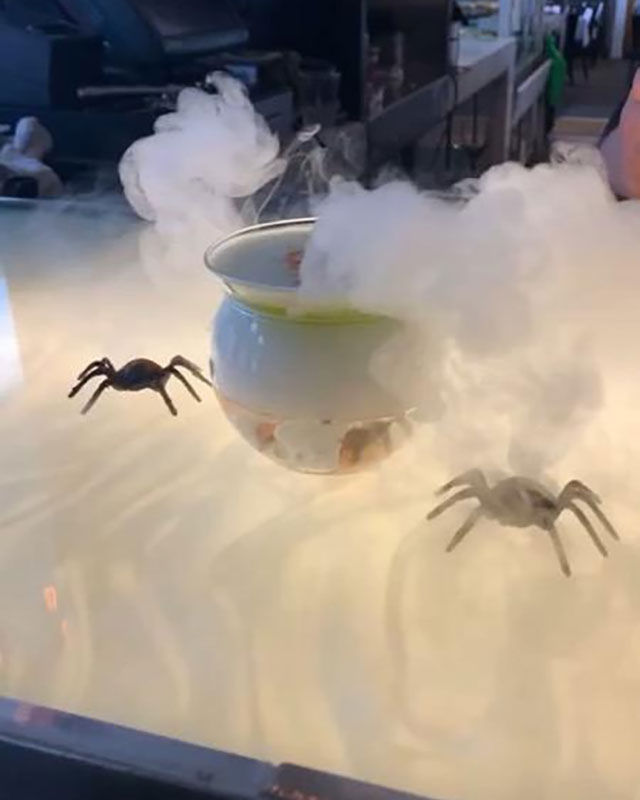 Calling all witches to summon the demon spells this Halloween by sipping Bar Manager Nikos Baltas’ Wicked Sour at Mi Piace. Warning! This bubbling brew made of Midori, Evan Williams Bourbon, fresh lime juice, lemon juice and egg white, can cause witching behavior at Mi Piace under this Halloween Moon! 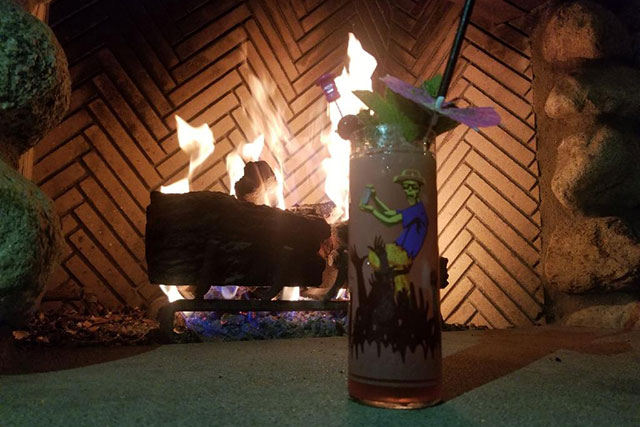 It is the night of the living dead this Halloween at the historically haunted The Raymond 1886 and Head Barman Jesus Gomez has resurrected a bone-chilling cocktail that dates back to 1934 when Ernest Raymond Beaumont Gantt, better known as Don the Beachcomber, created the Zombie. This frightening mixture is made with white and aged rum, Angostura bitters, lemon and lime juice, curacao, grenadine, and passion fruit syrup, garnished with mint and grated nutmeg.

Something Wicked at Clifton’s Republic 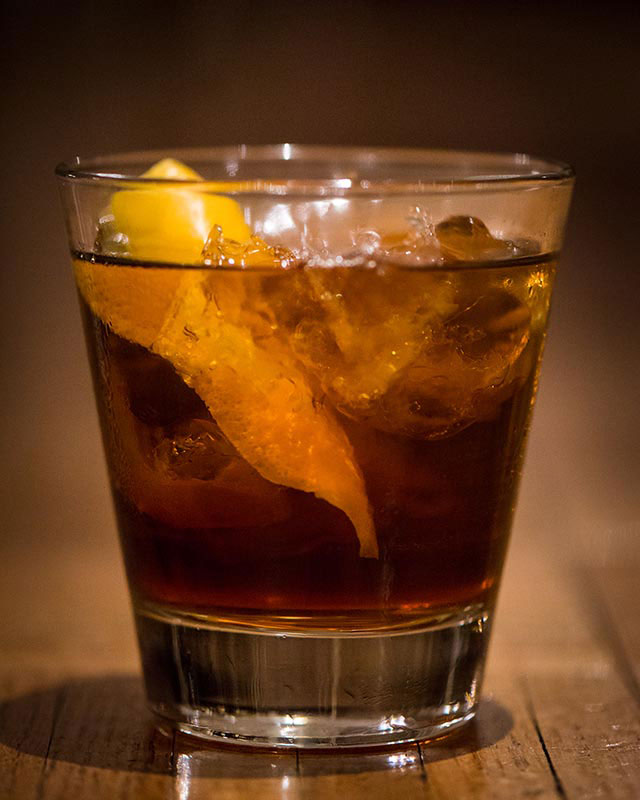 Inside Clifton’s Republic’s Cathedral Grove lies the magnificent Gothic Bar, the home to the sinfully savory Something Wicked cocktail. Made with Clyde Mays, El Silencio Mezcal, angostura and mole bitters, this ominous concoction is served over ice with a flamed orange peel. The drink is definitely a perfect mix of whimsy and wickedness.

Captain Jay’s Punch at the Backyard at Chez Jay 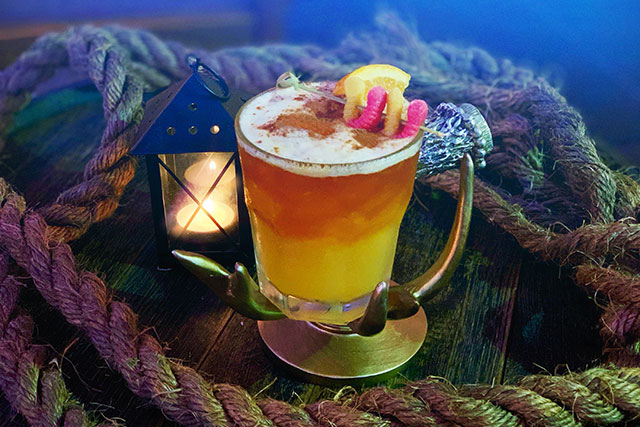 Head to Santa Monica for a thrilling night filled with terrifyingly terrific tricks and treats at The Backyard at Chez Jay, Guests will not want to miss this beachside bungalow transformed to a haunted Shipwreck Cove Halloween Bash on Oct. 31. Ghosts will howl for a swig of Captain Jay’s Punch. Bartender Seth Bol has channeled the afterlife with this potent punch made with Bacardi, Ramazzotti Amaro Liqueur, pineapple juice, lime juice, a float Goslings Dark Rum, and gummy worm garnish. 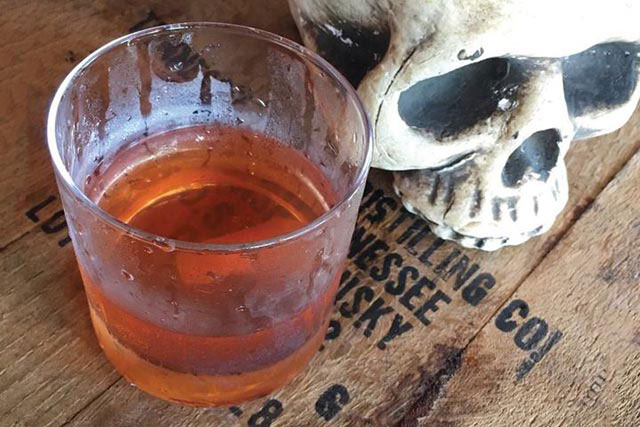 With a name like Boneyard Bistro, you know this Sherman Oaks spot has a menu to die for. For a cocktail that aims to put you six feet under, sip on the Coffin Varnish made with Old Overholt Rye, St. Germain, Peychauds, rhubarbs and grapefruit bitters. It’s served chilled with a twist and a spook. 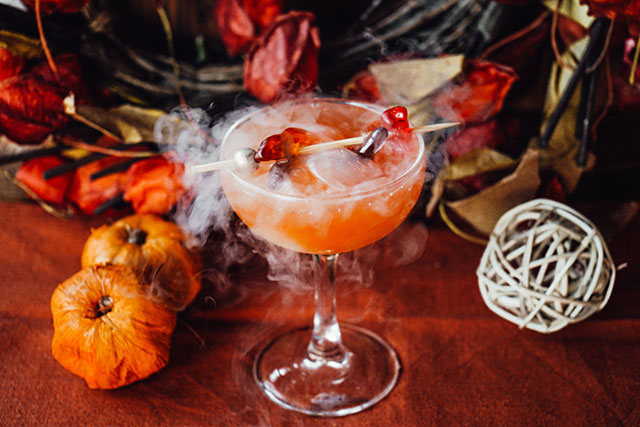 Children of the Corn at Spare Room 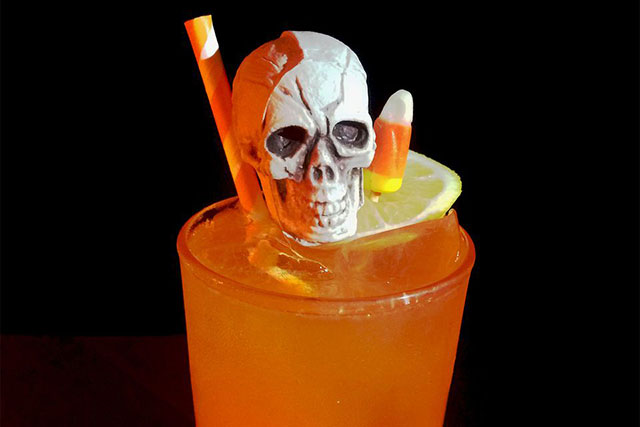 The Hollywood Roosevelt Hotel is considered one of the most haunted places in Los Angeles, as the ghosts of legends Marilyn Monroe and Montgomery Clift are said to roam the calls. Keep your eyes out for these spirits over a cocktail at The Spare Room bar. For Halloween, Bar Director Yael Vengroff created the Children Of The Corn made with homemade candy corn-infused vodka, seltzer, lemon juice and candy corn garnish. 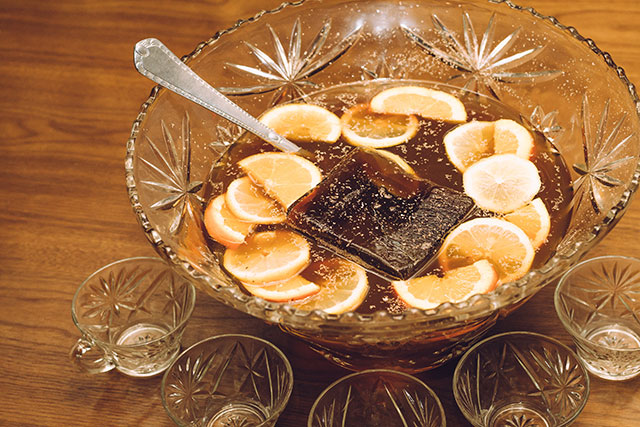 Grab your guys and ghouls and make your way over to the 1950s-themed underground cocktail lounge Birds & Bees. and get into the spirit with the shareable Twilight Zone punch bowl. The terrifying made with white rum, overproof rum, blackstrap rum, Batavia arrack, crème de pêche, lemon, lime, pineapple, orange and jerk spice. 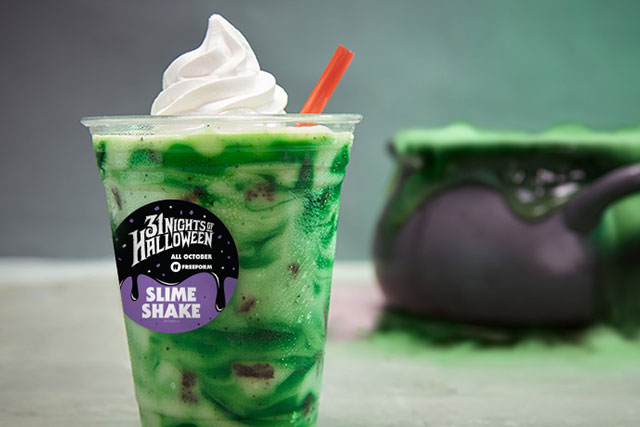 Sober spooks, this one’s for you!  Nothing serves up Halloween cheer and fear like Freeform’s ‘31 Nights of Halloween’ and there’s no better spooky movie marathon snack than ice cream. Carvel Ice Cream and Freeform have teamed up for the first time ever to offer a limited edition “31 Nights of Halloween” Slime Shake to make your Halloween a little more treat and a little less trick. Available until Oct. 31 in all Carvel shops nationwide, the cookies-and-cream-flavored shake is made with Carvel’s signature vanilla soft serve ice cream blended with Oreo cookies, Carvel’s edible slime and topped with whipped cream. 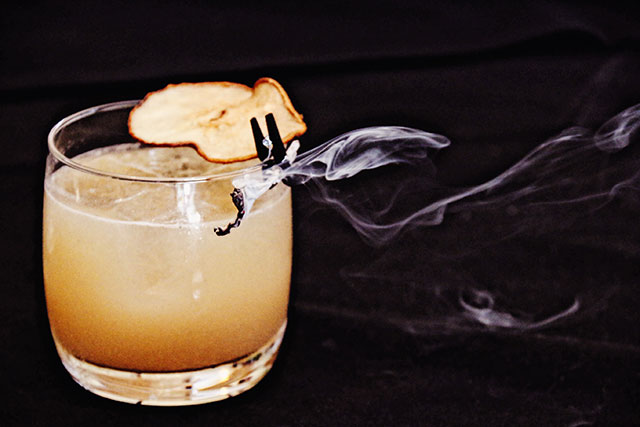 Perched over Hollywood Boulevard, Yamashiro is known has had one of the best views in town, but it also has a century’s worth of spooky history to back it all up. Previous owners are said to still walk the inner courtyard where their ashes were laid to rest and night time security guards have consistently reported strange bumps in the night. Feeling brave? Grab a Playful Secrets cocktail here made with Altos Tequila, lime, Dashi syrup, Japanese Pear purée and garnished pear and burnt white sage.

Land of Sunshine at Katsuya 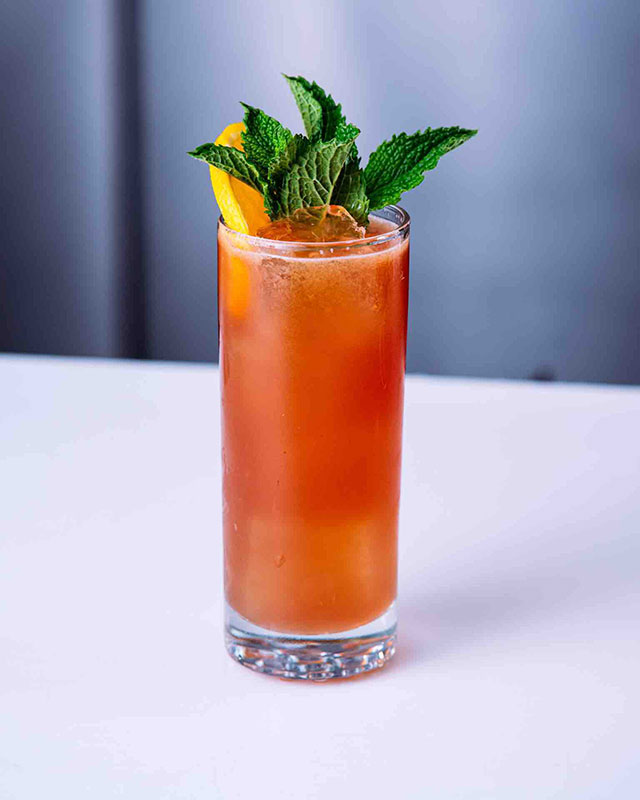 Don’t let the sweet name fool you. The Land Of Sunshine cocktail at Katsuya is named after the Japanese zombie movie franchise. The creepy colorful drink, available at both the Brentwood and Hollywood locations,  is made with Bacardi 4yr., Zacapa Rum, Lejay Creme de Cassis, lime, boiron passion fruit puree, Fever Tree Ginger Beer and garnished with orange and mint sprig.

Is The Rum Gone!? at Roku 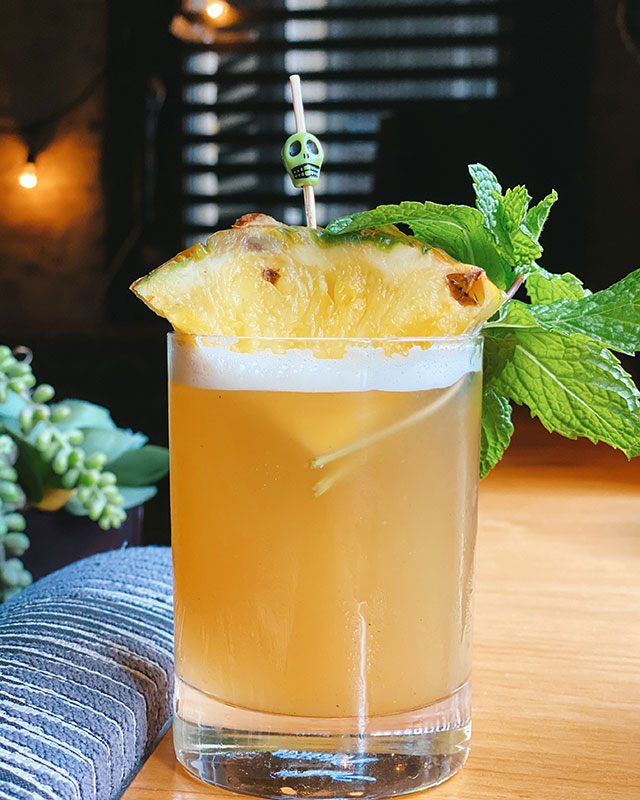 Drink like a pirate at Roku! A nod to Jack Sparrow. the Is The Rum Gone?! cocktail is a freaky tiki drink made with Bacardi Reserva Ocho, pineapple cordial, pineapple juice, lime juice, angostura bitters and garnished with pineapple leaves and skull pick. 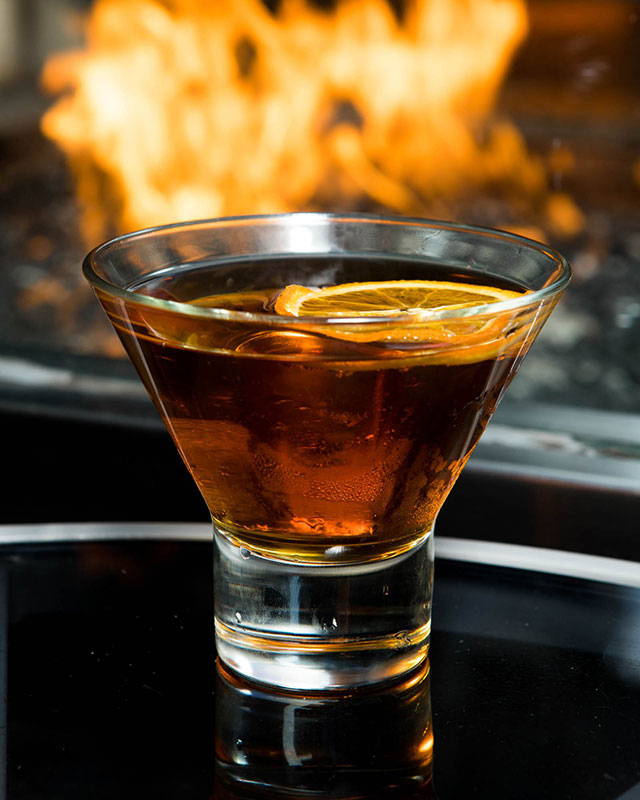 Cozy up with a Batched Orange Manhattan at The Living Room, the stylish lobby/small bites bar inside the W Hollywood. The pumpkin-colored concoction is made with Woodford Bourbon, Nonino Amaro, Gran Marnier and orange bitters and is recommended to pair with bites of Terry’s Chocolate Orange. 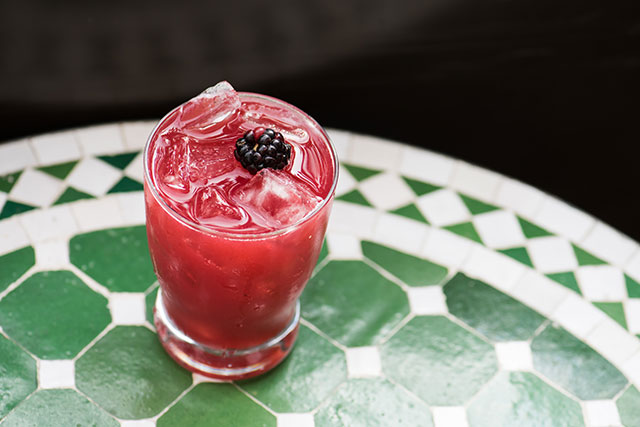 Step into the dark abyss! At Cleo, the BlackBerry Abyss cocktail is made with Grey Goose Vodka, St Germain elderflower liqueur, simple syrup, lemon and blackberries. 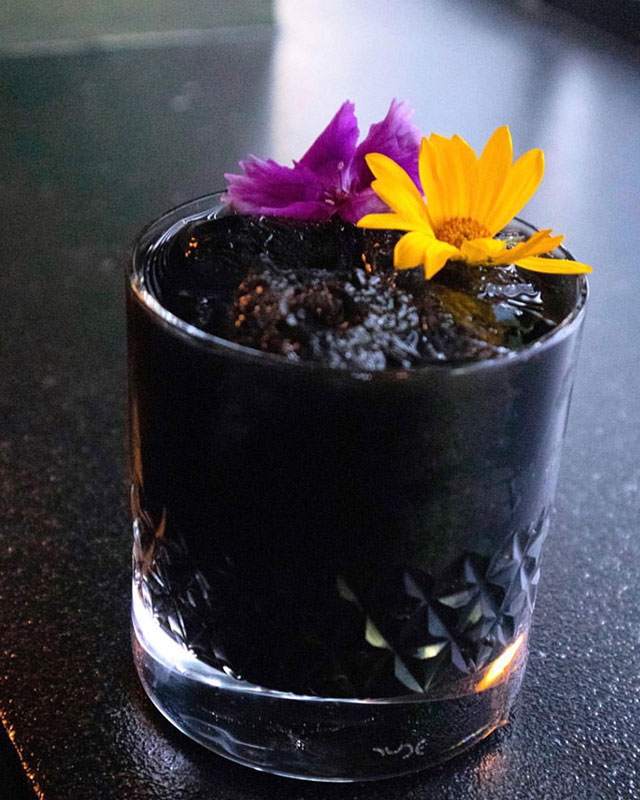 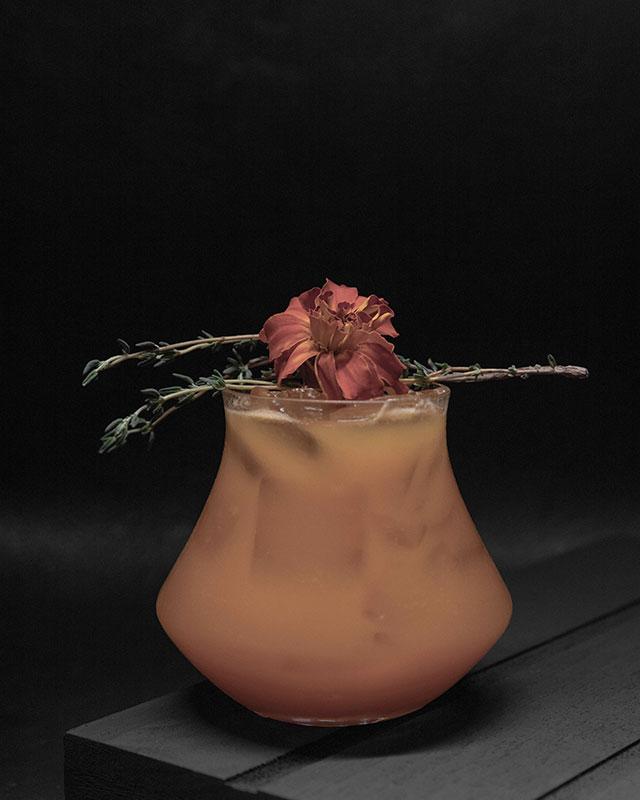 With Day Of The Dead just around the corner, head over to Mexican hotspot Toca Madera where Beverage Director Charity Johnston recently created the Ritual. The eerie cocktail is made with El Silencio Mezcal, ginger root juice, carrot juice, lemon juice and wildflower honey, garnished with greens and an edible flower.

The Bloody Berry at Katana 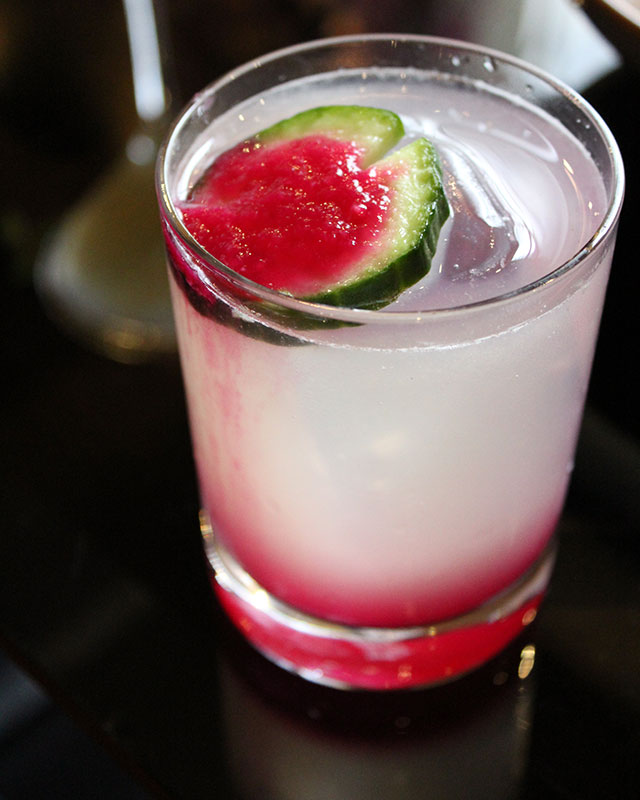 Summon your inner Dracula and have a bloody good time at Kantana. Suck down their Bloody Red Berry cocktail made with CÎROC Red Berry Vodka, cranberry puree, tonic water and fresh cucumber. Pair it with the restaurant’s Tuna Jalapeño dish made with Spicy Tuna, avocado and topped with tuna sashimi, yuzu olive oil and cilantro.

A $1 cocktail sounds more like a trick but at Applebee’s it’s a real treat. The chain’s new $1 Vampire has emerged from its coffin to charm Neighborhood Drink of the Month fans with its freaky tiki tropical flavor. It’s made with rum, strawberry, passion fruit, dragon fruit, and pineapple juice and is served with vampire fangs and a cherry. Unlike real vampires, the new $1 Vampire won’t live forever so get the terrifyingly tasty cocktail while you can. Mwahahaha! 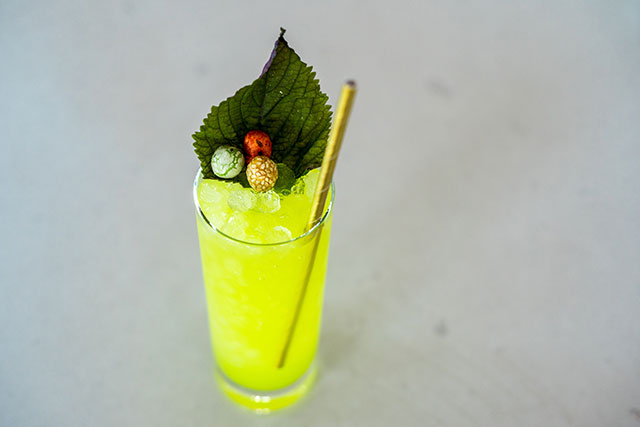 At Nights of the Jack, Angelenos have the opportunity to immerse themselves in a Halloween wonderland, filled with thousands of hand-carved Jack O’Lanterns across a half-mile trail. The grounds are also home to The Spookeasy Bar which serves specially crafted Halloween cocktails like the Tokyo Melon, a mean green spicy drink made with Japanese Whisky, Ketel One Cucumber Mint Vodka, Midori Green Melon, yuzu juice, a dash firewater, topped with ginger beer and garnished with shiso leaf and Japanese candies.

Wake The Angels at Henry’s WeHo 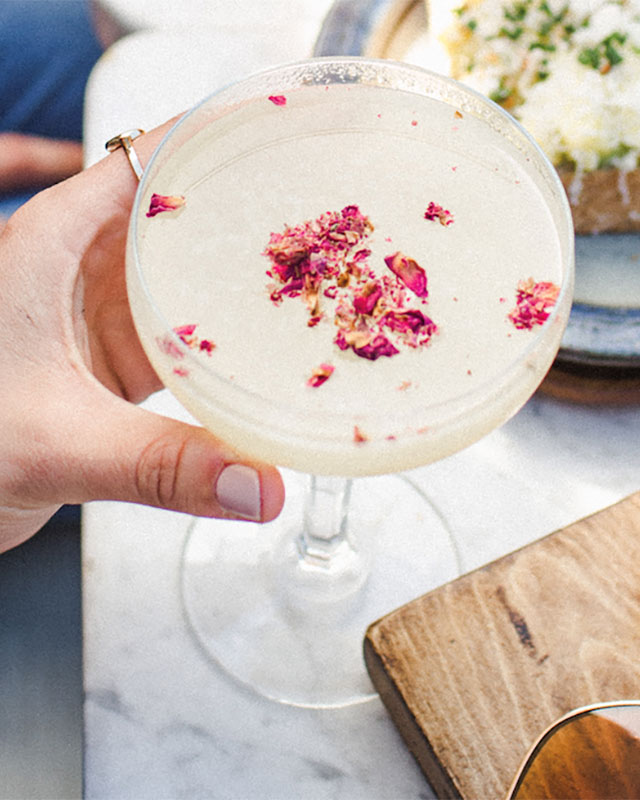 Halloween may be synonymous with devils but angels are on your side over at Henry’s Weho. Protect yourself from spirits on the patio and order the Wake the Angels made with Hendrick’s Gin, rose petal, grapefruit, yuzu and sparkling wine.

What To Drink at SEED Food + Wine Week in MiamiFeatures