A Historical Bar Crawl in and Around NYC’s Union Square

“You don’t go out in New York City looking for a party. You need to bring the party with you.” So says Dale DeGroff, famed bartender and major architect of this town’s drinking culture*.

He’s not wrong – the bars in this city are only half of the equation. You bring the party, and we’ll handle the rest.

I hope I’m not being too hyperbolic when I say that no city in the world as more history in it than New York City. Not Moscow or Athens or London or Cairo. Those cities may be older, may be the seat of monarchs, may have seen wars or philosophers or epochs pass through. Some of them might even have been around in the Bronze Age. Still, I’m willing to make the argument that more has happened in New York City in its (relatively) short existence. This column is not about the entire history of New York City, just that which relates to its drinking establishments, and a bar crawl that’ll transport you through it.

Still, I’m willing to make the argument that more has happened in New York City in its (relatively) short existence. And making a stop at these stories bars is like a historical crawl through history.

So check out these spots around NYC, where you can get a cocktail – with a side of the past. 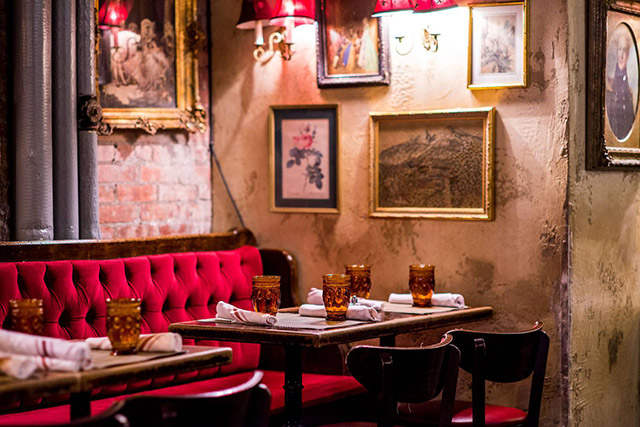 The décor at this will transport you out of 2018 New York City entirely, a good reminder that this particular bar crawl is not about the here & now, but about then & there. The marble columns behind the bar, the portraits hanging on the brick walls, and the lanterns hanging from the ceiling exude propriety, and you’ll want to sit up straight and energetic at the bar.

It’s a thin space, not much breathing room behind the bar stools, which makes it a good secret stop for the core crew. To improve the already well-established ambiance, an informal band of musicians sometimes appear on Saturday afternoons, jamming out to old Irish folk songs. It’s a real treat for the ear, if you can catch them. 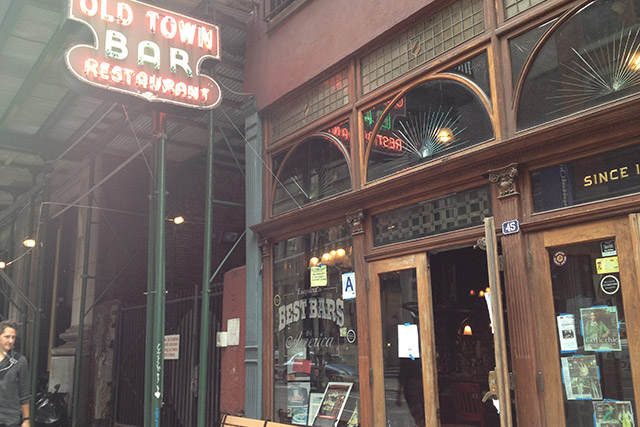 This classic tavern opened in 1892, operated continuously through Prohibition due to their association with Tammany Hall, and features the oldest dumbwaiters in New York City and a few iconic 1910 Hinsdale urinals in the men’s room (sorry, ladies). Everything around the place speaks to its long reign in NYC, from the book jackets & photographs on the wall, to the mahogany and marble bar, to the neon sign outside on 18th Street. But perhaps, nothing is more important to the bar’s history than its feature in the music video for “Jump Around” by House of Pain, filmed in 1993 (this is one man’s opinion).

Old Town Bar makes for an excellent official first stop for your bar crawl. All the items have stories, and as your fellow crawlers tumble in, there’s plenty to point to and chat about, and usually enough space to gather round and tell stories, whether your own or that of the bar itself.

Whatever your fancy, order up a glass of wine or a craft beer, and ponder your forebears, be they actors or rappers or authors or Tammany Hall pols, at the original lunch counter, or in one of the snug booths, or in the quieter second floor dining room. As the crowd gets more and more raucous downstairs, slip your cell phone in your pocket and think about how some things in this town never do change. 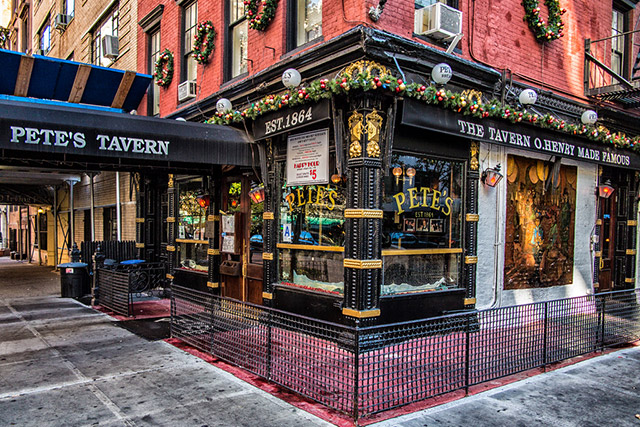 So many people have walked these city streets, but the footprints of some folks are a bit weightier than others. In the early 1900s, when the bar was known as Healy’s, famed author O. Henry lived down the street, and his life became intertwined with those of the characters in the bar, so much so that the bar makes an appearance in his story “The Lost Blend.”

If you’re bringing a whole slew of folks with you on your bar crawling, it can feel a bit tight, but a crowded bar is old hat to Pete’s. Claim a booth, recede to the dining room to try out the burgers and Italian food, or just cozy on up to your nearest neighbor – all viable options in a bar that lodges a fairly reliable claim to the title of “Oldest Bar in New York City”. This location has been serving New Yorkers since the 1860s, so think on everyone else who’s held a pint of beer between the tile floors & tin ceiling next time you’re there. Regardless of whether you have plans to write a short story, you’ll find something to write home about here. 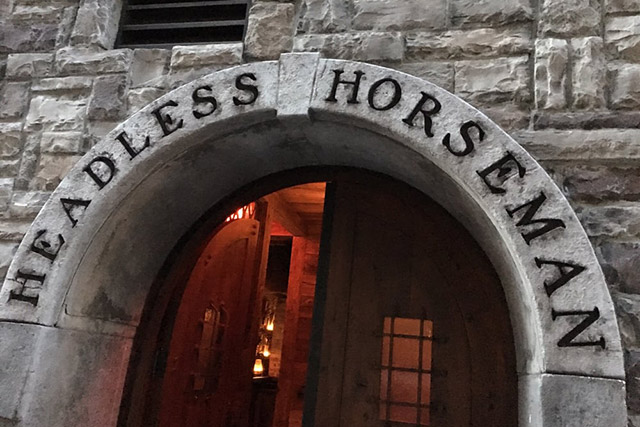 This one is a different sort of historical bar. Just down Irving Place from Pete’s Tavern, this beer haven takes its inspiration from the street it’s on. Like its neighbor Ichabod’s, it dresses itself in the garb of the stories of Washington Irving, author and creator of Rip Van Winkle, the Headless Horseman, Ichabod Crane, and several other stories about the Hudson River valley. It wasn’t so long ago that paintings of British King George III were replaced around the city’s taverns with portraits of George Washington. The Headless Horseman harkens back to that time.

A time when Broadway was a dirt road along the wooded island of Manhattan, a time when the memory of Henry Hudson was not so distant, a time when the Dutch lent their names to boroughs and the British made this bay the premier trading post in America, a time when residents began thinking of themselves as Americans above anything else.

Washington Irving was a lifelong New Yorker with stories to tell. Why not tell them here, over a pint of craft beer in the light & shadow of small windows and stone walls. Once, when I was there, a few folks dressed up in colonial attire paraded in and got to drinking. It was a bit strange, but a more welcoming sight than a literal headless horseman. 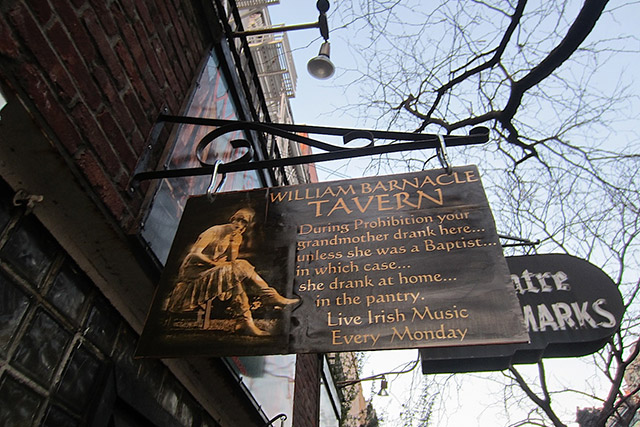 William Barnacle Tavern (can I call it Billy Barnacle?) is an old speakeasy, and feels like it. The place opened in 1922, has been running continuously since (including as a hidden bar during Prohibition) under only two owners, and, according to the Irish bartender I met two years ago, the bar holding up your elbows here is the original, the very same that held up the elbows of Lucky Luciano and Al Capone. This building also hosts Theatre 80 St. Marks and the Museum of the American Gangster.

The bar itself leans in to its subversive past, serving several varieties of absinthe, projecting old black & white movies onto a wall, and softly playing jazz, ragtime, dance music from the 1920s. It’s a quiet bar, but it was not always. Bring the crowd here, and hide from the coppers for a while. 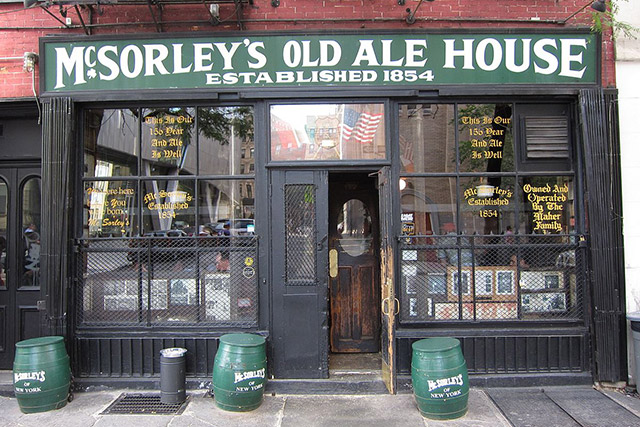 McSorley’s is king. That’s what it is.

It’s the first bar I’d recommend to anybody here in New York City, whether someone who’s lived here for more than a year yet hasn’t been or a tourist in town for the weekend. In fact, most days the place is packed with out of towners and passers-through. But that does not dim my appreciation for McSorley’s one bit. Because, decade after decade the place has always been packed. It’s been king since it opened really, and history has only accumulated on it since. It’s the one bar I’d recommend to anyone, because it’s the one that knows New York City best.

Another claimant to the longevity mantle, it’s been around it’s been called McSorley’s since it opened, and I’m not sure any decorations have been added or subtracted since World War II. Why should it? McSorley’s was old when that war ended, but it’s never aged. It was a buzzy, storied haunt when my father visited it in the 80s, and it still is now. The walls are a veritable museum of NYC and American history, its tables are solid and very good at pounding on of your small beer mugs on, should the opportunity to do so present itself.

It’s last on this list since you’ll be more likely to nab a table with your crawling crew later at night, but sitting at tables with strangers is encouraged. You have your choice of beer (light or dark) and an array of somewhat odd bar snacks (I’ll let you find that out on your own), but you won’t have a choice regarding the sawdust. That stays.

This is not a historical bar in itself, but its name conjurs up the idea of the kinds of illicit establishments found throughout New York City in the 1850s, during the days of the Dead Rabbits, Bowery Boys, Nativists and early prohibitionists. The cover fee granted you entrance to view a literal blind pig (or tiger), but as Christine Sismondo writes in her book America Walks Into a Bar, “looking at blind pigs can be thirsty work and so a drink was supplied to the patron – gratis.”**

This bar is on this list simply for the fact that Conor Oberst wrote a whole song about it, and that, to me, secures its legend.

The self-described “Most Famous Bar in the United States”, maybe you don’t need to go here to get a feel for it… the founder & owner does a pretty good job herself of explaining it all.***

Bar Crawls in NYC Bars with History
A Historical Bar Crawl in and Around NYC’s Union Square2018-02-212018-02-20https://thirstymag.com/wp-content/uploads/2016/04/thirsty-nyc-logo-1.pngthirsty.https://thirstymag.com/wp-content/uploads/2018/02/mcsorleys-idk-tonight.jpg200px200px
About
John Chamberlain
John Chamberlain has done a lot of walking, and by walking he means bar crawling. As an aspiring bar owner, he can't think of a better place for research than New York City. If you see him reading a book at the bar, feel free to interrupt. Follow his IG-worthy adventures @thebartographer. 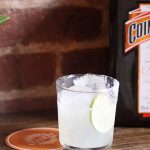 Celebrate the 70th Anniversary of the Margarita with CointreauFeatures 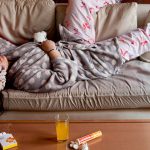