When quarantine and lockdowns swept the nation, Brown and Balanced and founder Josh Davis hosted a series of Happy Hours over on Instagram featuring bartenders, servers, and cocktail enthusiasts from all over the U.S. to share their stories and backgrounds. After taking time to rest and restore, Brown and Balanced came back to continue conversations one Friday each month, featuring a special program to highlight different perspectives from the Black Hospitality Community talking issues that matter.

There is also a hand-selected bartender featured on each session that should be on your radar. The next one, airing on Friday, November 6th on the Portland Cocktail Week Facebook page, will feature Eric Bennett, a bartender at The Atomic Lounge in Birmingham, AL and owner of the food truck Paradise Chow.

On the episode, Bennett will discuss his life, experiences and operating Black-owned food and beverage businesses in the South while also creating a Campari-based cocktail. 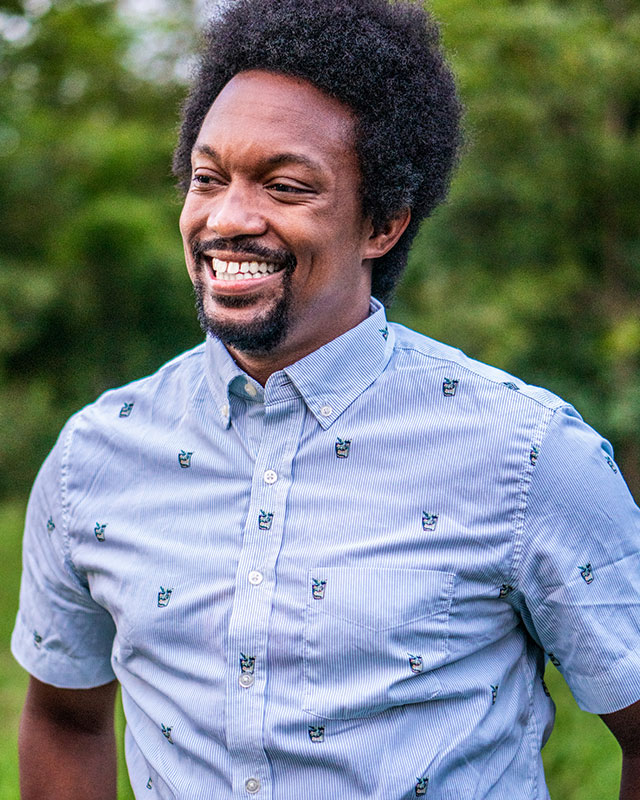 Eric Bennett, Birmingham/AL, The Atomic Lounge as a bartender; I also own a food truck called Paradise Chow.

What is the best part of being a Bartender to you?

Hitting that hospitality groove: It’s Saturday night; the bar is full, and people are still trying to get inside; the guests in my section are engaged and enjoying themselves; out of the corner of your consciousness, you can hear a song you love start playing; the service well’s drinks, and the seated guests’ drinks, and the drinks for the people standing two and three deep all sync up, so even though you’re a whirlwind of octopus arms, everyone is getting what they need quickly, and happily.

It’s a vibe.  It’s a feeling that the whole room, or at least those in your vicinity, feeds on. It’s hospitality’s underinflated tires speeding down an icy street – it’s where the rubber meets the road and it gets hot.

If you weren’t a Bartender, what would you be doing?

Before doing this, I wanted to be a doctor.  There are a lot of reasons that I am not one that have nothing to do with this industry, but it’s possible that if I never married cocktails, I would be dating the medical field.

In college, I needed to make money.  I interviewed 4 times at a chain casual-fine dining restaurant that knew I had no experience because I figured it was my best option for $/time.  Finally got hired as a server – so green; after 3 months they asked if I’d bartend. I declined because of the increased time commitment. 5 months later they asked again; I said sure.  I had one day of training, after which a bartender called out mid-shift while I was already serving on the floor. So I jumped behind the service well, and I’ve been bartending ever since.

Being Black in America 95% of the time is dealing with a constant barrage of microaggressions.  Those microaggressions are amplified in a service atmosphere, where guests feel that they can exploit the power dynamic of those “serving” them or where the application of lubrication allows for racist thoughts and behaviors to emerge.  Problematic gestures, like asking or outright trying to touch my hair once I’d grown it out, are more common while egregious examples of racism, like addressing me as “boy” with “that” intent, are rarer.  That being said, I’ve been fortunate enough to work for organizations where I’ve dealt with little overtly racist policies from bosses or actions from coworkers.

Leaders can actually provide equal opportunities and representation for BIPOC, LGBTQIA+, and women.  Hire us.  Promote us.  Put us in your cocktail competitions and on your sales teams.  Put us behind your bars prominently. Give us the platforms to speak at your 1-day, 3-day, and weeklong events.  Put us in your promotional material – and not just in the deck for “urban consumers.” It takes work – leaders and organizations have to get outside their bubble, especially the one inside cocktail bars. But in order for us to do better and be more representative, we have to actually do better and be representative.  Hire us for that thing you need, and the next thing you need, and the thing after that.

I’m a margarita. Ultimately, I would describe myself as optimistic, straightforward, able to adapt to most situations and a lover of serving and of people.  I don’t think there’s ever been a time when I’ve had one margarita and felt bad afterward, and as a drink, it’s highly adaptable to anything you want to throw at it.  Even if it starts out a little “trashy” with a powdered mix, by the time it’s in the glass, it’s mostly put together.  And on a porch or at dinner or in a restaurant, it is working in the background making sure everyone is having a good time.

With the social climate in the world today, I feel like our industry is a microcosm of society. How can you see Black/Brown Bartenders using their platforms to enact change in what we see across the bartending community?

First, it’s great to see Black and Brown bartenders able to expand and elevate their platforms.  I can really only speak for myself, and as a future bar-owner, I know firsthand the importance of hiring and training people who look like me to work for me and eventually launch their own concepts.  I know the difficulties of being the “only” at a cocktail competition or event.  So for me, it’s my job to hire diverse talent, to promote events and seminars and competitions that actively include Black/Brown leaders in the industry, and to advocate for organizations who are actively trying.  I love seeing more Black and Brown faces leading and ultimately being put in positions of power, and when given those opportunities, we have to kick open the doors further for others like us to walk through.

If you could pick a dream team – a starting 5 of Black/Brown Bartenders from your city to open a new place – who would they be and why?

This is a loaded question for me, because I am very near to being at a time where I will have to pick a dream team in real life.  So instead of answering the question directly, I’ll say that I understand the bubble that craft cocktail bartending has, and hiring outside of that bubble is difficult. Birmingham is a smaller market with incredibly talented individuals, but our industry is also incredibly insular.  On some level, I believe that’s the case no matter how large one’s market is.  I hope that when the time comes, I’ll have the opportunity to woo great BIPOC talent both from inside that bubble and definitely from outside of it.

Despite celebrity doppelganger status, I’d love to have coffee with Eddie Murphy – his transition from being on top of and the center of the comedic world to being fully committed to that Dad life is interesting to me, especially because he showed the world he can come back like Jordan wearing the 4-5 and still slay SNL. Cold-brew in the park… no waiter, no soup, no spoons… Accch-ha!

The Calamity aka “The Great Fire” 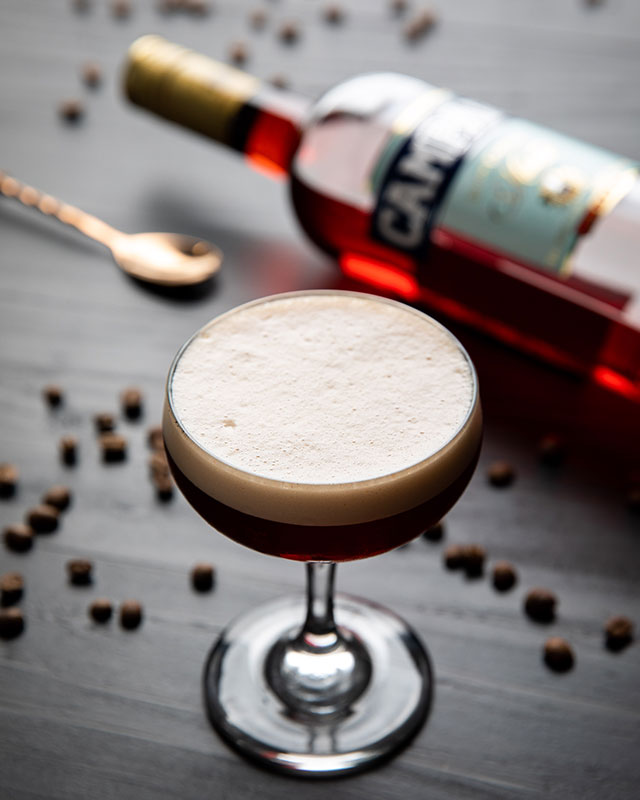 Shake all ingredients with ice for 5+ seconds until well combined. Double strain into a coupe or tumbler with no ice. Garnish with a sprig of basil. Set it on fire if you’re feeling it.

In the September issue of Vanity Fair, titled “The Great Fire,” Ta-Nehisi Coates describes the current, but by no means exclusively current, demand for racial justice through social unrest engulfing the world, the intersectionality of race, misogyny, and politics, as well as the purpose of the magazine’s theme using the poem “True Stories About the Great Fire” from Eve L.Cma
Ewing’s work 1919. His words say it best, from his ‘Editor’s Letter’:

“… a poem inspired by the belief among white Chicagoans that the first Great Migration to the city was “the worst calamity that had struck the city since the Great Fire” of 1871, which took hundreds of lives and burned out the heart of the city. The implications of this equation are haunting. Once a people become a “calamity,” all means of dealing with them are acceptable. I have not yet watched George Floyd’s murder in its entirety, but I have seen enough of the genre to know the belief in black people as disaster, as calamity, as a Great Fire upon the city, has not yet waned.”

This cocktail is for rioters and protesters – the firestarters that know in order for this country to really be free and realize true equality, it will take both heat and light.

L.A. Bar & Restaurants That Closed Permanently Due To COVID-19 HardshipsFeatures

Trick Or Treat Yourself To These Spooktacular Halloween Cocktails In L.A.Features