I first met Mr. Tim Cooper about 5 years ago, where he was shaking up amazing cocktails. Because we had a friend in common,  Tim immediately took me under his wing as if he had known me for years.  How people “treat” people says a lot, and Cooper is truly a gem of a guy treating everyone with respect, kindness and deserving of a good drink.  Over the years, I’ve spent time with Tim and no matter what side of the bar, he has always been there to greet me (and others) with a big smile and bear hug.  Although he is considered one of NYC’s top bartenders (FirstWeFeast rightfully called him one of the top bartenders to watch for in 2014) and has worked some glitzy spots, Cooper maintains his chill, laid-back, casual style without a hint of pretension. That is probably why his latest project, Sweetwater Social, has quickly risen to one of the top bars for truly great drinks and lot of fun – amazing world-class cocktails and just a darn good ole time. Trust us, go see him soon at Sweetwater Social and tell him ThirstyNYC sent ya and we bet you’ll see that famous grin we’re talking about, so let’s go Drinking with, Tim Cooper. 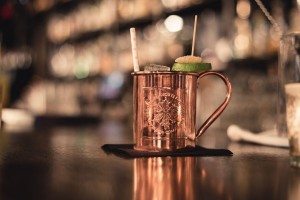 FAVORITE NYC PLACE TO HANG OUT OVER A DRINK? WHERE CAN WE FIND YOU DRINKING WHEN NOT WORKING?

For me it’s not the place, it’s the person. There are way too many great options in New York, so for me it has to do with which friend is drinking where. With that said, I’m the NYC Ambassador for Spring 44 Spirits, so when I’m out drinking I’m usually checking in on bars where I have placements.

FIRST JOB IN THE INDUSTRY?

The very first industry job was at a spot called Joe Bar on 91st & Broadway back in 94′. It was one of the original coffee bars of New York. While it wasn’t a bartending job per se, the job taught me a tremendous amount about customer service and cranking drinks out. To this day, when I walk into a Starbucks I’m appalled at the lack of urgency I see there. The slow pace is truly maddening. The actual first bar job was at the Soho Grand Hotel in 98′.

FIRST ALCOHOLIC DRINK YOU EVER HAD? WHAT WERE YOU DRINKING THE FIRST TIME YOU GOT DRUNK?

My first sip was probably from dad’s beer … most likely a Michelob. But my first really memorable experience was pulling up a chair to our refrigerator and grabbing the bottle of whiskey that was sitting up there. And as I’m sure many of us can attest, swigging whiskey straight from the bottle at the age of 9 as if it was juice, well, it kind of burns your throat just a bit. As for the first time I got drunk (not just buzzed) it was from drinking a 40oz & a 22 of Colt 45 (shout out to Billy Dee Williams!) on a hot summer day. I believe I was 16 … malt liquor was not a win that day.

WHAT INGREDIENT ARE YOU MOST EXCITED ABOUT RIGHT NOW?

Excited might be a strong word as I’m a fan of whatever’s in-season and tastes best at the moment. With that said, I’m a big fan of fresh lemon verbena.

COFFEE OR TEA? HOW DO YOU TAKE IT?

Coffee for drinking. Tea for infusing. I love coffee, but generally will have just 1, maybe 2 cups at the most per day. Definitely has to be a dark roast that has a nice rich bitter quality to it. I like tea as well, but there’s not much better than waking up to a great cup of coffee. I actually love using tea in cocktails and am often playing with tea cocktails. Jasmin Pearl & Lapsong are two of my favorites for infusing.

Water with fresh lemon juice, an omelet, and a jacuzzi. Although a nice bath will do if a jacuzzi can’t be located. And of course, a significant other to rub your head and whisper sweet nothings in your ear.

You see, now this isn’t fair because I have a LOT of favorites and I’ll definitely end up leaving way too many people out. So for this exercise, I’m going with my boy, Leo DeGroff. I think he’s under appreciated and just a “prince” of a guy. (Prince pun intended … his father, Dale DeGroff, is fondly known as the “King of Cocktails”) he works at Sweetwater Social one or two days a week, then spends the rest of his time traveling all around the country fixing & organizing bars for other people. He’s kind of like a one-man bar rescue, actually, I think he should get to wear a cape.

BEST PAIRING MEAL YOU EVER HAD & WHERE?

Eleven Madison Park is pretty next level, however, I was recently at ZZ’s Clam Bar and the Tuna Toast & Pistachio drink are off the charts! Insert championship belt <<here>>

WHERE IS YOUR FAVE SPOT FOR A SUPER CHILL NIGHT OUT OR DATE NIGHT?

WHAT ARE YOU MOST PROUD OF IN YOUR CAREER THUS FAR?

“Career” is a funny word to me. Honestly, I had no idea I would be bartending this long or even thought that this would be my career path when I first started. I’m proud that I feel really good about the relationships & friends I’ve made in this industry over the past 16 years. I run into people all the time who I haven’t seen in 5-10 years whom I had worked with at some point and the majority of the time it’s accompanied by big smiles & good stories. It’s about the people.

DO YOU HAVE A MENTOR OR SOMEONE YOU LOOK UP TO IN THE INDUSTRY? WHO CAN WE THANK (BESIDES YOURSELF) FOR YOUR DELICIOUS WORK?

I don’t have one specific person, more like a family of people from whom I learned a lot and have mentored to equip me with specific skills. It takes a village! At the SoHo Grand, I had two guys who showed me the ropes (Paul Chappell & Bruce Laurienzo) and they laid the foundation and kept me in line. Willy Shine & Aisha Sharpe are to thank for introducing me to a culinary style of bartending. Julie Reiner for forcing me to step my classic approach & technique up. And with that said, there are still so many people and bartenders from all over from whom I get inspired by and help give me new ideas & insight everyday.

STRAIGHT UPDATE & SHAMELESS PLUG TIME: WHAT ARE YOU WORKING ON THESE DAYS?

Sweetwater Social. Tightening up the screws and throwing some elbow grease into it! Seriously, my focus and attention is making sure we’re creating a non-pretentious & fun atmosphere where you can get a great cocktail and exist in a positive fun environment. It sounds simple enough but I’m working on creating a bar culture that has longevity. All great bars have that certain “something” that you sometimes can’t quite put your finger on … the “soul” of the place. That’s my job, to make sure it’s healthy. Right now, we just launched our football program for Sunday  (open at noon) & Monday and are also changing our cocktail menu for the fall. So we’re now open 7 days a week. Exciting stuff, and we’re just getting busier & busier. On the liquor brand side, for Spring 44 spirits, we’ve been working on some new products that we’re really excited about and will be launching them next year. 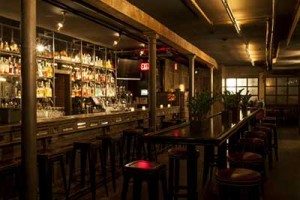 Drinking With Spring 44 Spirits Sweetwater Social Tim Cooper ZZ's Clam Bar
Colt 45, ZZ’s Clam Bar, & Jacuzzi Hangover Cures with Sweetwater Social’s Tim Cooper2014-10-072016-08-23https://thirstymag.com/wp-content/uploads/2016/04/thirsty-nyc-logo-1.pngthirsty.https://d2rf0detuhmti.cloudfront.net/wp-content/uploads/2014/10/tim-cooper-sweetwater-social-nyc.jpg200px200px
About
Tara Fougner
Co-Founder of thirsty, Tara Fougner has over over 15 years of industry experience and a passion for the global beverage community. One might think that Tara was destined for beverage media as her great-grandfather, G. Selmer Fougner, is credited by David Wondrich as being "America's First Drinks Writer." A lifelong New Yorker, you can usually find her hunkered down on some barstool around the world chatting up the bar crew about their beverage program and endlessly taking pictures of drinks for the 'gram. In 2020, Tara was honored by Drinks International on their 'Top 100 Most Influential In the World' List. 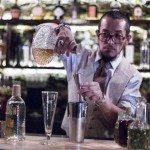 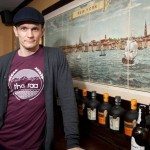