The collaborative pop-up provides New Yorkers an opportunity to experience one of the best bars in the world without having to travel to Puerto Rico, which everyone should totally do when it is safe. It also marks both Dante’s and La Factoría’s first pop-up since the onset of the pandemic – a celebration of the positive outlook on the future of the worldwide hospitality industry. This is serious IYKYK MAJOR for cocktail bar lovers around the world, so you will not want to miss this!

Additionally, a percentage of sales will be donated directly to PRCW Tip Jar , an emergency fund established to help support the local Puerto Rican hospitality industry impacted by the closures of bars and restaurants due to the COVID-19 pandemic. 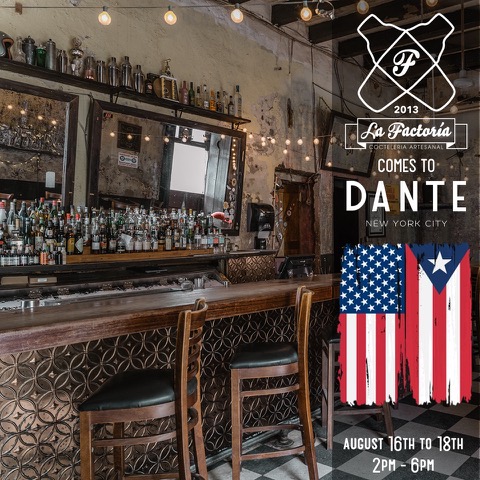 Of course, both Dante and La Factoría are known for their live music, so you know they had to deliver the Latin vibes. Cuban performer Chino Pons will play a variety of Latin (we are expecting some of our favorite Salsa classics) music for all three days of the pop-up, from 3:00 – 5:00 p.m. daily. The pop-up will take place at Dante (79-81 MacDougal St.). Reservations can be made via Resy, with walk-ins accepted but try to get there early.

Bacardi Dante la factoria pop-up bar puerto rico world's 50 Best
Dante Brings La Factoría From San Juan to New York City For A Three-Day Bar Pop-Up2021-08-132021-08-13https://thirstymag.com/wp-content/uploads/2016/04/thirsty-nyc-logo-1.pngthirsty.https://d2rf0detuhmti.cloudfront.net/wp-content/uploads/2021/08/post.jpeg200px200px
About
Tara Fougner
Co-Founder of thirsty, Tara Fougner has over over 15 years of industry experience and a passion for the global beverage community. One might think that Tara was destined for beverage media as her great-grandfather, G. Selmer Fougner, is credited by David Wondrich as being "America's First Drinks Writer." A lifelong New Yorker, you can usually find her hunkered down on some barstool around the world chatting up the bar crew about their beverage program and endlessly taking pictures of drinks for the 'gram. In 2020, Tara was honored by Drinks International on their 'Top 100 Most Influential In the World' List.

GupShup Brings a Splash of Color to NYC’s SummerFeatures