On December 15, 2010, The Cosmopolitan of Las Vegas swung open its doors to Sin City’s thrill-seeking public. The colossal resort marked the final emergence of the boom years Las Vegas had been in the midst of. It was the culmination of a $3.9 billion project, showcasing a multi-layered entertainment experience stuffed with casino floors, diverse eateries, and casual hangout spots. Just 11 years later, and despite Las Vegas’ crushing 2020 and 2021, The Cosmopolitan of Las Vegas appreciated in value, hitting $5.65 billion in the eyes of MGM Resorts International, with the selling Blackstone Group making a huge return on its $500 million investment to renovate the property. As reported by KTNV, despite the change in the showrunners, The Cosmopolitan is expected to maintain its uniqueness among its fellow venues on The Strip. So, what is it about this venue that’s made it such an endearing and increasingly valuable member of the Sin City skyline?

Very much a complete medley of entertainment

Boasting two highrise towers that exceed 600ft in height, The Cosmopolitan resort houses a 110,000sqft casino, triple that in restaurant and retail space, a 3,200-seat theater, and over 3,000 assorted hotel rooms. As you can see in this Huffpost piece, the scale and assortment of high-quality options earned The Cosmopolitan the distinction of the Best Hotel in the World by Gogobot. The extravagance and array of the resort is epitomized by the Chandelier Bar. With its Level 1, Level 1.5, and Level 2, it combines as an art exhibit, cocktail haven, and playground all in one while subtly keeping its themes distinct via the leveling system. The blending of themes within a collective that makes CN Traveler suggest that if you’re in Vegas, you’ll likely come here.

It’s a tried-and-trusted method of setup that mirrors the strategy of popular online casinos. Take the live casino Betway has to offer; it combines several themes and formats of multiple games. While they are separate entities in the live casino, their tiles all relay the same luxurious room and dealer mentality. The Chandelier Bar does the same with its idea of a bar mixing with casino entertainment. Looking at this one bar as a microcosm of the resort offers a sense of its range to those who are yet to visit. The restaurant scene is just as vibrant-yet-suited to the theme. We love the Ghost Donkey, with its agave-forward concept and salsa-heavy playlists. Yet even this Ignacio Jimenez venue isn’t out of place in the same resort as Spiegelworld’s first-ever restaurant, the psychedelic Superfrico.

What they say about The Cosmopolitan 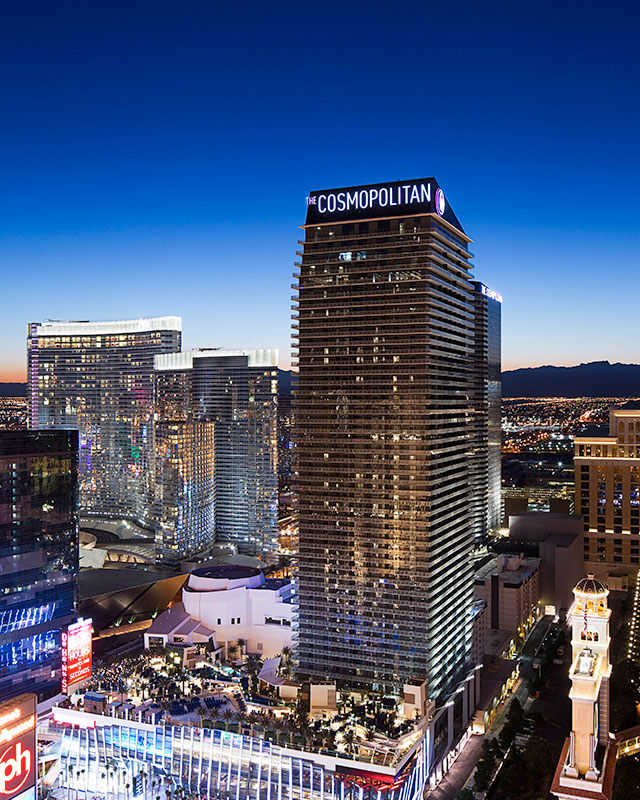 The most important aspect concerning the late-2021 news of The Cosmopolitan’s sale to MGM is that the intent is to maintain its status quo. While perhaps not the most objective source, we gained some great insights from the Chief Mixologist of The Cosmopolitan of Las Vegas, Mercer Boarini. For dinner and drinks, she says, The Cosmopolitan’s own Rose. Rabbit. Lie. is the place to be for its raucous, luxurious, and also the surprising setting of entertainment and ambiance. The novelty of the assortment of luxurious entertainment keeps The Cosmopolitan in high standing with the public and critics to this day.

As listed by the go-to site for the public’s opinion on travel destinations, Trip Advisor, the 4.5 out of 5 ‘Excellent’ score of The Cosmopolitan may only rank it 57th among Las Vegas hotels, but there’s so much more to it than the rooms. The dining experience is perfectly described as having a one-of-a-kind collection. The stylish design and art engage with the cultured, while the nightlife is vibrant and captivating. It’s all of this that won it one of the site’s 2021 Travellers’ Choice Best of the Best awards: this accolade is presented to the top one percent of businesses across select categories.

You’ll also find mounds of praise for The Cosmopolitan from professional critics as well. In the review The Telegraph ran, it won a nine-out-of-ten rating, hailing it as “one of the glitziest of the new breed of Vegas hotel resorts.” The casino is far more glamorous than many of its counterparts on The Strip, which is complemented by the high-end dining selection and a sprawling array of entertainment options. The travel guide Forbes runs goes as far to give The Cosmopolitan of Las Vegas its recommended seal of approval, labeling it as “Verified Luxury.” The chosen highlights include gambling in the packed casino to then relaxing in one of its three luxury pools, each of which is landscaped by seasonal flowers. It seems odd to think of betting on roulette and then hopping in a luxury pool surrounded by small gardens, but that’s the kind of novel luxury appeal the venue revels in.

The Cosmopolitan remains one of the hottest venues in Las Vegas, even if its name doesn’t ring out across the world as the likes of Caesars Palace or The Bellagio do. Its unique mix of luxury entertainment across different themes somehow blends very well, more than explaining its multi-billion valuation.