We love a bartender that is serious about cocktails and the craft but doesn’t take “it” all too seriously. After all, bar life should be about fun. Enter Anthony Bohlinger, the super talented fellow behind the bar at thirsty favorites Maison Premiere and Mulberry Project, who also is credited for the menu at new buzzed-about spot Boucherie.

Anthony first caught our eye when he was running the bar show at Chef’s Club by Food & Wine and we quickly realized his talent for not only tending bar but also working a crowd. So we recently pulled up a barstool with this Bushwick resident.

Thank you @gabiporter for the dope ???? #rematchbeeyatch can't wait for next year. #braap ????

What was your first gig in the industry?

I’ve hung out in bars in I was about 18 years old. When I was 15, I worked at Manhattan Bagel making bomb pork roll egg and cheeses, but my first bartending job was in Hoboken, NJ, at The Turtle Club, this was around 2009 I think. I. Was. Terrible. My first customer’s drink order was a Ketel and 7, so I poured Ketel One and a bottle of Seagrams 7 in a collins glass. The guy almost died. I knew nothing. Big ups to Cory for hiring bartenders and not training them.

What was your gateway drink that made you take bar life serious?

I was catapulted into opening a restaurant in South Beach after only a few months of bartending. I had no clue what I was doing. I thought I could make a decent old fashioned until I had one made by an actual bartender, then I realized I had to get my shit together.

Whiskey and a beer.

Daisy de Santiago, if that is considered a guilty pleasure, or maybe a frozen daiquiri.

My friends and I were little shitheads growing up. We would have sleepovers at my best friend, Rob’s house. He was Italian and his parents had a massive surplus of Galliano in their basement. I’m pretty sure that’s what first did me in.

Sorry, folks, I don’t drink either. When I wanna get some choice buds for cocktails, I go to Sun’s Organic Garden Tea Shop in Chinatown or Palais de Thés; they have truly wonderful tea.

Death row drink – what would be your last sip?

It would be cool to say something like a ’02 Screaming Eagle (Cabernet Sauvignon) or-or a Yamazaki 50yr, but if I’m going out, I’d probably take some Old Grand-Dad.

Who is the best drinking buddy for a night on the town?

Thomas Waugh, shout out to him, but I honestly have no clue where he is working right now.

Let’s hear some of your favorite NYC spots for a drink or three:

Post-Shift Drink – usually a Catskill pilsner while I close up at Maison Premiere. If I get out early enough, I’ll swing by Mo Money at the bodega and have a beer with him. I really don’t go out too often, plus everywhere I work I close, so it’s hard to get a post-shift drink at 5 am. So most post-shift drinks are bodega friendly.

One day in October, I looked up at our beer selection in the taproom and realized that half of our draft lines were lagers. A fairly exceptional array at that. Left to right: Ball Lightning Pilsner, Baby Pilsner, Oktoberfest and Nightshine Black Lager. A nice contrast of traditional styles to fairly imaginative versions. Lovely contrast in colors, too! #latergram #catskillbrewery #craftbeer #lager #pilsner #oktoberfest #schwartzbier #blacklager #beautiful

Where do you take out-of-towners for cocktails for an “Only in New York” experience?

What is your favorite spot for a romantic “let’s get it on” date night drink?

I had a date at ZZ’s Clam Bar once. It didn’t last.

Most under the radar impressive bar in NYC that deserves more attention?

Check out the homie Maxwell Britten at The Django at The Roxy Hotel. He’s putting together an amazing champagne menu.

When you've had a long day and some cool friends ask you if you're in the mood for a slice, you take a chance and see what happens. #millesimme #2008 #pierregimmonet #specialclub

Any drinks on your new Mulberry Project menu that you are really excited about?

I’m very happy with all the drinks there, it’s a pretty nutty place so I had an opportunity to be really playful. We have a fun cocktail with Absolut Elyx that utilizes Unicum Plum, a Hungarian plum Amaro, called “I’ll Run Away with You.” We make a tasty foam out of the Unicum with caramelized Asian pears. The cocktail has Elyx, Gran Classico, cardamom, apple juice, and the housemade foam. We serve it in a big ‘ole copper coupe which makes the presentation special. 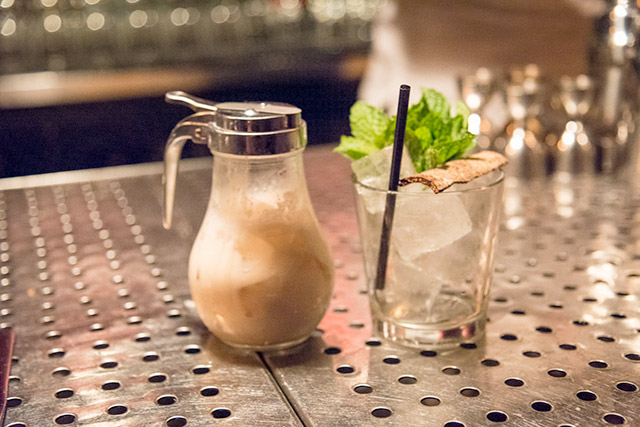 Probably a Newport Light and an Orange Crush. If I’m in Jersey, a Pork roll (Taylor ham) and egg on an everything bagel, no cheese.

A few favorite cocktails bars around the country that are a MUST to Big Up?

So many places! If you’re ever lucky enough to visit Aspen, Colorado, go to Jimmy’s. Trust me, that’s all you need there.

Go to a bar where they make shitty drinks then go to one that makes great drinks … find out the difference.

Listen, ask questions, be humble, and take your time. My chef taught me two great lessons that help me survive in this industry. 1) have the skin of a duck, just let shit slide right off you, and 2) and don’t put both feet in one shoe. ( Always have a contingency plan.)

Maison Premiere and Mulberry Project are my main focus. Then I’ll be in Aspen soon for the Après Ski Cocktail Classic, and I have a dope super secret project that will be unveiled next September, but for that, you’ll have to stay tuned.

Aspen, Daiquiri, Galliano, Interview
Tara Fougner
Tara has a deep passion for all things in the drinks world, but does not care for writing bios. One might think that Tara was destined for beverage media as her great-grandfather, G. Selmer Fougner, is credited by David Wondrich as being "America's First Drinks Writer." The self-proclaimed "biggest bar superfan" of the Thirsty crew, Tara became a founding Partner of Thirsty after working in the beverage & hospitality industry for over 15 years. A lifelong New Yorker, you can usually find her hunkered down on some barstool around the world chatting up the bartender about their menu and endlessly taking pictures of drinks for the 'gram.
Recommended Posts 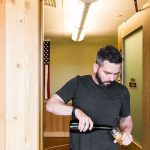 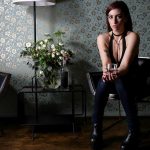