Secret Sake Bars & Milkshakes With The Up & Up’s Chaim Dauermann

Since the opening of craft cocktail bar The Up & Up on Macdougal Street earlier this year, head bartender Chaim Dauermann has been busy slinging drinks for thirsty patrons. With former stints at Hudson Bar & Books, ‘inoteca e liquor bar (alongside The Up&Up owner Matt Piacentini), Gin Palace and Desnuda, the Pasadena native has been studying cocktail culture for years and now can be found mixing up some of the best concoctions in town at the Greenwich Village bar. And while staying up on the latest trends in drinks takes up a lot of his time,  we caught up with Chaim to talk about his favorite places to drink, his hangover remedy, best date spots and much more.

Favorite NYC place to grab a drink when you’re not working?

If I’m drinking in Brooklyn, it’s almost always going to end up at Extra Fancy. And any other place I go to in Brooklyn is inevitably a stop on my way to Extra Fancy. In Manhattan, Holiday Cocktail Lounge, Donostia and The John Dory Oyster Bar are all typical haunts. But you want to know a secret? My all-time favorite place to hang out over a drink and get something to eat isn’t what you’d expect: It’s Sake Bar Hagi, on 49th Street. I’ve been going there since I first moved to the City ten years ago, before I really started going to cocktail bars. Before I even really started going to restaurants. It was what I wanted before I even knew what I wanted. And it still is.

What is your go to drink when you are out?

If I want a cocktail, but I’m not sure what I want, and I’m sitting in front of a bartender who I know can make a fine drink, it’s going to be a rum old fashioned. I will never tire of rum old fashioneds. If I don’t feel like having a cocktail, or I’m not in a cocktail bar, the go to drink is either Maker’s Mark and a crisp beer, or a gin and tonic.

I worked at the coffee cart on a college campus in my hometown of Pasadena, CA. Sometimes I’d work in the cafeteria instead. Either way, I got to eat as much as I wanted. Pretty much any time. For free. The cafeteria was fun because I got the widest selection of food. The coffee cart was fun because I worked there with one of my best friends and had almost no supervision. We just hung out and listened to Iron Maiden from open until close every day. I worked this job for two months and gained ten pounds. I walked away from it thinking that food service gigs were all about eating as much as you want and hanging with your friends. 15 years later, I still haven’t worked a single hospitality job where I’ve managed to eat very much, but I’ve made a lot of great friends.

A gem of a dive bar is nothing more or less than your reliable last stop of the night, where the later you show up the happier you are that you went, where the staff always remembers you but never lets on that they remember whatever you don’t remember from your last visit.

My first actual bar job was at The Comfort Diner on 23rd street. This was 10 years ago. It’s gone now. But my memories of high-volume milkshake service will always remain. I’d bet serious money that I’ve made more career milkshakes behind the stick then any of my other bartending friends.

What was your A-H-A moment, like when was there a moment when you realized that this was absolutely for you?

I met someone much younger, much less experienced, and much more well-known than I was, who had given up a lot to pursue a life behind the bar. I was on my third attempt at staying interested in college, while also managing a cocktail program and working 50 hours a week. I was acing my classes. But I suddenly realized I was better at finishing cocktail menus than I was at finishing short stories, standardized tests, semesters at school, job applications, household chores, or anything else in life. And I enjoyed it far more. And I realized the odds were good that no matter what avenue I pursued, I’d end up behind the bar again because I loved to be there. Sometimes you have to give up on your dreams to make way for new ones. I left school, quit the job I had and found a better one, and didn’t look back. Deciding to make this my life has been the most rewarding decision I’ve ever made.

Do you have a mentor, or someone that you look up to in the industry?

Matt Piacentini, owner of The Up & Up. Years ago he taught me everything I needed to know to turn a bartending job into a career. Now I’m working with him again and I’m still learning from him.

Coffee or Tea? Where do you go and how many times a week?

I drink coffee. I drink coffee every day. I drink a lot of it.  I drink it in the morning. I drink it in the afternoon. I drink it in the evening. In fact, I’m drinking it right now. When I’m at work at The Up & Up, I go to Third Rail. It’s right around the corner on Sullivan Street. The coffee is fantastic and the staff is friendly as all hell. When I’m at home in Crown Heights, I go to Tinto. I go to Tinto even if it’s out of my way. There isn’t better service at any coffee place anywhere. They consistently exceed my expectations and surprise me. They’ve done it from day 1. Single origin fair trade pour-over roasted mere days ago by hipsters is wonderful, but being treated like a human being is even more important.

However, when I want the absolute best gourmet caffeination experience, the best possible coffee, I find myself drawn to Box Kite, Abraço, and Everyman Espresso.

Yes, I drink a lot of coffee.

A big plate of raw oysters backed by something low proof. Usually some beer or sparkling wine.

What are you into right now when it comes to cocktails?

I like seeing and serving cocktails presented in unexpected ways and/or in unexpected places. A few weeks ago I went to see Jen Marshall at Butter & Scotch. She gave me a Blood & Sand jell-o shot in the shape of an orange slice, served inside the rind. And she sent me home with a slice of Ramos Gin Fizz pie. That sort of thing is really magical for me.

When you are creating cocktails do you think of the liquor you want to use first or the taste that you are going for? What is your process?

For me, cocktail creation usually comes from one of two places. 1.) I have a specific flavor I’d like to achieve and then I work to find the ingredients that best present that flavor. 2)  I imagine a flavor combination that strikes me as being interesting or having potential, and then if the mixture works out well in real life, I build a cocktail around it.

What is your favorite spot when you want to be low-key or date?

When I want to be low-key and still be surrounded by wonderful food and drink, I am often drawn to Cocotte, in SoHo. It’s a Basque small plates restaurant, and everything about it is perfect. And for some reason, none of my friends seem to know about it. Maybe they will now.

Hidden bar gem? Go to The Jeffrey on the Upper East Side, and sit at Jacob Tschetter’s cocktail bar. Prepare to be blown away. It would be clichéd to say it’s like being in a downtown bar uptown. It’s more like visiting Willy Wonka at his chocolate factory, only instead of chocolate there’s booze, and instead of being weird and creepy, Willy Wonka is young, spry, bearded, and loves bluegrass. And also likes to get weird.

Hidden dive bar gems? I often don’t know how to respond to questions like this. I know what people are looking for: A dusty, unkempt bar with cheap beer and an ugly bathroom. But what is a dive bar, really? A gem of a dive bar is nothing more or less than your reliable last stop of the night, where the later you show up the happier you are that you went, where the staff always remembers you but never lets on that they remember whatever you don’t remember from your last visit. The dive bar is the ultimate keeper of secrets. When people ask me for my favorite dive bar in NYC, I often crack a wry smile and say Employees Only. I’m joking, but also not joking. What cheese puffs are to some, steak tartar is to others. Some dive bars have cheese puffs. Some have steak tartar. But Employees Only is ahead of the pack, because they also have chicken soup for you if you are doing it right.

There is actually one more “hidden gem” bar that I’d really like to mention before we move on from this topic. I would like to scream this from the mountaintops: Go to Sycamore Bar & Flower Shop in Ditmas Park. Go. Go. Go. This bar is a perfect example of why so many “Best Bars In America” lists are questionable at best. Where are the sports bars? Where are the wine bars? And where are the weird but awesome bars that are flower shops by day and kickass whiskey bars by night? I’ll tell you where to find the last one: Sycamore, in Ditmas Park. It’s great. You’ll thank me later.

That I’ve taken my time.

Anything else that you would like to tell us, what is next for The Up & Up?

One of my big areas of interest is cocktail education. Not just for people in the industry, but for patrons as well. There are plans to incorporate education opportunities into our offerings at The Up & Up. I can’t give you specifics, or a timeline. All I can say is that it’s coming.

The Up & Up’s Details 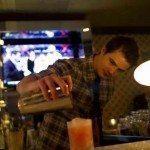 Micheladas, Gin and Nachos with Lazy Point’s Jeremy StrawnDrinking With 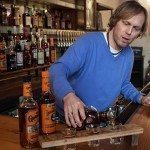