Green Juice Cocktails, Downtown Martinis – and Why Vegas and Miami Own Nightlife: Drinking With David Rabin

Anyone who knows anything about the NYC nightlife scene has been to one of David Rabin’s spots. He co-founded OG Meatpacking hotspot Lotus and then opened equally hip Double Seven directly across the street (gangster). And while those spots have come and gone, Rabin is still a major force in the industry as a partner at The Lambs Club, Skylark, JIMMY at The James hotels in New York and Chicago, and The Dorsey a new spot at The Venetian Hotel in Las Vegas, with cocktails by Sam Ross from Attaboy.

He’s also behind the health-conscious West Village eatery, Cafe Clover – which has the most delicious Cauliflower Steak – with plans to expand on that concept. But more on that later.

How did you get started in the biz?  What was your first hospitality job?

A close friend of mine from college was a derivatives trader on Wall St., and I was a lawyer. We were both pretty unhappy in our jobs and would be out at parties and events around NY. Then we realized we knew a really diverse and broad group of people in music, fashion, sports, and entertainment. We kind of had an “F it” moment at age 28 and decided to open our own place with the idea that if we failed miserably we’d go back and get “real” jobs.  We opened a nightclub and restaurant called Rex, and, while it didn’t make us a lot of money, it put us on the map in a big way and led to many other opportunities.

I’m not a huge drinker, to be honest. So, when not drinking a Diet Coke, my two faves are probably a Gold Rush and a cocktail that we have at Cafe Clover called The Garden Cocktail, which has a green juice base and is a delicious (and way too easy) to consume alcohol.

Do you drink coffee or tea? How do you drink it and how many times a day/week? Any favorite local spots to get it?

I’ll have both sometimes at The Lambs Club, our spot at which I’m at during the late morning/early afternoon.  We have a great tea collection.  When I’m down at Cafe Clover, I have Matcha.  And, as I head to the subway after meetings at The Skylark, I’ll grab an espresso at Cafe Grumpy– great stuff there.

What are your favorite bars in NYC?

Some of the uptown spots are incredibly great: The King Cole Bar or Bemelman’s Bar, for example.

Hidden gem/hole in the wall

Not sure if it’s hidden, but, I have great affection for Attaboy, with which Sam Ross has done a great job. I loved it as Milk and Honey in the Sasha [Petraske] days.

A martini at The Odeon is about as cool a spot as you can find.

Where do you take out-of-towners for cocktails for an “Only in NYC” experience?

Well, here’s the shameless, but I think justifiable, plug: our spots, The Skylark and JIMMY at the James, have some of the best views in all of NYC, plus great music and amazing cocktails by Johnny Swet. Both places pretty much blow people away because the views are insane, but we also put great emphasis on the cocktails and service.

It was much more organic. Word just got “out”, not via a PR plan or a campaign, but just because a spot was cool.  I also think that nightlife is so spread out all over Manhattan and Brooklyn now. It would be hard to say that on any given night you could just roll to one spot and know you were going to run into 20 or 30 people you knew and wanted to see. We had that at Lotus and even with the first iteration of The Double Seven. I think Acme had that for a bit, and maybe now one of Paul Sevigny’s spots might feel that way or The Blond.

I did enjoy the days when you could be at dinner and just cab it over to a place knowing you’d find a warm welcome with a bunch of friends.  I think the impact of all the festivals and 5-day events around the country have dampened the enthusiasm for nightlife while in NY. People are doing yoga at 7 am.

What drew you to Vegas to open your latest venue there? How is that scene different from NYC?

I have a real affection for The Venetian. I worked with them on a project back in 2000 and have stayed in close contact with Rob Goldstein, who is now President and COO of Sands Corp. He’s a great guy and asked me to work on re-doing their bar program about 2 years ago.  I jumped at the chance, because I love working with Rob, and the executive team was really committed to doing something different.

Rob, Patrick Dumont and Patrick Lang recognized that the hotel needed a new statement venue, and we set about to create what became The Dorsey, with cocktails by Sam Ross, design by Thomas Schlesser/Design Bureaux and a highly curated music program that focuses on what I call “head-bopping” music — music that hits you in your soul but is not played so loudly that you can’t have a conversation.

A post shared by The Venetian Las Vegas (@venetianvegas)

Vegas, and I’d say Miami Beach, probably have the most vibrant nightlife scenes right now in the US. There’s big money spent on big DJs and clubs that hold more people than live in some small towns. We endeavored to hit what we think is a neglected niche – nightlife for grown-ups – where friends or couples, who’ve had a nice dinner but aren’t ready for bed, can go and hear some great music, have a best-in-class cocktail and feel a little vibe without being in a mega-club, unable to hear themselves talk.

Special shout to any bartenders or drinks makers out there that you do your best to visit and you think deserve some special love?

Well, I think AJ (Ojeda-Pons), our somm at The Lambs Club, is one of the best in the biz, plus he’s probably the snappiest dresser in Manhattan. I’m also lucky to work so often with Johnny Swet, (he did our list at The Skylark and other spots) because he’s so creative, so responsive and diligent. He’s a guy you never have to worry about. He just gets things done and beautifully so.

Spill it… what are you working on right now?

We’re about 3 weeks away from opening a grocery and PDR space called Clover Grocery (www.clovergrocery.com), and we’re in the running for some more rooftop projects – one in The Nomad area and one in Brooklyn – both of which we really hope to secure. I’m also working with a great group of friends on an Indian spot that aspires to be the Pastis or The Odeon of Indian food in NYC. Lastly, it looks like I’ll be working with Kyle, one of my partners, on a hotel project in Philadelphia.  And I am, of course, hoping to do more work in Vegas – gives me a good excuse to play a little poker.

Social call – where can Thirsty readers keep up with you on social media?

I’m on Facebook.  I’ve been avoiding IG for years because I already stare at my phone WAY too much, but I think I’m about to start an account. It’s a shame, because I’ve been at some incredible events this year that I haven’t really documented. 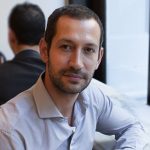 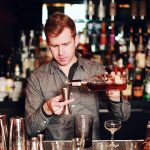 Chardonnay Spritzers, The Aviation and Mall Cop: Drinking with Alex DayDrinking With