Every now & then, you see an interesting person from across the room and ask yourself, “who is that?”  That is exactly how I felt when I first met Ms. Franky Marshall. A true hospitality vet, Franky was part of the opening staff at legendary cocktail bars, Clover Club and The Dead Rabbit.  She has also been behind the stick at Monkey Bar and The Tippler and has a resume of accolades and hardcore cred.  She is the former Vice President of the USBG of New York, was named one of the “Top 10 Female Mixologists” by The Drinks Business Magazine, has been a Presenter/Moderator at Tales of the Cocktail, The Prague Bar Show, Portland Cocktail Week, and Golden State of Cocktails. She became a BNIC Certified Cognac Educator in 2014, is a graduate of Bar Smarts, and holds a Certificate with Distinction from the Wine and Spirits Education Trust.  Although she is clearly extremely talented with shaking & stirring drinks, it is her confident signature style and genuinely warm aura that makes Franky truly memorable. There is just something about her energy that makes you want to get to know her … with that being said, let’s get to know her better and go drinking with Ms. Franky Marshall.

I need a spot where I can get a healthy pour of good wine in a clean glass.

Favorite NYC place to hang out for a drink or two?

You know, I’m not really one to ‘hang out’ or be a regular at bars. I prefer to try places that are new and/or “noteworthy” and see what they’re up to. I find places that are inviting, that have atmosphere and character most appealing. Other than that, I need a spot where I can get a healthy pour of good wine in a clean glass.

What I drink depends on where I am. I’ll order according to what I think is going to be best at the establishment I’m in. That said, wine and champagne are my session drinks, sherry… But I’ll only order those in certain bars. If end up in a random place with a limited selection, whisky neat can be a safe choice.

My first service industry job was serving food to residents of a retirement home. It was a very challenging, eye opening, stressful experience for a teenager. The residents were very demanding, had extremely specific ways they liked their food served for various meals, and were quite vocal about it, to say the least. In fact, they would just yell at you if you did something differently than the way they were used to.

Between that and working as a server in Chelsea – which interestingly, had a lot in common with the home – it provided great training in how to deal with the high-maintenance and needy. After those two jobs, I was ready for anyone and anything. 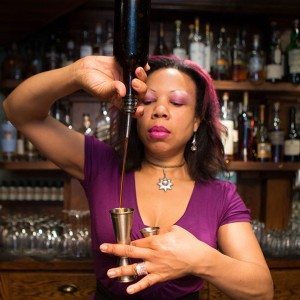 First boozy drink you ever had?

The first alcoholic drink I ever had was most likely Jamaican rum – probably Wray & Nephew Overproof. My family is from Jamaica, and we always had rum around (and scotch), and I remember my mom telling me she used to give me a teaspoon of the stuff every now and then in the crib because I never slept at night. After that, I hardly drank all though high school and college!

Right now, I’d love to be working with and learning more about kitchen equipment that could be useful for the bar. I miss working in restaurants and having access to the toys that chefs use on a daily basis.

Both! I like coffee with pastries for breakfast (which, if I have breakfast at all, is normally sometime in the late afternoon) or sometimes with dessert after a meal. I’m a decaf drinker, so I don’t drink coffee for the boost, rather for the taste, so it’s gotta be a good cup or I’ll just skip it altogether. I really like Blue Bottle on West 15th.

Tea is a savior anytime of day, and I love it because it’s so versatile. I actually have 23 different varieties at home right now. When I travel, it’s BYOB (bring your own bag), so I always have the tea I want available when I need it. “Buccaneer” by Serendipitea is one of my favorite black teas.

Coffee gets a splash of half and half, and black teas get a drop of milk – too much masks the flavors. Never any sugar in either.

Since hangovers usually render me horizontal and wishing the world were a better place, my “remedy” involves many hours of sleep, followed by starchy foods and lots of water. I definitely don’t subscribe to the “hair of the dog” philosophy.

I drink (or don’t drink), guilt free, depending on my moods. I try to make sure that anything I put in my mouth belongs there.

Where do you like to drink when you’re traveling and who are industry favorites who have delivered memorable experiences?

I don’t have a “favorite” – there’s so many good people out there. A few great experiences I’ve had while traveling over the last year or so:

Best spot eats when you are drinking or dare we say, drunk?

For late night sustenance, I like Coppelia, the “24/7 Latin Diner” on 14th St. The Lomo Saltado and empanadas are tasty and satisfying.

When it’s late and nothing else is around, it’s off to the deli for a grilled salsalito turkey (no preservatives!) With peppers, onions, lettuce and tomato, melted cheddar on a toasted sesame seed bagel – hold the mayo.

I haven’t been on a date in a helluva long time! However… I recently had dinner at Via Carota in the West Village. The food and service were very good, it has a cozy atmosphere and importantly – good lighting!

I think the Metropolitan Museum is a good date spot as well. Maybe not for a first date, but from, say – the 4th onwards. There are lots of nooks to get lost in, the roof has a great view, and just being surrounded by all of those inspirational and beautiful works can restore your faith in humanity. (Temporarily anyway.) Also, it’s always good to get to know a potential partner’s aesthetic early on, before it comes time to decorate the apartment.

I’m proud that I’ve remained adaptable, open to learning new things, and I’m not afraid of change. I like to take risks and if sometimes things don’t work out, I’ll choose another path. I don’t always take the easy road.

I’ve been fortunate enough to have many people give me advice and offer help over the years. Folks have (mostly) been kind. I’m grateful that Julie Reiner and Susan Fedroff hired me at Clover Club when it first opened. I’d had years of prior bartending experience, although not “cocktail bartending”, really wanted to get involved in the cocktail world, but didn’t know anybody. I started as a server, then moved onto the bar within about 8 months. I learned so much working there. I was introduced to industry luminaries, and was given some fantastic opportunities that I didn’t even know existed at the time. That was the beginning of my journey into this rarefied cocktail world.

If you weren’t part of this crazy booze world, what would you be doing?

I studied vocal music, so i’d probably still be singing. Of course, i will always be a singer, it’s just a matter of getting back on stage and trying to make some kind of living at it again. Music is not easy career choice, that’s for sure. Either that, or I’d still be in school just taking classes for the hell of it.

I wrote an article for The Diageo Bar Academy on things to consider when looking for a new bartending job. It was my first official writing gig, so that was exciting.

Other than that, I’m just working on me.

clover club Drinking With mixologist the dead rabbit
Drinking with Ms. Franky: Jamaican Rum, Egg Hating & 20 Languages2015-03-052016-08-23https://thirstymag.com/wp-content/uploads/2016/04/thirsty-nyc-logo-1.pngthirsty.https://thirstymag.com/wp-content/uploads/2015/03/ms-franky-marshall-drinking-with.jpg200px200px
About
Tara Fougner
Co-Founder of thirsty, Tara Fougner has over over 15 years of industry experience and a passion for the global beverage community. One might think that Tara was destined for beverage media as her great-grandfather, G. Selmer Fougner, is credited by David Wondrich as being "America's First Drinks Writer." A lifelong New Yorker, you can usually find her hunkered down on some barstool around the world chatting up the bar crew about their beverage program and endlessly taking pictures of drinks for the 'gram. In 2020, Tara was honored by Drinks International on their 'Top 100 Most Influential In the World' List. 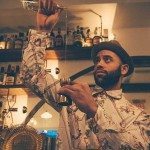 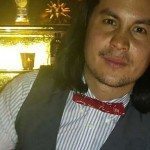