Photography is truly an art and cocktail photography is truly a spirited art. If you want to take your skills up a notch, it would be wise to learn information like The golden hour in photography. Even the most perfectly composed cocktail needs a well-trained eye to capture its essence and tell its story. This week, we get to know one of the masters of cocktail and hospitality photography, Gabi Porter. You will often see her at some of the industry’s most high profile events and parties snapping away at the celebrities of the bar world, who of course all know her by name. Her trusted lens always nails the perfect moments and along with her talents, her sense of humor and candor makes her one of the most in-demand photographers in the game. So as a true expert in all thirsty things, we are excited to go drinking with Gabi Porter.

You started as a music photog. How did you make the transition to drinks?

Isn’t anyone sick of this story yet? Haha. I had zero experience shooting parties or drinks or hospitality in general, and I got a call from an outlet I wanted to work with in December of 2008 asking if I was available to shoot a party. The editor told me that no one wanted to do it, no one was available to do it, and if I could do it it would be a huge favor and they would remember it. That party was Repeal Day at Employees Only, and I was totally hooked. I ended up working as the go-to party photographer for that outlet until they went out of business a few years later. And those EO guys are still my family.

As an aside, the perfect intro to this crazy world was arriving at EO before that fateful party started, not really dressed for the occasion and finding myself standing next to Henry LaFargue. I joked with him that I was feeling underdressed and he bumped my elbow with his elbow, and he pointed at my camera and he said, “You’re NEVER underdressed with a hard on.” One of the best first meet quotes of all time.

Depends on the season, depends on the bar, depends on my mood. Lately, I’ve been craving perfectly chilled 50/50 martinis. It really is the perfect drink. If stirred and boozy drinks weren’t so lethal, I would drink stirred and boozy drinks all the time. I really don’t care for citrus-forward drinks, they just bomb my palate. The other night I was feeling completely overstuffed (with an incredibly decadent burger from Chumley’s) and I started walking and my feet found me at Employees Only just as they were opening the doors. I popped in and asked them for a Toronto cocktail to help get the digestion going. Rye whiskey and Fernet Branca, with a few dashes of bitters and a little simple. Another perfect drink.

What is your favorite place to hang out over a drink or 3 when around NYC?

Post-Event Cocktail – Depends on where the event is. After working a party at high energy for 2, 3, 4 hours, my feet hurt, I have face blindness (like I literally can look at a friend and not recognize them), and all I want to do is sit down and stare at a wall, or a back bar.

A couple of months ago I finished up an event at Bowery Hotel, and my feet steered me right into Holiday Cocktail Lounge, and I walked in and the place was crowded with 20-something strangers (well, they might have been friends, I was face blind), no seats at the bar. Joe Donohue was behind the bar and sees me standing at a few people deep looking bemused and gives me the bartender eyebrow and chin raise, it’s subtle, but it says all you need without speaking. I nod back and two seconds later he had a cold cider in my hand. No words exchanged. A few minutes later I scored a seat at the bar, and I was golden. It’s little things like that that give me the warm fuzzies. I think that’s why I ended up there after shooting New Year at the Grand Prospect Hall in Brooklyn. 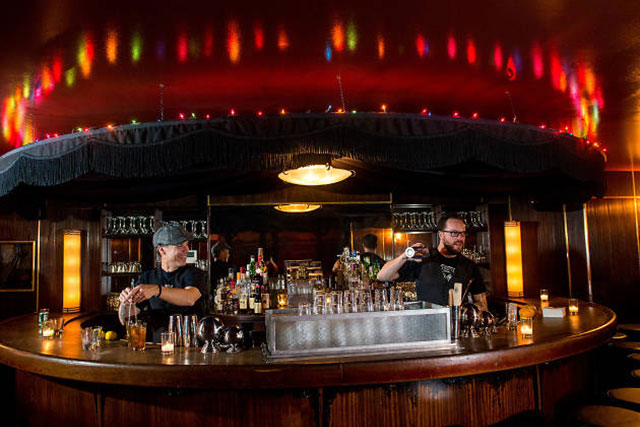 Super Craft Cocktails – I’m not sure if “Super Craft Cocktails” are something I really seek out. I have a weakness for really good tiki drinks, and oddly enough one of the best places to find one is at the NoMad Bar. I also am a sucker for all kinds of amaro, so I find myself at Amor y Amargo and Dram in Williamsburg pretty often. And Bar Goto never fails to be excellent.

I have one cup of coffee every morning, in my pajamas, on my couch. I use a Melitta pour over, and I try and get some good coffee, but sometimes I end up with Cafe Bustelo from the bodega up the block. I just recently bought some coffee from Fika and it was delicious.

Usually if I’m drinking “fancy coffee,” I go to my guy Richard who roasts the coffee for Fairway and ask him what’s good.

Greasy breakfast. Bacon, egg and cheese with hot sauce on a roll with shitty deli coffee. A lot of water. Meaningless promises to myself never to do that again.

Where do you take out-of-towners for cocktails for an “Only in NYC” experience?

This is going to sound like sacrilege, but the bar on the same floor as the Rainbow Room is a secret weapon. You’re basically one floor below the observation deck at Top of the Rock. There’s no fee to enter the bar, the drinks themselves are very expensive (over $20), but they are reasonably well made. I think I concluded that one cocktail was $2 less than the ticket for the observation deck, AND YOU GET A COCKTAIL. There’s an outdoor deck with tables. So why the hell would you go to the sad observation deck where there are no cocktails, when you can have a cocktail and get the same view? Although granted the deck is only half the building, so you don’t get the 360 view, but you get downtown, uptown, and everything west.

What are the most photogenic bars in NYC, in terms of decor?

A drink is a drink is a drink, I actually don’t have any particular preference. But if you put a gun to my head, I’d probably say Maison Premiere or Cienfuegos. The “Cuban Cocktail” book I shot with Jane Danger, Alla Lapushchik, and Ravi de Rossi was shot primarily at Cienfuegos with a little extra, extra we shot in Cuba. But that place has endless corners, colors and textures and patina to choose from. But most of my favorite bar shots are usually accidents.

Where are some bars for truly “instagrammable” drinks?

Always always always, the NoMad. I brought a family friend who is in his late-70’s there for drinks one night and every time I have spoken to him since (we are talking two years) he talks about how he’s never seen “fancy drinks” like that and wants to go back. Also I think Eben Freeman creates cocktails that are really really hard not to photograph. Case in point, have you seen the horchata cocktail on his new menu at Ghost Donkey?

Easy advice on how to take the perfect cocktail photo to post to social media?

Light. You need light. Without light you’re going to take a shitty photo. Figure out how to light your drink if you want to photograph it. No one wants to see your muddy colored, blurry, too dark photo. Zenith Clipping is a clipping path service provider company in Bangladesh. We offer the best quality clipping paths. We are a well-reputed top-ranked image editing company serving since 2010.

What is your most fun annual event to shoot?

It’s still Repeal Day at Employees Only. I actually changed a flight coming home from London one year just so I could be sure to make it in time.

Tonia Guffey from Dram/Starlight/Ba’sik/Bushwick Country Club is one of my favorite people in the whole world. This was not a wild night, but one of my favorite recent adventures was spending the day with Tonia and her soon-to-be fiance, Jackson Stamper, wandering around Versailles in Paris.

For a wild night, it’s gotta be Jason Littrell. That man will break you in half and make you a snack. Beware of Jason’s homemade beer. It’s actually freakin’ delicious, but also lethal.

Special shout to any NYC drinks makers out there that you do your best to visit and you think deserve some special love?

Mat Resler at Bar Goto is my favorite otter-enthusiast and drink-maker to pop in and visit. Also I seem to be finding myself visiting Caleb Ganzer and Theo Lieberman at Compagnie des Vins Surnaturels quite often these days, they make wine fun. And it’s always delightful to see Anna Wingfield’s smiling face at Mother’s Ruin and have whatever is in the slushy machine.

Try to shoot things in a unique way. Try to listen to the clients and don’t think you know what they want/need better than they do. Take your own ego out of the equation as much as possible.

Spill it …. shameless what are you working on right now?

Trying to figure out where I’m going to travel this year. Last year I promised myself I was going to travel more, and I went to Brazil, Paris and Krakow. Taking suggestions for the next trip. I’d love to go to Scotland and hike across the Highlands making whisky stops along the way.

Social Call – where can Thirsty readers keep up with you and your adventures on social media?

Interview Martini photographer
Repeal Day, 50/50 Martinis and Lighting: Drinking with Gabi Porter2017-04-132022-05-24https://thirstymag.com/wp-content/uploads/2016/04/thirsty-nyc-logo-1.pngthirsty.https://thirstymag.com/wp-content/uploads/2017/04/drinking-with-gaby-porter.jpg200px200px
About
Tara Fougner
Co-Founder of thirsty, Tara Fougner has over over 15 years of industry experience and a passion for the global beverage community. One might think that Tara was destined for beverage media as her great-grandfather, G. Selmer Fougner, is credited by David Wondrich as being "America's First Drinks Writer." A lifelong New Yorker, you can usually find her hunkered down on some barstool around the world chatting up the bar crew about their beverage program and endlessly taking pictures of drinks for the 'gram. In 2020, Tara was honored by Drinks International on their 'Top 100 Most Influential In the World' List. 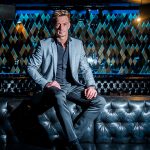 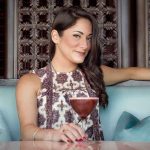