This week we sit down TJ Lynch of Mother’s Ruin in Nolita where they have a different featured cocktail menu each day and they have a kitchen that stays open late and serves good food. Lynch also said that when they opened they decided that they would change out the slushies on a daily basis, not repeating the recipe.

“He taught me about ‘bar maintenance’, which was his term for maintaining full water glasses, a clean bar and happy customers. He taught me how to respect the job.” – TJ Lynch

Lynch and Richard Knapp recently made the decision to launch an everyday brunch at Mother’s Ruin. “We’ve always been too small to fit the regular brunch crowds on the weekends,” explains Lynch. “And we’ve always wanted to offer our restaurant industry friends a brunch option on their days off.”

Favorite NYC place to hang out for a drink or two?

Lucy’s on Ave A (only when Lucy is working though)

Whiskey rocks. For the most part, you can get a palatable version anywhere. Your only real worries would be a dirty glass or bugs, so all in all, a safe choice.

Ok, well if it has to be booze related, that would be Baltimore Country Club, where I learned how to make some legendarily bad drinks. The room was full of rich, waspy blue hairs loved to order me around by snapping so rapidly I thought they would break their aging, over-privileged fingers. One of the cocktail highlights from this mecca of quality beverages was the Scotch Mist, which was basically just scotch over shaved ice that in mere single digit minutes would turn into a lukewarm watery Scotch soup.

An epically bad old fashioned was another staple. Lye soaked ‘cherries’, smashed mercilessly with a bucket of sugar and oranges that had been sliced and jammed into a Stor-n-Pour then carelessly aged in the back of the reach in cooler until an wonderful slime formed them into a solid block. Then the whole mess topped with four plus ounces of whisky, some ice and if it was in stock, a splash of bitters, yum.

Round that list out with a Planter’s Punch loaded with all varieties of canned syrupy juices topped with whisper of dark rum and you’re about there.

First boozy drink you ever had/first time getting drunk?

I used to make my parents gin & tonics when I was about 11-12 years old, and I would sneak sips a.k.a. “quality control.” That didn’t end well.

The cross-bottle pour is a lot of fun, we are messing around with basing cocktails around it. Be on the lookout, it’s coming!

Tea in the morning, coffee in the afternoon. Evidently, I’m like 83 years old and am really caffeine sensitive, so I have to watch the coffee intake. If I go too crazy with it, my heart tries to jump out of my chest and I ramble like a moron.

Beer and wings. In addition to being a great hangover solution, it’s also really good for keeping in shape.

Yup. Red wine and coke, the kalimotxo. It is usually at it’s best with crappy wine and served in a plastic cup.

Best eats when you are drinking or, dare we say, drunk?

I’ve been in an unhealthy relationship with buffalo wings for a few years now. It’s borderline psychosis. Occasionally, I’ll cheat on them with nachos.

Angel’s Share. It’s a nice, quiet experience. They do such a great job, and they don’t fucking blast it all over social media. It’s refreshing.

Xixa, Stillwater (good cheap wings!), and I love the two end bar seats at Frank in the East Village, especially when the windows are open. I’m sure there are a bunch of new gems out there but I’m really lazy.

We are proud that our staff consistently makes good money and enjoys their jobs. That drives us more than what cocktails we are currently making or some other insignificant crap that people get caught up in. We want everyone to have fun at work and still be able to enjoy their free time to the fullest. This city can be rough on the wallet, so we make a lot of decisions at Mother’s that focus on maximizing everyone’s income. Between adjusting the schedule, pricing, flow of service and some other key tweaks, we really try to make sure everyone is making enough dough.

My first mentor was a guy by the name of Hilary Hogarty (that’s not a typo). He was a 45 year old bartender in a time and place where no one over the age of 25 considered bartending a viable option. Not surprisingly, he was 7 years sober when I met him, as I heard many stories about how legendary his drinking antics were. In Baltimore at that time, people really looked down on anyone that bartended as a profession, it wasn’t a ‘real job’ in most people’s eyes, and they were pretty quick to let you know.

But Hilary knew every joke, remembered everyone’s name immediately and wore a pressed shirt, tie and apron every day, even though it was only required to wear black t-shirt as the uniform. He taught me about ‘bar maintenance’, which was his term for maintaining full water glasses, a clean bar and happy customers. He taught me how to respect the job.

He was the first person I had ever seen take the job of being a bartender seriously, or “running the stick” as he called it. Hilary established respect from customers and employees alike in a situation where no one else could. His reverence for the job sticks with me every day.

I’ve also learned a ton from Toby Maloney (The Violet Hour in Chicago). Not only does he have the high end side of it covered (James Beard Award, anyone?), but he has a ton of practical knowledge that I really appreciate.

I’ve never actually met Jeffrey Morganthaler, but I think he’s my spirit animal. His absolute dedication to a no-bullshit style of bartending (and behaving in general), is really admirable and all too rare in this business.

Talking about how awesome I am makes me uncomfortable.

We are working on a space in the East Village, slated to open this summer. It’s gonna be killer! That’s all I can say at this point!

kalimotxo Lucy's Mother's Ruin TJ Lynch
Scotch Mists & Buffalo Wings: Drinking With TJ Lynch2016-04-282016-12-15https://thirstymag.com/wp-content/uploads/2016/04/thirsty-nyc-logo-1.pngthirsty.https://d2rf0detuhmti.cloudfront.net/wp-content/uploads/2016/03/TJ-Lynch-Mothers-Ruin.jpg200px200px
About
Jessie Gibson
I am one of the co-founders of Thirsty. I shoot photos of cocktails and video. You can learn more about me at Jessie Gibson or connect with me on Instagram: @JessieGibson. 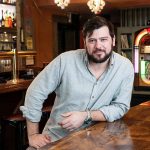 Espresso, Netflix and Wilderness Survival with Josh MazzaDrinking With 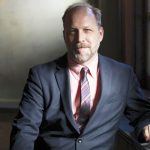