We caught up with Dustin Olson, the Beverage Director at Bushwick’s Forrest Point, and the host of this Sunday’s Industry Night at The Gilroy. Check it out.

Favorite NYC place to hang out over a drink? Where can we find you drinking when you are not behind the stick?

There’s a pub in the East Village called O’Hanlon’s. From time to time, I’ll go in on a slow night in the winter with my friend, Josh. They play any hockey game we ask for. We drink Miller High Life. We play Golden Tee. It’s glorious. I’ve also never had a bad time at The Wayland. People are great. Food’s great. Drinks are always great.

Dishwasher at a pizza joint when I was sixteen. Worked there for a year before being unceremoniously dismissed. Definitely deserved.

First alcoholic drink you ever had? What were you drinking the first time you got drunk?

Split a can of Coors Light with a friend before a dance in high school (it was a tall boy, for what it’s worth). First time I remember getting drunk was after mixing a 375ml bottle of Bacardi with every kind of sugary drink I could find, all of which was violently expelled onto the nice carpet at my friend Lucas’s house. Fortunately, we got it cleaned up before his parents got back in town. Please don’t tell them.

Is there a drink / Product / Ingredients that you just can’t stomach or don’t get? Why?

I once had a customer order Johnnie Walker Blue…up…shaken. I must have made him repeat it three times. His name was Gary and he said he called it a G-tini. It was no joke because he ordered four more throughout the night. It made absolutely no sense, but he was a really nice guy, had a great time, and tipped really well. There’s a lot of other G-tinis out there, but I’m a bartender, not a judge.

Coffee or Tea?  Fave Cup from where? How do you take it? How many a day?

Ninth Street Espresso (the one on 10th, obviously). Drip coffee with half & half and sugar. If I’m enjoying it whilst in Rob’s chair at the Blind Barber next door, I’d be hard-pressed to complain about anything.

If I have stuff to do, it’s exercise. If not, beer and Clamato

Who is your favorite bartender/Mixologist/sommelier/ service industry person? Why?

I don’t get there often, but when I want to learn something, I go to Amor y Amargo – initiatives like the Double Buzz are pretty much the reason I moved to New York. Everything Derek Brown is doing at Underdog is also worthy of mention. Lastly, if you visit Danny and Eric at Extra Fancyon Sunday nights and don’t have a good time, there’s probably something wrong with you.

Best pairing meal you ever had & where?

I finagled my way into a suckling pig dinner at The Breslin recently. Naren Young was at the table and chose the wine. I’ll stop there.

Where is your favorite spot for super chill night out or date night?

The Dear Irving/Raine’s Law Room folks do this better than anyone, in my opinion. Flatiron Room gets a nod as well.

I’d be remiss if I didn’t use this opportunity to give a shout out to our (L train) neighbors in Bushwick. Montana’s (Jefferson stop) and Featherweight (Montrose stop) are both doing great things. Proud to join them out here.

I was slinging beer and chicken wings at a sports bar when the Ward III boys took a chance on me. I started on Sundays and Tuesdays and climbed the ranks to Bar Manager by the end of the year. I knew what I’d been given and was hell bent on earning it. I think I did.

Do you have a mentor or someone you look up to in the industry? Who can we than for your delicious work?

Mikey Diehl taught me rum. Michael Neff and Kenneth McCoy taught me whiskey. Vince Favella taught me speed. Derek Brown taught me punch. Worth pointing out that my use of ‘taught’ doesn’t imply that I am done learning or that any of these folks don’t remind me every day that I have a lot farther to go.

What are you working on these days?

Rolling out new items for the fall at Forrest Point. Also been trying to wrap my head around poitin, now that I have two cases of it. Finally, getting ready to head back north to Calgary for a few months to work on a new bar called Cannibale, slated to open in the new year. Should probably get around to telling my parents I’m staying with them. 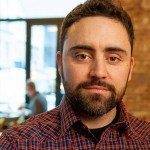 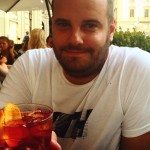 Negronis, Drinking at Age 2 (Really!) and Late Night Wo Hop with Jay ZimmermanDrinking With