Grab A Drink At These 16 Haunted Hotspots In L.A.

Los Angeles is known for its killer nightlife, but about its night-death? Among the glitz and glamour, the city is filled with ghost stories. This Halloween, spy on spirits while sipping cocktails at these 16 reportedly haunted hotspots. Mwahahaha! 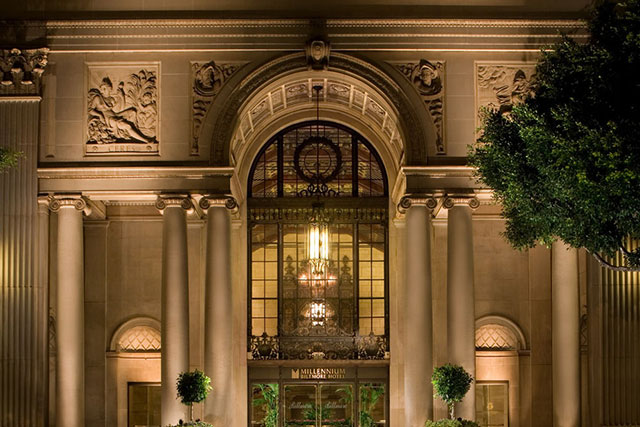 Known simply as “The Black Dahlia” after her gruesome murder, Elizabeth Short was last seen alive at the Biltmore on January 9, 1947. Now, she has cocktail named after her made with vodka, Chambord black raspberry liqueur and Kahlua, which is a popular order at the Gallery Bar and Cognac Room. In addition to the Dahlia connection, paranormal activity is said to be prevalent at the downtown hotel. The elevator regularly stops on the 8th floor for no reason, guests have reported seeing the ghost of a nurse on the second floor and the ghosts of two kids running across the balcony in the gorgeous Crystal Ballroom. Well-known yogi Paramahansa Yogananda’s spirit allegedly lives here, too. He died in the Music Room (now the lobby) of a heart attack in 1952. Another fun fact: The hotel was featured as the Hotel Sedgewick in 1984’s original “Ghostbusters” film where Ray, Egon and Peter caught “Slimer,” the hungry ghost, in what’s now the lobby. 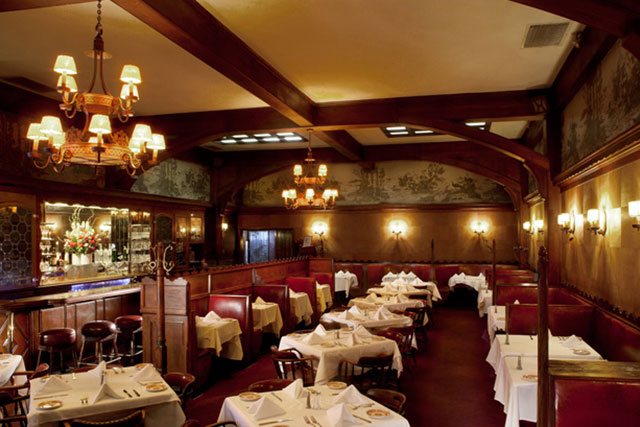 As the oldest restaurant in Hollywood, it’s no surprise Musso & Frank Grill has its share of supernatural activity. Opened for nearly 100 years, (it will celebrate its centennial in 2019), Musso & Frank has welcome many celebrities over the decades with a few lingering in the afterlife.  Errol Flynn, Orson Welles and Jean Harlow ghosts have all reportedly been spotted there. Regulars maintain that the ghost of Charlie Chaplin can still be found cozily settled in the booth where he dined every day for years and was always kept ready for him—No. 1 in the Old Room, right by the window. There have also been alleged sightings of a headless spirit running around, whoever that may be! 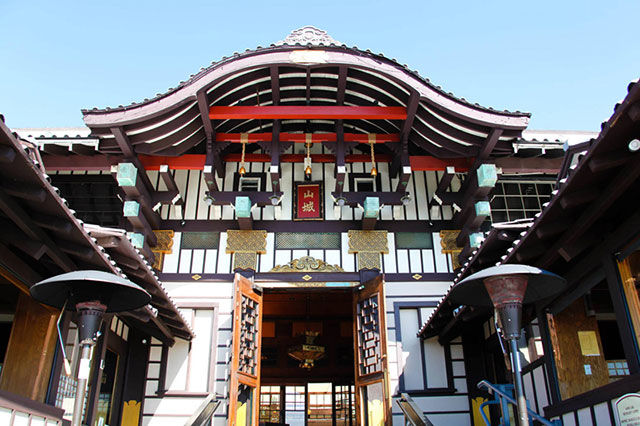 Perched over Hollywood Boulevard, Yamashiro is known has having one of the best views in town, but it also has century’s worth of spooky history to back it all up. In 1948. Thomas O. Glover bought this exotic hillside Japanese-inspired bungalow from the previous owners. He and his wife are said to still walk the inner courtyard where their ashes were laid to rest. And that’s just the beginning. Nighttime security guards have consistently reported strange bumps in the night. Feeling brave?  Reserve table 9 in the Sunset Room. It’s said to be the place where an unhappy lady spirit sits, waiting endlessly for her guest to arrive. 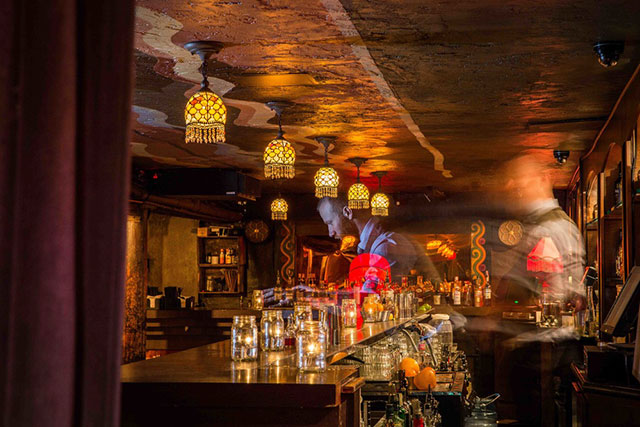 Townhouse is Venice’s oldest bar and its basement, now the home to 1930s-themed Del Monte Speakeasy, was a true speakeasy during the Prohibition era. Back then, the secret bar hid its booze in underground tunnels, which are now used as utility hallways. Some say former proprietor Frank Bennett, who owned the bar from 1972 until his death in 2003, still haunts his favorite corner booth across from the bar. One woman even reported her hair being pulled when she was alone in the bathroom washing her hands. While ghost hunting, we recommend getting in the mood by sipping on the speakeasy’s retro Abbot’s Habit cocktail with Blanco Tequila, white Italian sweet vermouth, chareau, lemon and absinthe. 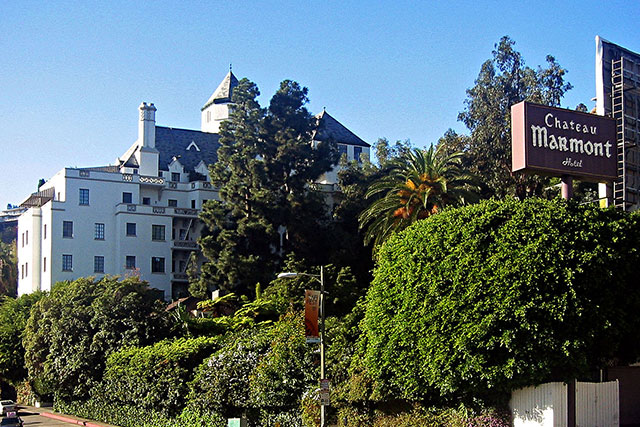 Located on the Sunset Strip, Chateau Marmont has a star-studded history of spooks. Comedian John Belushi was found dead in Bungalow 3 after a hard night of partying in 1982, while doomed starlets such as Sharon Tate and Natalie Wood stayed here shortly before their deaths. Guests and hotel employees have reported windows opening on their own, furniture moving, the sounds of voices when no one’s there and even apparitions of floating heads. Ghosts of famous celebrities such as Marilyn Monroe, Howard Hughes, Boris Karloff and Jim Morrison have also been said to have made appearances at the Chateau. Spy on these spirits while sipping on a martini inside the lobby bar or at a cozy table on the idyllic garden terrace. 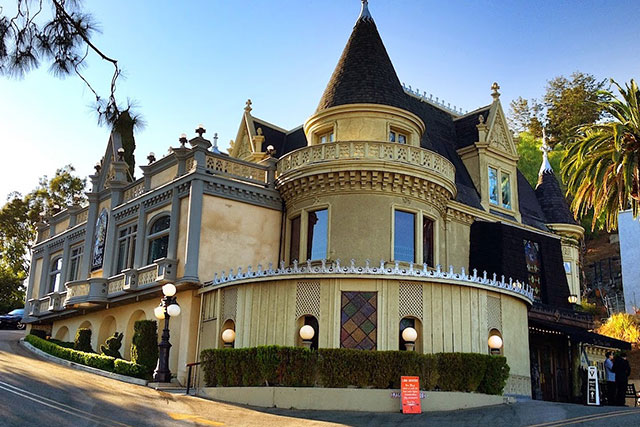 Magic Castle, a nightclub for magicians and magic enthusiasts, bills itself as “the most unusual private club in the world.” It’s particularly unusual due to all the unearthly happenings around the Hollywood property. There’s the Houdini Séance Room, where guests come to make contact with the spirit world. In the Haunted Cellar, the ghost of a young girl has been seen wandering the halls. The music room is said to be occupied by a piano-playing ghost named Irma while a phantom bartender named Loren Tate from the days of old has been seen serving up drinks at Hat & Hare (just one of the five bars inside the Castle). Several people have died here too, including the original owner of the house, Rollin B. Lane and a beloved magician who committed suicide just before he was supposed to go on stage. 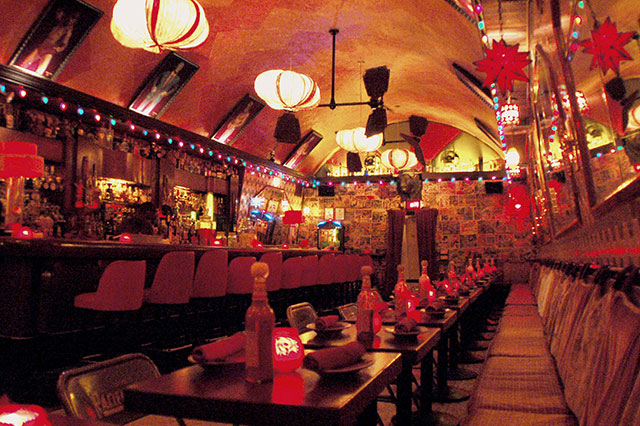 Did you know your favorite Taco Tuesday spot is actually haunted? El Carmen was first opened by widow Encarnación Gomez in the late 1920s and went on to become notorious on the L.A. scene (the classic line up of Fleetwood Mac was formed over tequilas here back in the 1970s). Employees have long felt cold spots in this restaurant and there has also been mystery gifts of candy found – but from whom? Encarnación, her sister Hortencia and step-daughter Martha were known for being “sweet” long ago so some believe it is their ghosts. Decide for yourself over The Silver Mask cocktail made with a Peligroso Blanco, fresh strawberries, fresh coconut water, coconut liquor, served on the rocks. 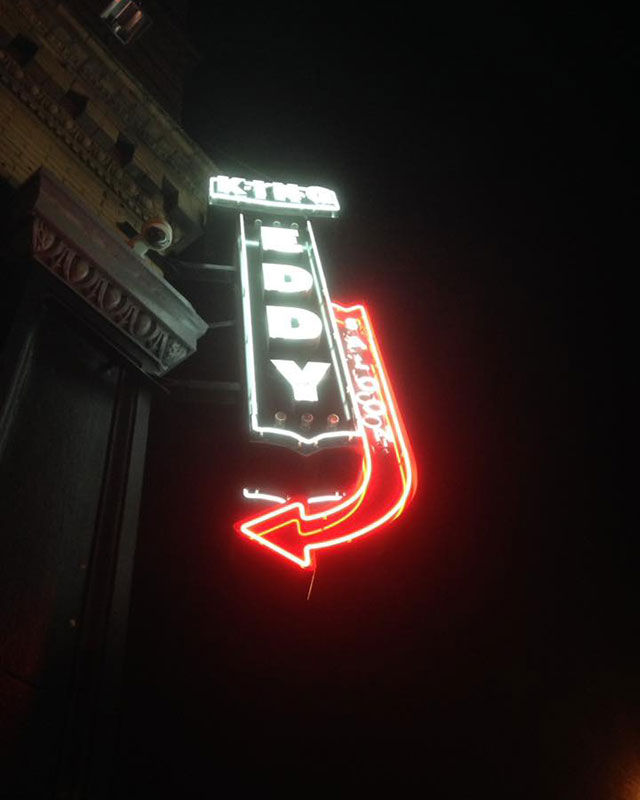 Ever heard the urban legend of the “Vanishing Hitchhiker?” Welcome to its roots. This historical landmark, known back in the day as The King Eddy Saloon, reportedly once had a repeat customer, an often inebriated woman, who would show up late at night and flirt with a male patron before asking for a ride to her home in East L.A.. According to the ghost story, a man agreed one night and even offers her his coat to the shivering woman, but on the way home, she demands the driver pull over at the Evergreen Cemetery where she jumps out of the car, still wearing the man’s coat and disappears into the graveyard. When the driver goes to look for her, she is nowhere in sight, but his jacket is found mysteriously draped over a tombstone with the same name she gave him. Total hoax or totally haunted? Decide for yourself over a hard rock show at this now divey Skid Row music venue known simply as The King Eddy. 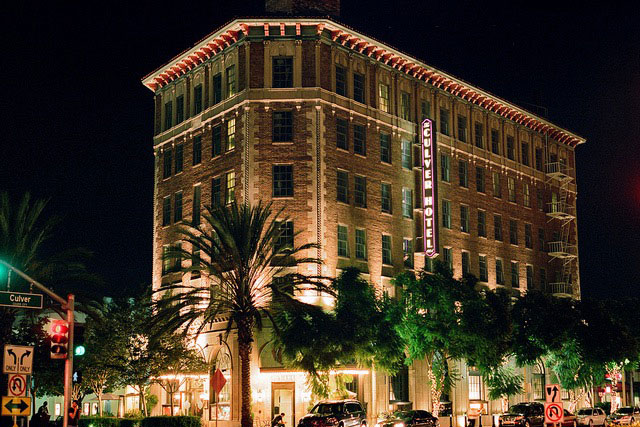 Culver City founder Harry Culver is still said to stroll the creaky corridors of the Culver Hotel. His offices were on the second floor of the fine historic hotel and since his death in 1946, it’s said that staff members occasionally see his ghost wandering around and hear the windows in his personal office bang shut unexpectedly. There are no bedrooms on this floor but guests are free to wander its corridors and rooms. Toast to him over some jazz music in the Grand Lobby with an Old Blue Eyes cocktail, made with Tito’s Vodka and drunken blue cheese olives. 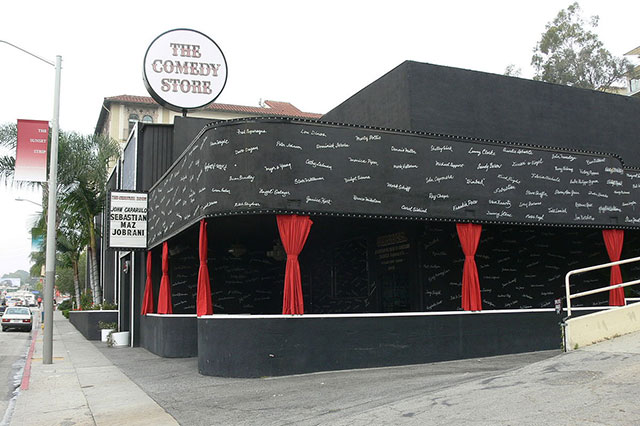 The Comedy Store’s building on Sunset Blvd. originally housed Ciro’s, a hot mob hangout in the ’40s and ’50s. The building still has peepholes in the upper walls of the main room that once allowed mobsters to see who was coming and going. Mickey “The King of the Sunset Strip” Cohen used the club as his base of operations. It is now said to be haunted by several hit men, as well as a woman who performed illegal abortions in the downstairs lounge. Voices and even snarls have been reported coming from the basement. So next time you’re taking in a comedy show, those strange sounds in your head might not be because of the two-drink minimum. 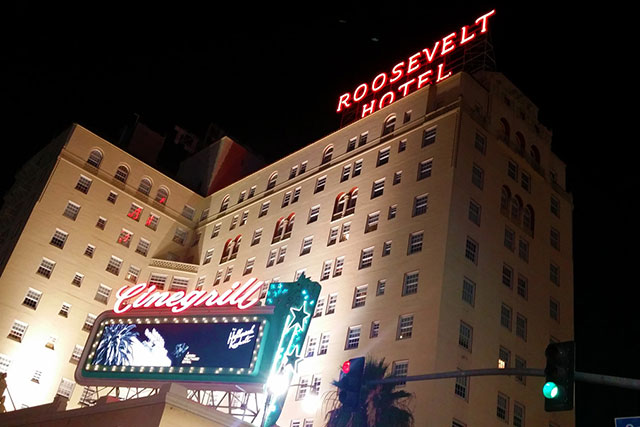 Hollywood Boulevard’s most haunted joint, The Roosevelt, is famous for more than just its Hockney swimming pool. The hotel, which opened in 1927, is crowded with superstar spirits. Shortly after her death, Marilyn Monroe’s image reportedly appeared in a large mirror inside the hotel and has supposedly re-appeared many times since. She has also been seen enjoying her old suite, #1200. Handsome actor Montgomery Clift has been blamed for patting guests’ shoulders and watching maids in Room 928, where he stayed for three months while filming “From Here to Eternity” and the ghost of Carole Lombard has also been spotted floating around the upper floors. In the Blossom Room, where the first Oscars were held, two ghosts, one in a tuxedo and one in a white suit, have been documented. Suicides have happened here too, including former child actor Tom Conlon who checked in one afternoon in 1940 to make his second suicide attempt of the day. Toast to these tragic figures at one of the hotels many bars including the no-menu Library Bar or Spare Room, a prohibition era-style cocktail lounge with a vintage two-lane bowling alley and custom-made wooden board games. 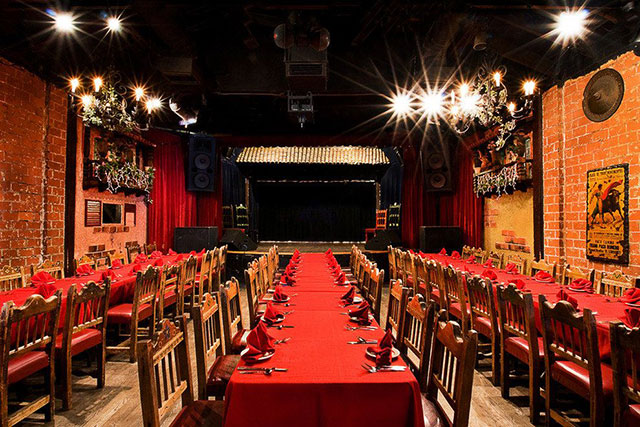 Talk about some rowdy spirits. Silver Lake’s El Cid is rumored to be one of the active paranormal hotspots in the city. Glasses smashing, lights turning on and off, the bathroom locking from the inside on it’s own and beer bottles floating across the bar have all been reported here. Some people have also heard guitar playing coming from an empty stage, which some believe is the ghost of Gino D’Auri, a flamenco guitarist who passed away in 2007 at the age of 69. 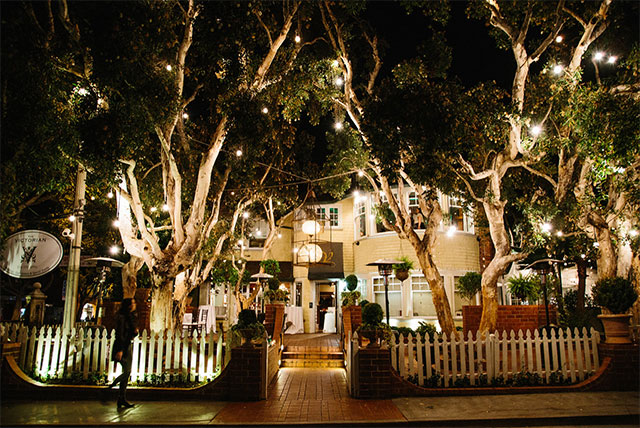 Originally built near the Hotel Miramar in 1892, The Victorian was moved to its current location, Heritage Square in Santa Monica, in 1973. Its last caretaker was an elderly lady named Delia and no one is quite sure who she was or where she disappeared to when the house was moved. Some say she never left. Search for her over a glass of whiskey downstairs at the Basement Tavern, upstairs at LGBTQ+ friendly bar The Birdcage or on the patio at the restaurant Mamacitas. 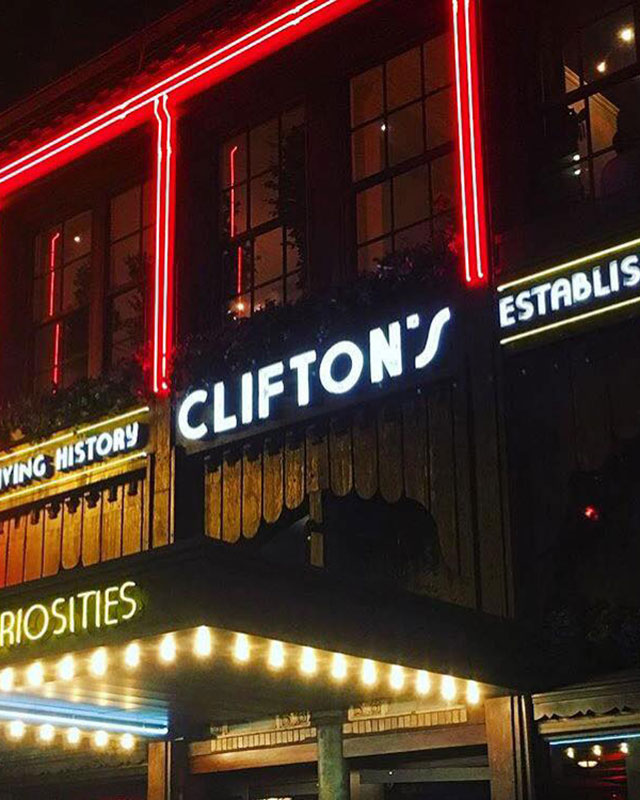 Clifton’s Republic has a history dating back to the Great Depression. Clifford Clinton founded his cafeteria chain on “pay-what-you-wish” system and he never turned away someone hungry even if they couldn’t pay at all. While that all sounds great, there’s a dark side to the story. His lifelong mistress Terri Richmond became so obsessed with him that she had her ashes scattered at the cafeteria. When the former Clifton’s Brookdale cafeteria, from 1935, was being restored for its grand reopening in 2015. workers continually saw (and even photographed) what was said to be the mistress’ restless spirit. Since then, stories about moving ladders, strange orbs of light and weird occurrences keep coming in; The spooky “forest” theme and taxidermied animal decor only adds to this place’s overall eeriness. 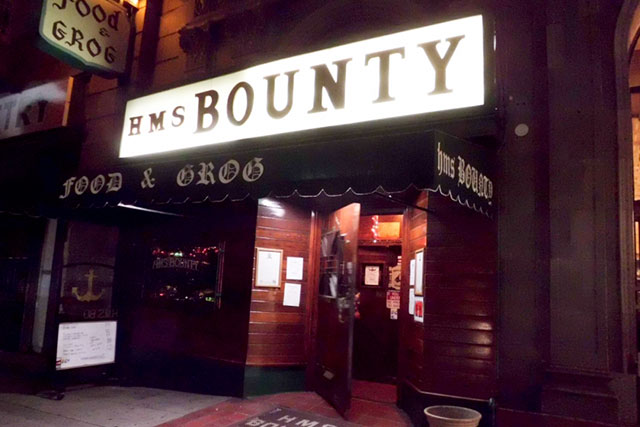 All aboard the haunting! Located in the bottom floor of the Gaylord Apartments, the H.M.S. Bounty is a well-preserved 1920s-era nautical bar built by Gaylord Wilshire, for whom Wilshire Boulevard is named. He actually created the Miracle Mile by building it atop the City Dump which had been a popular place to dump murdered bodies as well. Some women who have used Bounty’s ladies’ room have reported feeling pinched, perhaps from the leering phantom real estate developer who was known for his big ego. 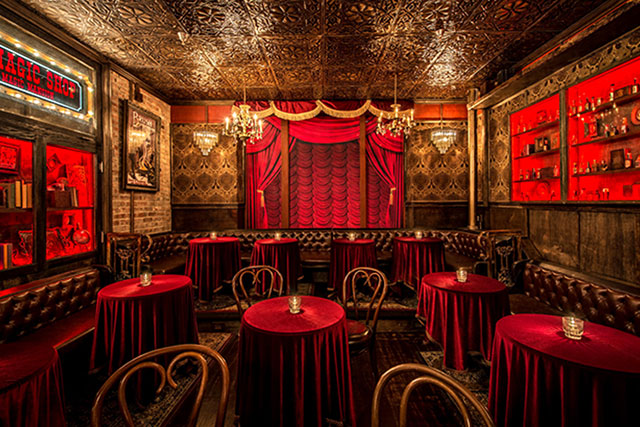 Black Rabbit Rose is a trendy Houston Brother cozy bar/theater located at the 1917 Hillview Apartments building on Hollywood Boulevard (now known as the Hudson Apartments). The historic four-story building is believed to be haunted by its former residents including stars of the silent film era. The building is rumored to have an obscure occult lineage as well, with traces of a Secret Society whose mysteries and rituals have never been fully disclosed. At the bar, order the Dark Arts made with lemongrass vodka, aloe and activated charcoal. 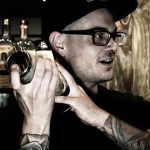 Death Before Decaf, Flip Flops & His Next Move: Drinking With Keith PopejoyDrinking With, Features 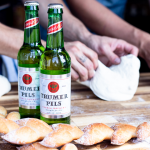