New collaboration alert with award-winning Japanese cocktail bar, Bar Goto, and the storied Edomae-style omakase house, Nakaji. The two have teamed up to offer a limited-edition Hakumai Martini cocktail which is available now through late March.  Created by Kenta Goto, founder, and owner of Bar Goto, this Japanese-inspired “martini on the rocks” pays homage to a generations-old Nakajima family recipe for sushi pickled ginger.

Goto shares about the drink, “The Hakumai Martini is served with Chef Nakajima’s special family ginger recipe – it is the reason for the collaboration. I approached the Nakaji team about developing a cocktail to serve with their sushi ginger after dining at Chef Nakajima’s sushi counter and being wowed by the preparation of his ginger. The intention is that people enjoy the martini and eat the ginger with it — what is special about this cocktail is that they are great enjoyed together.”

A portion of proceeds from each cocktail will go to Heart of Dinner, a non-profit organization focused on assisting the elderly in the Asian community throughout NYC and is currently available at Bar Goto (LES) and Nakaji (Chinatown) 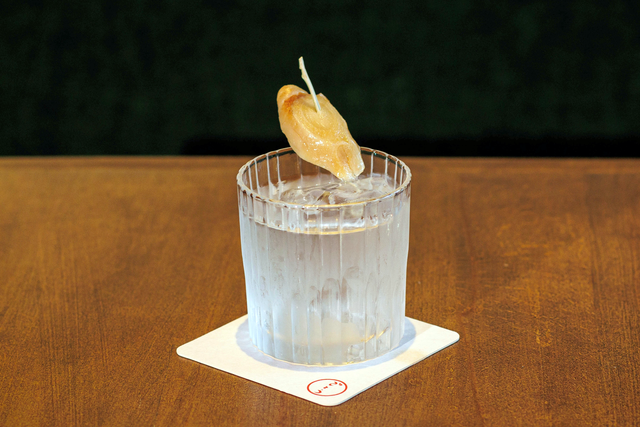 Combine all in a mixing glass, add ice to fill up, stir about 60 times using a Black 5″ Cocktail Stirrer, strain into a rocks glass, garnish with a picked sushi ginger (prepared by Nakaji).

Drink This Now: Hakumai Martini By Kenta Goto2022-02-142022-04-08https://thirstymag.com/wp-content/uploads/2016/04/thirsty-nyc-logo-1.pngthirsty.https://thirstymag.com/wp-content/uploads/2022/02/tinabfoto_bargoto_hakumaimartini-1.png200px200px
About
Tara Fougner
Co-Founder of thirsty, Tara Fougner has over over 15 years of industry experience and a passion for the global beverage community. One might think that Tara was destined for beverage media as her great-grandfather, G. Selmer Fougner, is credited by David Wondrich as being "America's First Drinks Writer." A lifelong New Yorker, you can usually find her hunkered down on some barstool around the world chatting up the bar crew about their beverage program and endlessly taking pictures of drinks for the 'gram. In 2020, Tara was honored by Drinks International on their 'Top 100 Most Influential In the World' List.

The Golden Margarita With Nixta & Altos Tequila Is How You Should Be Celebrating National Margarita DayFeatures, Sponsored