6 Haunted Bars to Drink at this Halloween in NYC

Halloween, Dia de los Muertos, All Hallows Eve – whatever you call it, New Yorkers love it! Being one of the oldest cities in ‘Merica, we have a lot of spooky stories to go along with our landmarked buildings and cobblestone streets. I mean, we can’t blame ghosts for not wanting to leave NYC, we never want to either.  So for all of you that like to get spooked or hear things go bump in the night, here are some of the haunted bars NYC.

“a little girl in a white dress crying that lead up to the street from the basement. Our kitchen guys wouldn’t even go back there for the longest time.” 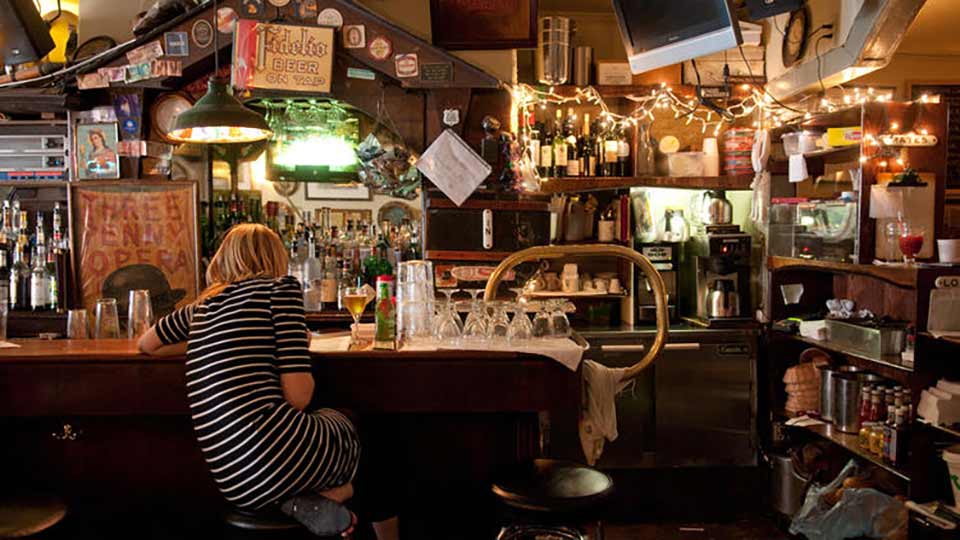 One of New York City’s oldest bars, the Ear Inn has been serving drinks since about 1832 and since it is located so close to the Hudson River, the inn was frequented by sailors, merchants, pirates, and many of the city’s undesirables. Since then the building has allegedly been used as a brothel up until the early twentieth century when it was also a speakeasy. Most often seen is the ghost of a sailor named Mickey, who boarded here in years past and was killed out front. If you are looking to keep it creepy try and get a tour of the upstairs building. 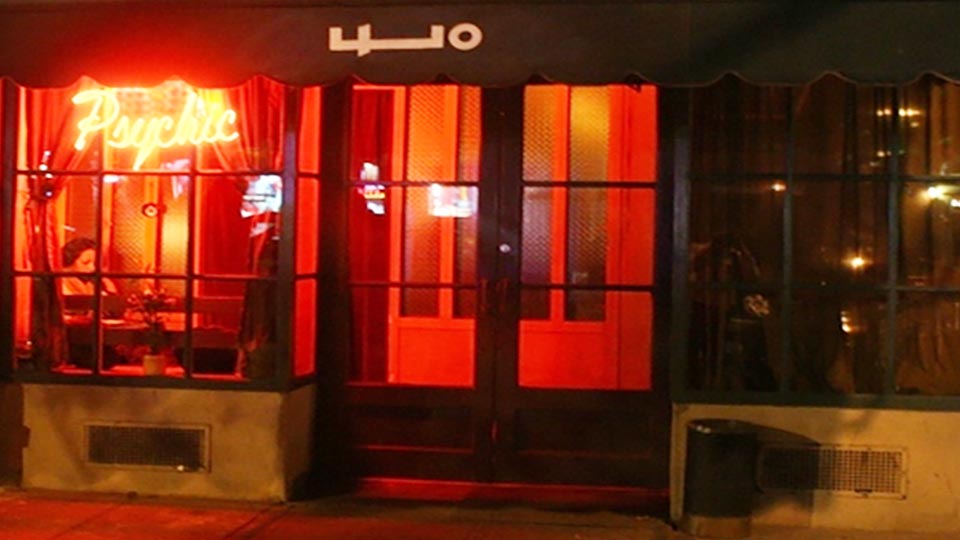 The building that houses E.O. has a history as notorious as the cocktail den that resides in it. Said to have housed a murderer in the early 1900s, this building was constructed in 1827 after the cholera and yellow fever epidemics of Greenwich Village. Nearly 200 years old, there is no doubt that this building has seem some things. So what is haunting the building now?  Principal Bartender, Dev Johnson, shares that there was “a little girl in a white dress crying that lead up to the street from the basement. Our kitchen guys wouldn’t even go back there for the longest time.”

One if by Land, Two if by Sea 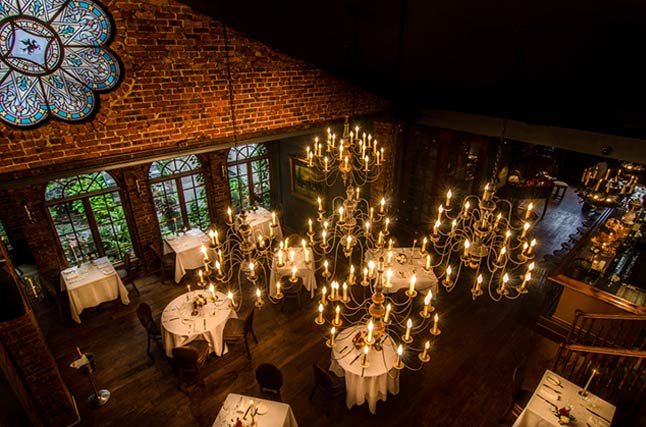 For all you lovers out there, you may have One if by Land, Two if By Sea on your radar for romantic nights like Anniversaries or Valentine’s Day.  However, there is a darker side to this 18th century carriage house in the West Village. Rumor has it that at least 25 spirits haunt the legendary New York space, most notably notorious Alexander Hamilton killer, former Vice President and resident, Aaron Burr. It is said that Burr and his daughter, Theodosia, creep on guests and staff with reports of them flickering lights, throwing plates and that she likes to pull off ladies’ earrings at the bar. Other spooky tales are machines inexplicably turning on, chilling drafts & spine tingles and even one server getting shoved down a flight of stairs. 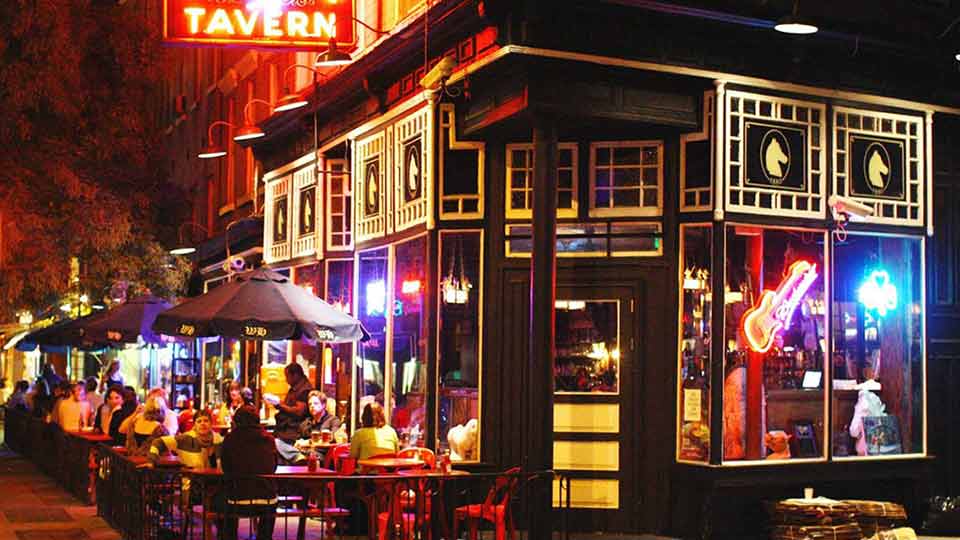 Built in 1880, The White Horse Tavern is arguably the most notoriously haunted bars in NYC and is said to be occupied by the spirit of poet Dylan Thomas. In 1953, he tried to break his record of 18 shots of whiskey and after he stumbled out and passed out on the sidewalk. Thomas was taken to the famed Hotel Chelsea where he slipped into a coma and was rushed to St. Vincent’s Hospital where he ultimately died.

There have been many sightings of Thomas throughout the years, some have seen him sitting at his favorite corner table, others have seen him walking around the block, but the most detailed account is the busboy who claims that there will often be a shot and a beer poured when there is no one else around. Sounds like Dylan Thomas is our type of ghost. 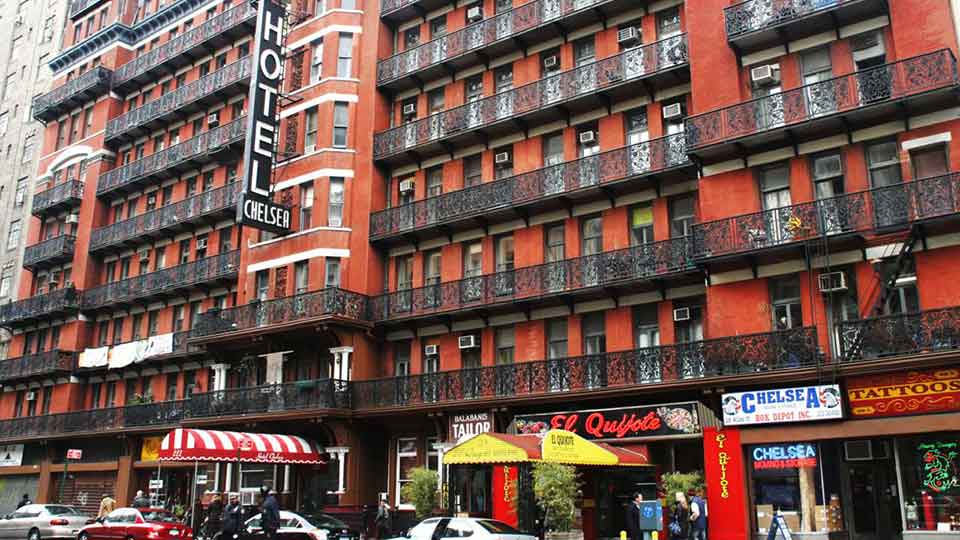 Speaking of The Hotel Chelsea, there no doubt that there are some spooks up in there.  While there are many stories of ghosts wandering the halls of the hotel, we are intrigued by the haunt of the hotel bar. We’re sure you know that Sid Vicious of the Sex Pistols stabbed & murdered his girlfriend, Nancy Spungen, in the hotel. The legendary dysfunctional couple resided in room 100 where they partook in tons of drugs and seriously weird stuff, and on October 12th, 1978, Nancy was found bloody in the bathroom and Sid was arrested for her murder. He somehow got his hands on some more heroin and died from an overdose. It is said that this crazy in love couple also likes to get drunk in love as they haunt the hotel bar messing with bars lights & wiring, making noise and knocking down furniture like only rock stars can. 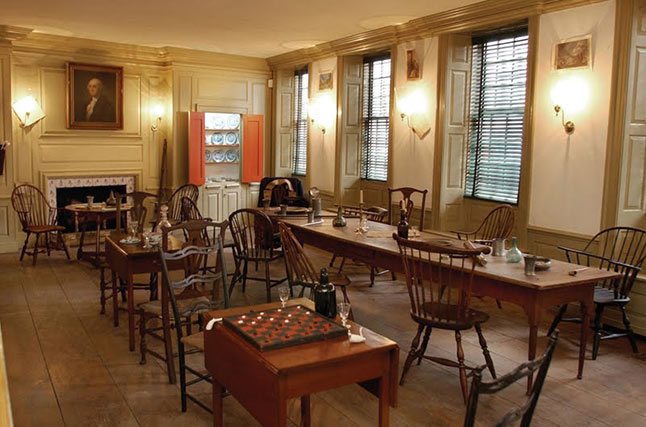 Just one look at the Fraunces Tavern and you won’t doubt that this favorite watering hole of George Washington is haunted. This Revolution era tavern almost seems like it could be a replica of something from our country’s founding days, but it is the oldest standing building in Manhattan and still serving up drinks today.  There have been deaths murders, suicides,  at this Pearl Street locale. Survived two bombings, bizarrely two-hundred years apart in 1775 and 1975, Fraunces Tavern patrons and staff have reported creepy whispers, footsteps, flickering lights and objects being moved from where they were left. It is a favorite of paranormal experts and we are staying the heck away.

Financial District Halloween Halloween Bars haunted bars Stone Street TriBeCa West Village
6 Haunted Bars to Drink at this Halloween in NYC2016-10-262016-10-26https://thirstymag.com/wp-content/uploads/2016/04/thirsty-nyc-logo-1.pngthirsty.https://thirstymag.com/wp-content/uploads/2016/10/drink-cocktails-haunted-bars-nyc.jpg200px200px
About
Tara Fougner
Co-Founder of thirsty, Tara Fougner has over over 15 years of industry experience and a passion for the global beverage community. One might think that Tara was destined for beverage media as her great-grandfather, G. Selmer Fougner, is credited by David Wondrich as being "America's First Drinks Writer." A lifelong New Yorker, you can usually find her hunkered down on some barstool around the world chatting up the bar crew about their beverage program and endlessly taking pictures of drinks for the 'gram. In 2020, Tara was honored by Drinks International on their 'Top 100 Most Influential In the World' List. 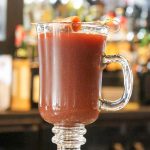 The 11 Most Delicious Apple Cider Cocktails to Drink This FallFeatures 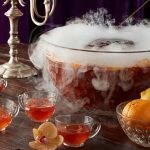 19 Spooktacular Cocktails to Drink This Halloween in NYCFeatures