Hotels in NYC Not Just For Sleeping

There are thousands of bars in NYC – but there is something extra special about grabbing a cocktail inside one of the city’s fantastic hotel bars. Whether a trendy downtown spot or a classic Upper East Side establishment, there are lot and lots of fabulous places to get your hotel drink on. There is nothing quite as glam and sophisticated as pulling up a barstool or relaxing at a luxe table at one of these places which are filled with chic travelers and in-the-know New Yorkers alike. Here are some of our favorite spots for imbibing on your own one-night mini vacation. 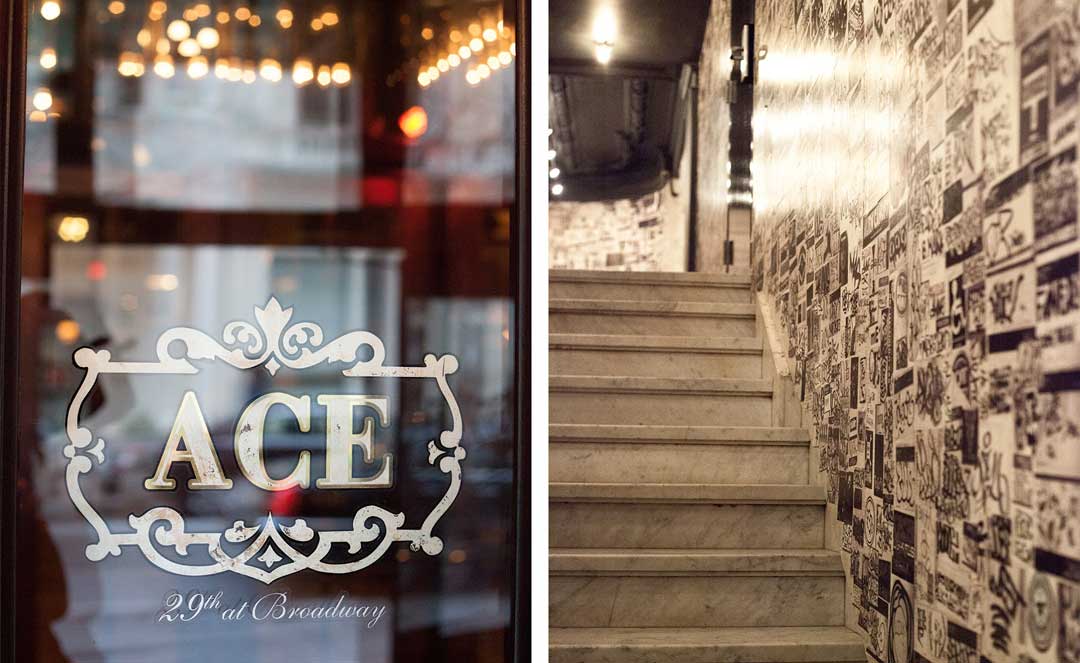 You basically can’t find a cooler spot in NYC. Filled with hipsters on their Macs and iPhones, the lobby of the Ace Hotel is always a buzzing scene surrounded by the impossibly cool people drinking Stumptown coffee. Then, of course, you have the lobby bar in the rear of the room where friendly bartenders serve up amazing after-work cocktails like the Pomelo Paloma – with Pueblo Viejo, Pomelo, grapefruit, chili and  soda – and the Spiced Apple Old Fashioned. Plus, there is a solid selection of beer. And if you aren’t into the lobby bar, there is also the bar inside April Bloomfield’s (of Spotted Pig fame) The Breslin and John Dory Oyster Bar. 20 West 29th Street

BEMELMANS BAR AT THE CARLYLE 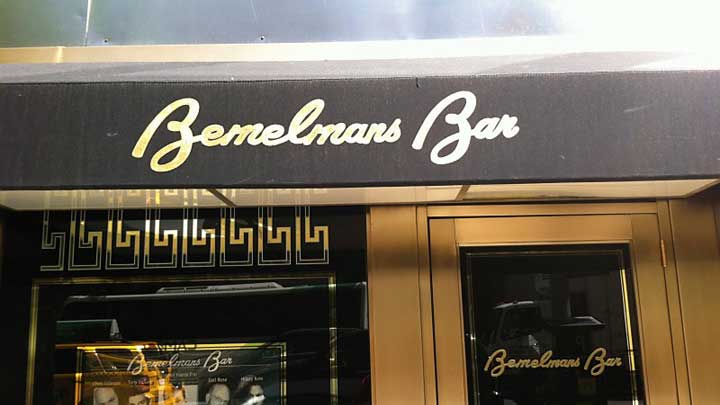 Walk into Bemelmans Bar at the Upper East Side’s iconic Carlyle Hotel and you feel like you’ve been transported to another time in history. Honestly. This place has such a storied past (it was the setting for the Madeline books and the bar was named for the author Ludwig Bemelmans) and charm, you can just feel it from the moment you sit down. The sophisticated menu offers classics like the Pisco Sour, Whiskey Smash and, of course, Classic Martinis served up for about $21 each. Plus, there are live performances from top musical talents including Woody Allen who plays clarinet every Monday with Eddy David and his New Orleans Band.

IDES BAR AT THE WYTHE 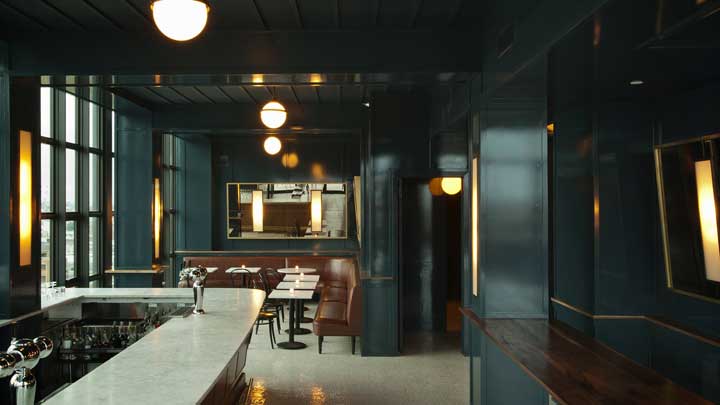 If you’re in Brooklyn, this is the hotel bar to visit. Located on the 6th floor of the Wythe Hotel, the Ides Bar is an indoor/outdoor space run by restaurateur Andrew Tarlow of Reynards (also at The Wythe) and Williamsburg favorites Diner and Marlow & Sons. And while it may be too cold to enjoy the outdoor deck, there are still sweeping views of the Manhattan skyline and reasonably-priced drinks served 7 nights a week. 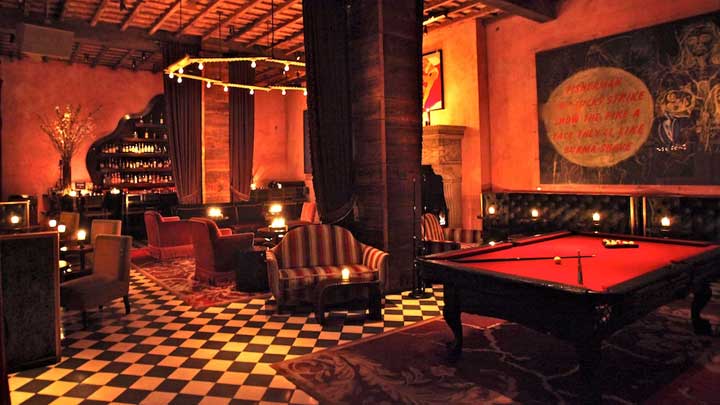 Since opening, the Rose Bar has been one of the hangouts for the NYC cool kids with nary a Midwestern tourist in sight. With enviable artwork curated by artists Julian Schnabel, including a 15-foot print of Warhol’s Rorschach and masterpieces by Damien Hirst and Jean-Michel Basquiat, the place has been attracting the art and fashion crowd since day one. The staff is gorgeous, cocktails like the Elderflower Smash and Ginger Fig Martini are delicious – but will run you about $20 each – and there is nothing quite like cuddling up on a comfy couch in front of the warm fireplace on a cold winter night. Hungry? Guests can order lite bites from the Late Night menu from midnight on.

THE LIBRARY BAR AT THE NOMAD HOTEL 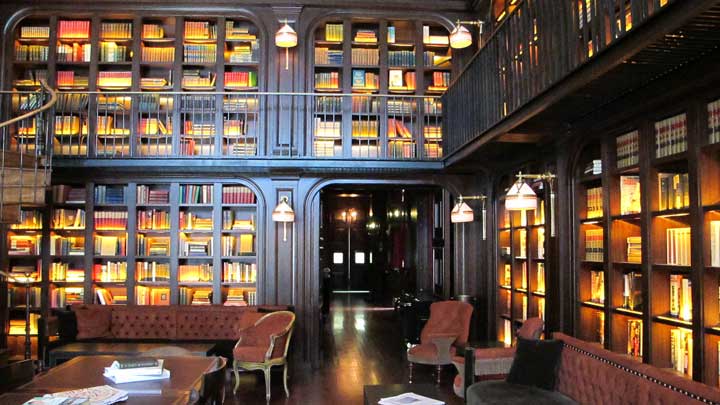 It’s got a 24-foot dark mahogany wood bar. It’s got books. It’s got plush couches, low tables and Persian carpets. It’s god an old-world feel – but the young tastemaskers of NYC are spending their nights drinking there. It looks like a library but this bar is more about the cocktail scene which was created by Death & Co. alum Jessica Gonzalez and includes favorites like the Matchlock – made with rye, bourbon, absinthe, vanilla, ginger, lemon, grapefruit and Angostura bitters, and the ginger and honey accented Start Me Up. There are also bar snacks, of course. 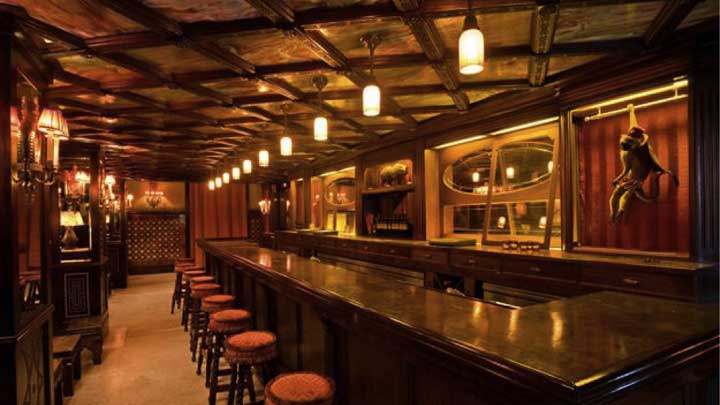 Filled with models, financiers and NYC kids – many of whom definitely look like they are still in high school at Dalton- the Jane Hotel Ballroom is for sure super scene-y and has been since it first opened. There is often a long wait outside, which sucks in the winter when the gusts of wind are blowing off the river, and the bouncers can be a bit gruff. But once inside, there is a raging party going on that kind of feels like a house party but much, much cooler. There are mismatched, beat up couches, lots of nooks and  and fun music to dance to. The cocktails aren’t anything special but you will likely drink a lot of them here.

After undergoing a renovation, King Cole Bar at the swanky Midtown St. Regis hotel is back again – and better than ever. Featuring a massive Maxfield Parrish mural of Old King Cole, King Cole Bar – known as the first place to serve a Bloody Mary in the US which was originally the Red Snapper from Harry’s New York Bar in Paris – also serves up a killer classic martini and a massive selection of high-end whiskey, bourbon and cognac. Expect to pay for the opulence, but  once you’re here, you will understand why.

THE TOP OF THE STANDARD AKA BOOM BOOM ROOM AKA QT

When Boom Boom Room first opened on the top floor of the Standard Hotel on the High Line over five years ago, it was notoriously one of the toughest doors in  NYC. It still is. It’s undergone various name changes and is now known as the Top of The Standard but it still has the best view in NYC, the hottest crowd and really solid – albeit expensive – drinks. With sunken seating and regular celebrity sightings Top of the Standard is like the cooler, more mature sibling to Le Bain, the lounge with the hot tub and turf-covered outdoor deck, located across the hall. It’s best to make a reservation but even that doesn’t automatically guarantee entry.

The Bowery Hotel has that cozy, welcoming feeling – complete with a crackling fireplace and an amazing back patio for hanging out on those perfect spring and summer nights. Done with dark wood and worn in Persian carpets, the classic cocktails can either be enjoyed on one of the bar’s comfy couches or at the bar tucked away between the lobby and the conjoined restaurant, Gemma. This is prime real estate any day, any time so come early be prepared to wait for a seat, especially because hotel guests get first dibs on seating.

If you want to leave your living room but feel like you never did, the Marlton Lobby is the place for you. A brand-new hotel from hospitality genius Sean MacPherson – the guy behind The Bowery Hotel, The Jane and The Maritime- has done a complete overhaul on this historic landmark building that has played host to everyone from Jack Kerouac to Julie Andrews, Lenny Bruce and Andy Warhol’s assassin Valerie Solanas. Maintaining a beatnik vibe, Café Marlton – inspired by F. Scott Fitzgerald’s postwar Paris – is the perfect place for a creative cocktail or a bite, just steps away from Washington Square Park.