It’s 1:00 on a Wednesday and I’m at a bar. I don’t usually drink during the day, but this is a special occasion. There are ten bottles of hard-to-find vermouth set out in order from dry to sweet and eleven bartenders ready to taste through them. The sun blasts through the picture window, filling the room with warmth. Someone starts telling a story, “I had a dream last night about that carrot eau-de-vie…”

Twenty-five years ago it was hard to get a decent Manhattan most places, let alone artisan vermouth. And then, one by one, a handful of very passionate, very driven bartenders started educating themselves on how things were done in the Golden Age of cocktails and a movement began. First, it was classic cocktails made true-to-form, and then it was new cocktails, drinks they’d never dream of in Jerry Thomas’ time, creative leaps born from a deep knowledge of spirits and the mystical laws of combining them. 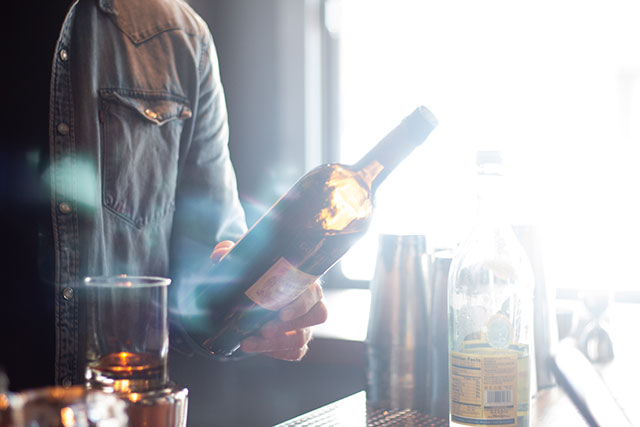 In the early days of the Cocktail Revival, hungry young bartenders often found themselves at establishments that didn’t share their fervor, so they sought each other out in their off-hours, visiting another spot to study a respected bartender at work, or forming groups to share knowledge and entice distillers to take the time to speak with them. Today, if a bar wants to be a “craft cocktail” destination, the owners have to commit to some kind of continuing education program that keeps their team current in the ever-evolving world of mixology. At ABV, that training is called Bar Lab, and it convenes once a month.

Today’s main task is tasting through some very esoteric bottlings. I’m a fan of vermouth, and there’s only one bottle on this table that I’ve seen before. ABV has a second, smaller bar inside called Overproof and the team is looking for new spirits to put on the menu. Co-owner Ryan Fitzgerald starts pouring tastes while co-owner Todd Smith reads to us from his notes. Todd tells us about the region, the production technique, the base wine, and then comments start flying as people take their first sip. “Oxidized,” someone calls out. “Definitely, and a little salinity too,” answers co-owner Erik Reichborn-Kjennerud. 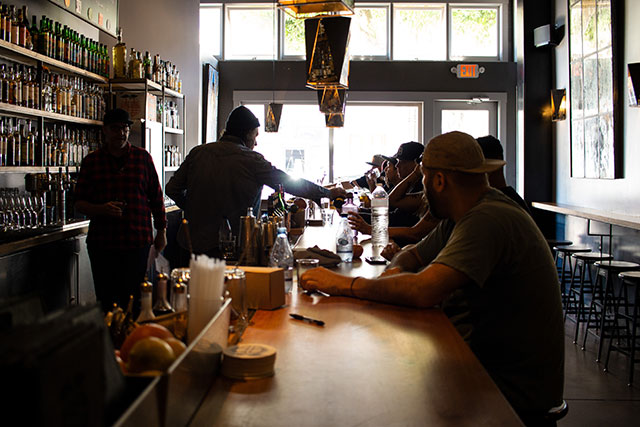 Because I’m a relative newcomer to this world, I’ve had to read about the Cocktail Revival (Shanna Farrell’s “Bay Area Cocktails” and Robert Simonson’s “A Proper Drink” are both invaluable) to get perspective on just how fast the pace of change has been over the past two decades. By the time I got into cocktails five years ago, rye whiskey was everywhere. But when these guys started, it was almost impossible to find. As new spirits become available, what we call quality changes as well. Brands that once sat upon the top shelf have been relegated to middle shelf status as distributors pick up products from smaller producers.

At the same time, bartenders like Todd (who was the driving creative force behind the groundbreaking Bourbon & Branch) and Ryan (who was an opening bartender at the influential bars Tres Agaves and Beretta) have been doing this for the better part of those decades. I ask them if the opportunity to taste more unique products, like these vermouths, is the thing that keeps them excited about their profession, and to my surprise, they say it’s not. 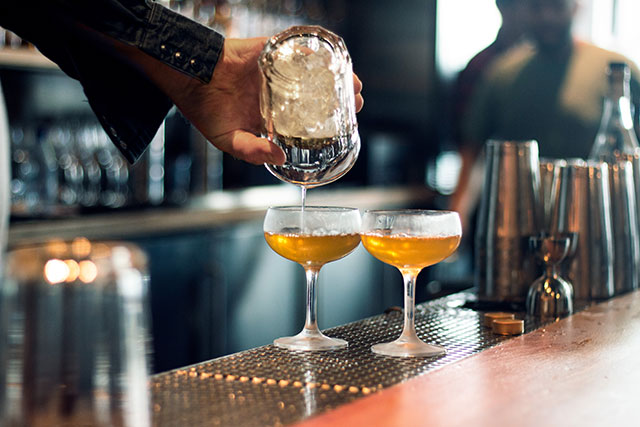 “Guest experience,” Ryan says, and Todd agrees. “People come in because they trust us. So if we put something crazy on the menu just to be crazy, we run the risk of sacrificing that trust.”

Ryan comes down the line, pouring the next tasting. It’s a dry vermouth, Italian, and almost immediately someone says “oregano” which prompts someone else to say “perfect for that pizza cocktail you’ve been working on” and then out of the laughter emerges the voice of Cecily Kllanxhja, who brings down the house when she tells the room she had a dream about the carrot eau-de-vie they’d tasted at a previous Bar Lab. In her sleep, she mixed a cocktail with it that tasted like a Buffalo chicken wing.

All of this is very different from what I’d imagined before coming here. I thought the afternoon would be more focused on testing cocktails than tasting spirits. I thought the atmosphere would be more competitive than convivial. And I’d been worried that the crew wouldn’t be thrilled about having an outsider, me, in the room. But none of that was true. The mood was so relaxed that, with the sunlight and the alcohol, it had a kind of narcotic effect. No one minded me bouncing around the room taking pictures or offering my own feedback on the aperitifs. The experience was everything I love about being in bars. 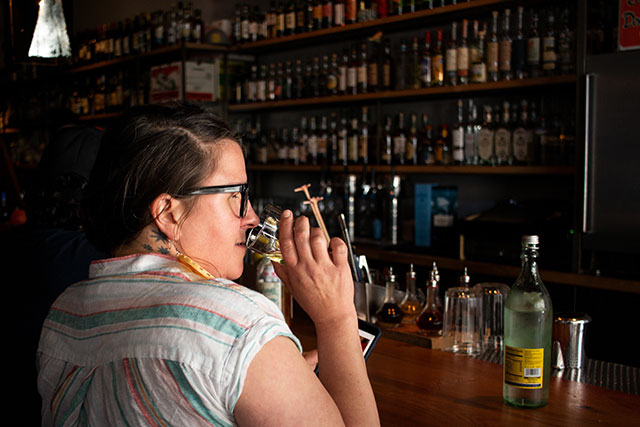 It’s ten minutes to opening by the time we sample the last bottle. Todd asks if anyone has a drink they’d like to share and a couple folks step behind the bar. The first, by bartender John Gertsen, features a peated Scotch with creme de cacao and a few other ingredients I’m not quick enough to catch. “Too sweet,” he says, criticizing his own drink before anyone else can. But the feedback is all positive. “That finish lasts forever,” Todd tells him.

The second drink, by bartender Benjamin Jeffers, takes ABV ’s house-made pineapple sherry, carbonates it, then adds to it a tiki-like base of rum and lime. He doesn’t think it’s quite there yet, but I think it’s divine: amazingly light, wonderfully effervescent, dry without being too tart. And then the doors are opened, a few guests walk in, and real-life resumes. 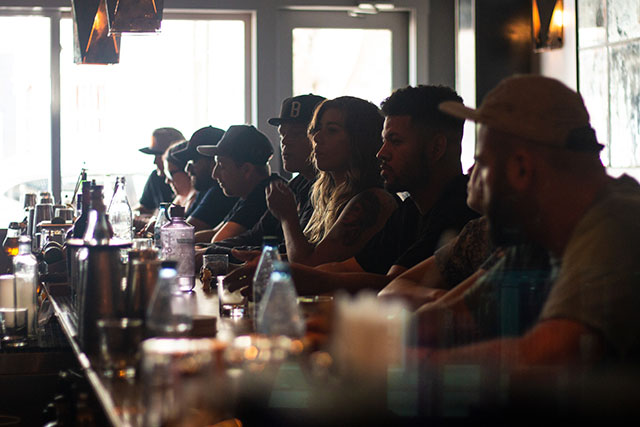 I stay for lunch, ordering a rancio wine to go with my pulpo a la plancha. A couple members of the ABV team stick around to talk through drinks they’ve been working on. A bartender I recognize from another highly-regarded establishment stops in for a drink on his day off. We start talking about fortified wines, the new styles that are becoming available, drinks we’ve had that take them to new places, and just like that the Cocktail Revival continues apace.

Vermouth Where to Drink in San Francisci
An Insider‘s Look at the Cocktail Revival at San Francisco’s ABV2019-11-132019-11-12https://thirstymag.com/wp-content/uploads/2016/04/thirsty-nyc-logo-1.pngthirsty.https://thirstymag.com/wp-content/uploads/2019/11/cocktail-revival-featured.jpg200px200px
About
Matthew Wyne
Matthew is a graphic designer with a cocktail obsession. He blogs about the history of cocktails and cocktail design at Letters and Liquor 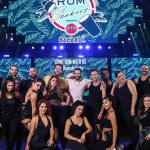