The Meatpacking District just got a little more caffeinated, thanks to Kobrick Coffee Co., which opened their first cafe and cocktail bar on 9th Avenue last fall.  Four generations and 90+ years later, they have their first coffee shop intended to showcase their coffees and delicious cocktails. 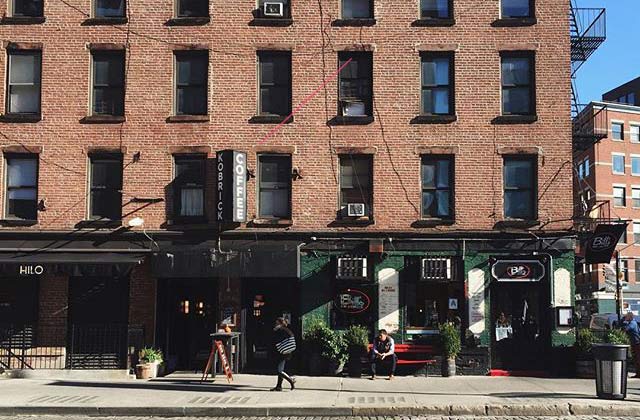 The space is on a bright, lively, cobblestone street in the Meatpacking District. The space features a small open kitchen and espresso bar which then opens up to a long bar, which serves up the venue’s cocktails. There is a small seating area in the back with about half a dozen tables, enough room for 2-4 people each. To the left, there is a narrow bar with stools for those who would prefer to have their coffee and pastries to stay, but with brevity. The space is filled with mirrors: a long one running the length of the bar, a 3 panel mirror in the back, and two other large mirrors in the seating area (not to mention the large mirrors in the bathroom; selfies, anyone?).

At night the lights are dimmed and the stools are moved from the narrow bar up to the brew bar where baristas and bartenders work in unison; this is what we’re focusing on today. Kobrick is all about coffee and the neighborhood has lively nightlife. It was only natural that the two would merge and give birth to Kobrick’s coffee cocktail program (They have non-coffee cocktails too!). The theme here is to use coffee as an aspect of the cocktail, not just an addition. Here are some of my favorites:

This is your classic negroni (London dry gin, sweet vermouth, compari) put through what may not be familiar to most: a Kyoto-style cold brewer. This piece of equipment is traditionally used to make cold brewed coffee. Kobrick’s take is to blend gin, sweet vermouth and Campari with Kobrick’s bright, full bodied single origin Kenya coffee which is then made over a three-hour period in a Yama Cold Brew Drip Tower. The entire cocktail drips through to create the Negroni. The resulting brew is like the classic but a little lighter, with the edges rounded-off a bit. The coffee brings another dimension of flavor and brings out more of the sweetness. Fantastic drink to start off the evening! 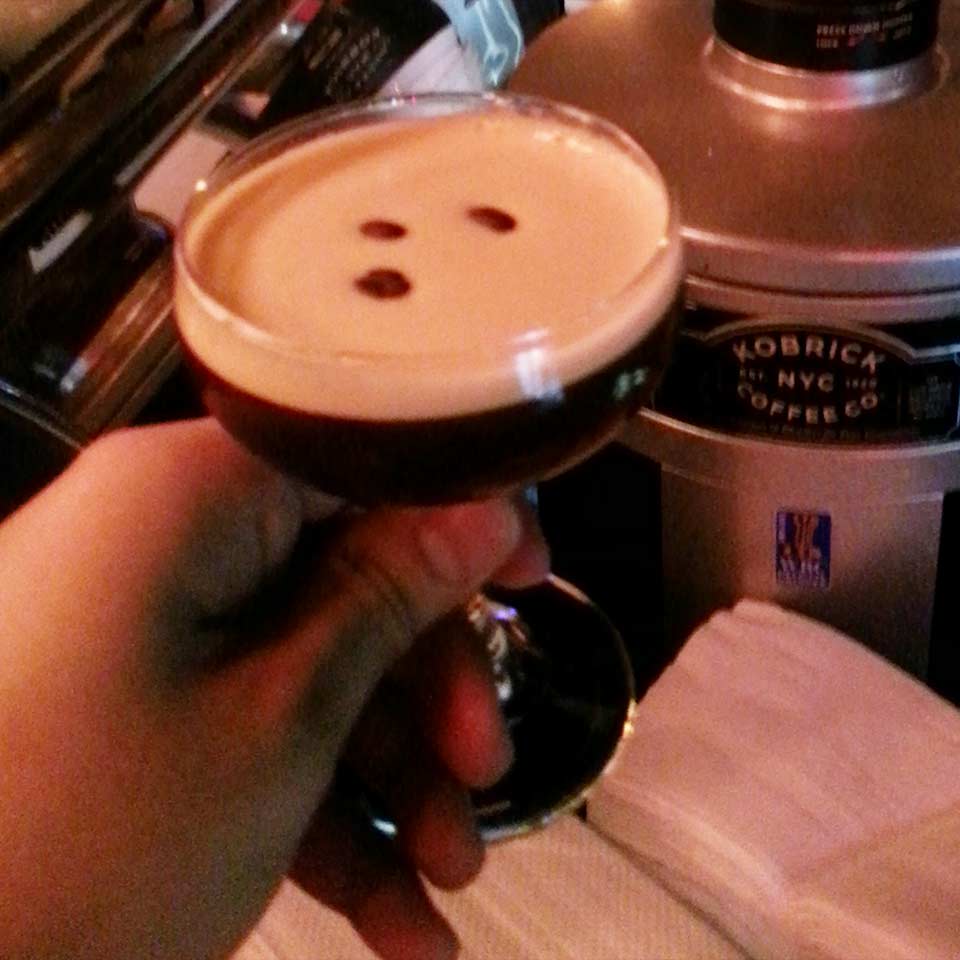 Quite possibly my favorite of the night: reposado tequila, a ristretto shot of their Tiger Stripe espresso, amer china china, and agave nectar. You get the flavor and aromatics of the tequila and espresso but neither overpowers or gets overshadowed by the other. The amer china china and agave nectar help bring the drink together making it balanced and very drinkable. It’s the next evolution of the Espresso Martini; I’m calling it now!

On that tequila note, I have to mention the Voodoo Guy! Although there isn’t a coffee component it’s a great margarita variant made with jalapeno-infused mezcal, lime juice, simple syrup, and muddled ginger. It’s a substantial drink; the spice and smoke definitely come out front and center. Tread lightly: it’ll have you under its spell if you’re not careful!!

The Brunch Staple. Kobrick’s version uses a Chemex (a nonreactive, hourglass-looking brewer used to make pour over coffee) to infuse vodka with fresh horseradish, habanero, lemon, salt, pepper, and Worcestershire sauce. Organic tomato juice is then added. Tasted great and I don’t even like tomato juice! 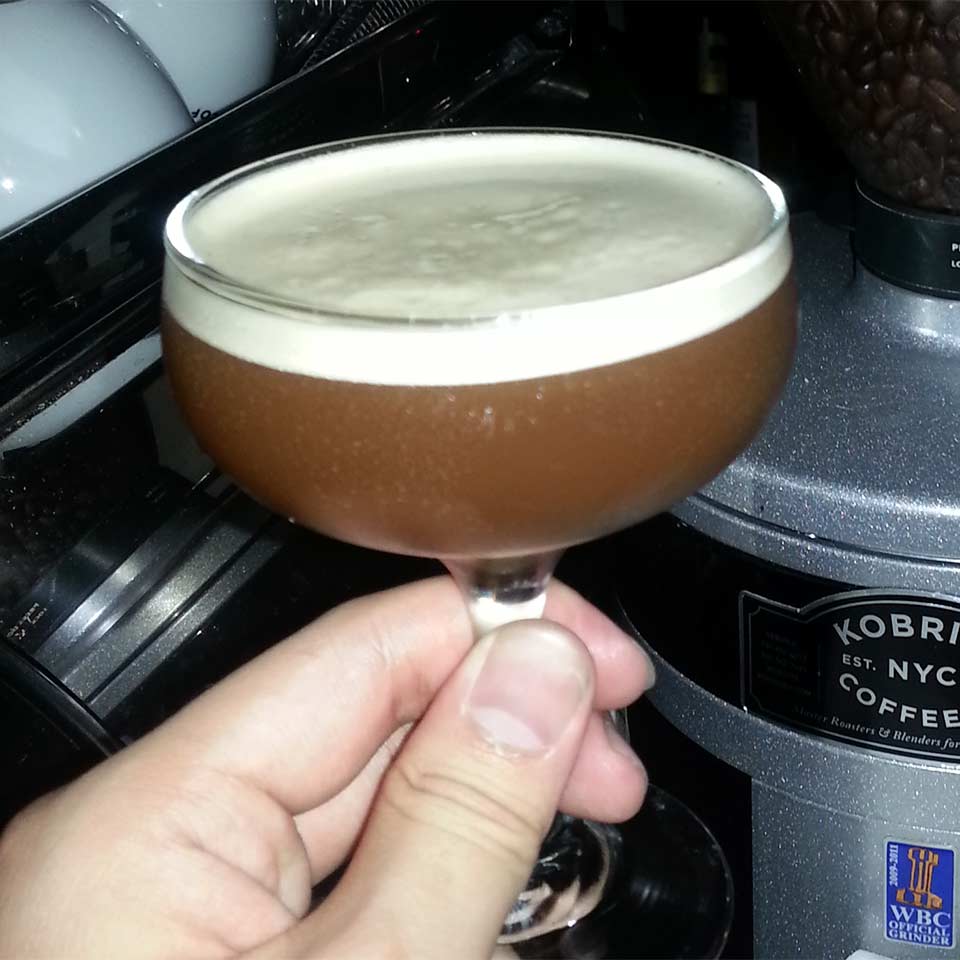 Last drink I *have to* note. Cold brew shaken with coconut oil and egg white. It’s delicious, like drinking a coffee cloud. It looks like a cocktail to the unassuming eye (ask the bartender to drop a few coffee beans in and it’ll look just like the Mexican Jumping Bean!), great for people who aren’t drinking or don’t drink alcohol to feel included. No one likes sipping on a Shirley Temple while everyone else gets pretty cocktails.

cocktails Coffee Espresso
Kobrick Coffee Co. Now Serving Up Cocktails in Meatpacking2016-03-292016-08-23https://thirstymag.com/wp-content/uploads/2016/04/thirsty-nyc-logo-1.pngthirsty.https://thirstymag.com/wp-content/uploads/2016/03/kobrick-coffee-opens-meatpacking.jpg200px200px
About
Steve Ta
Steve is a recent Baruch graduate with lifelong love of food and drink. To him, the quality is just as important as the benefit cost ratio. He can be found walking through Manhattan, headphones in, looking for the next undervalued gem. Steve has had a love affair with coffee since elementary school that blossomed in college, along with his growing desire to understand cocktail culture. Steve shares snippets of if life and meals on Instagram @_neznayu and his drinks on @nycawfee 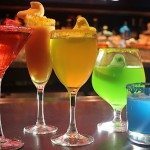 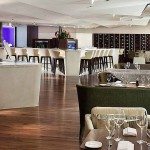