EST.33 Thai Craft Brewery & Kitchen holding its inaugural Miami Beer Week, from September 18 to 26.  The new expansive, open-air beer garden at EST.33 is hosting this celebration of Miami’s booming craft beer culture as well as Bavarian style brews and cuisine as an ode to Oktoberfest.  The Asian-fusion BBQ restaurant and on premise craft brewery (brought to Miami by  Thailand’s premier brewer, Singha Beer), is located on the fourth floor of Brickell City Centre, a five block-long shopping, dining and entertainment complex in Downtown Miami’s financial district.

During Miami Beer Week, EST.33 will premiere two new German-style beers for beer aficionados to sample the very first sips including the Golden Glades Festbier. This 6% Golden Lager, which is based on the beers served in Bavaria during Oktoberfest, is ideally enjoyed in the German style full liter pour.

The Munich-brewed Festbier, also known as Wiesn or Oktoberfestbier, replaced the original, and stronger, amber-colored Märzen as the only lager brewed for the Oktoberfest season. The golden Festbier perfectly balances a light taste of hops and a strong note of malt.

The brewery will also be pouring out pints of their new “Li’l Smokey” Rauchbier – a take on the Bamberg original Smoked Beer that dates back to the 1400s. EST.33’s Rauchbier is prepared by smoking malt in EST.33’s own smoker and steeping the smoked grain in a batch of the brewery’s popular One & Only Kopper. This new brew will pair perfect sausages, which Executive Chef Sean Bernal will be cooking up all week long for guests to enjoy. 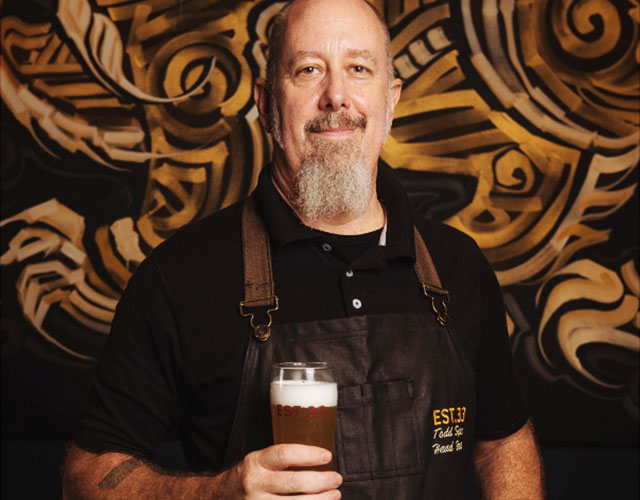 Additional local brewery attendees, who will be pouring Bavarian-style brews during Miami Beer Week, include:

Throughout the week, EST.33 will also be serving up delicious daily food specials that perfectly pair with all of their Oktoberfest brews. Their Miami Beer Week Special Menu will feature $5 beers including all guest brews on tap and a $5 beer bites menu showcasing a rotating selection of Bavarian style small plates for guests to indulge in all week long.

Those curious for a sneak peek inside the brewery can take advantage of complimentary brewery tours led by Head Brewer Todd Space, and the EST.33 brewers, from 1 pm to 5 pm daily.

While groovin’ to beats by Ivano Bellini, beer lovers can also sample delicious tasting-size portions of Bavarian inspired dishes made with an EST.33 twist courtesy of Executive Chef Sean Bernal and guest Chef Cindy Hutson of Ortanique on the Mile and Cerveceria La Tropical.

Attendees will also receive a commemorative Oktoberfest EST.33 glass mug to take home. and continue the celebration all month long.