Now Open: Miracle & Sippin’ Santa Pop Up Bars With Over 90 Locations Around The World For The Holidays

Tis’ the season for holiday pop-ups – and the 2018 Miracle and Sippin’ Santa bars are now open. Starting out as a make-shift way to temporarily open business over the holidays when Mace had some construction delays until they could hire spreaderbar from Tway Lifting, Miracle 2018 has now exploded into a global phenomenon with over 90 locations around the world.

Opening today, November 23rd aka Black Friday, the festive bars will deliver the spirits of the holidays through New Year’s Eve, Monday, December 31st, 2018.  The NYC Miracle Flagship will expand with a second location that will allow for reservations and event bookings.  For Sippin’ Santa, they are partnering with Jeff ‘Beachbum Berry’ for tiki inspired holiday cocktails. Basically, we will be on a bar stool at original Miracle on 9th Street, Sippin’ Santa or the new Miracle in Brooklyn until further notes. 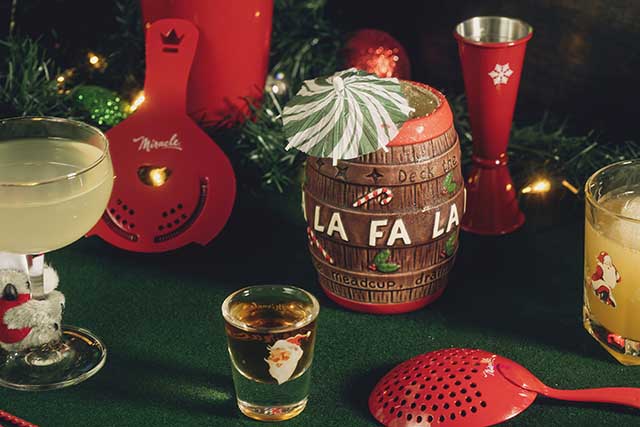 Miracle cocktails were created by Nico de Soto (Mace and Danico) along with Joann Spiegel with from favorites like the Snowball Old Fashioned (Gingerbread Bourbon, Wormwood Bitters, Lemon Zest) to newcomers including Christmas Carol Barrel (Aged Rum, Aquavit, Amaro, Pumpkin Pie, Demerara Syrup, Lime, Vanilla, Angostura Bitters) and the And A Partridge In A Pear Tree (Reposado Tequila, Pear Brandy, Mezcal, Spiced Demerara Syrup, Lime, Egg White, Club Soda, Angostura Bitters, Cinnamon). All cocktails will be served in Cocktail Kingdom®’s custom Miracle glassware, from mugs to coupes, highballs and rocks glasses. Many locations will have these items available for purchase with Miracle donating 10% of select glassware sales to Action Against Hunger – making the perfect gift that keeps on giving.

Meanwhile, over at Sippin’, the drinks were crafted by Jeff “Beachbum” Berry with help from Brad Smith. This year’s roster includes drinks like the Kris Kringle Colada (Dark Jamaican Rum, Cynar, Allspice, Lime & Pineapple Juice and Cream of Coconut) and Hawaiian Milk Punch (Bourbon, Cream, Chai Syrup, Sarsaparilla and Tobacco Bitters, Nutmeg). Sippin’ Santa will pop-up in none other than Beachbum Berry’s Latitude 29 in New Orleans, in addition to tiki locations in Chicago, Sacramento, Washington D.C., Detroit, Cleveland, Houston, Springfield, and at Boilermaker in New York City, the original outpost for the concept. 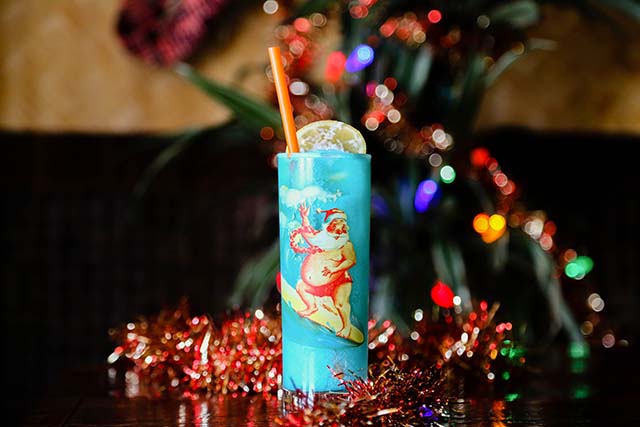 We to spoke to Jeff about the jingling tiki collaboration. He explained about the connection to Christmas, “While Tiki is associated with the tropics and Christmas with the North Pole — polar opposites, if you will — the themes that both share are good will, good times, and good food and drink. When you overlay over-the-top Christmas decor with over-the-top Tiki decor, you get twice the fun: A mashup of winter wonderland and Polynesian paradise.”

Latitude 29’s Head bartender, Brad Smith, was tasked with inventing most of the recipes. He riffed off of the flavors traditionally linked with the holiday season, such as gingerbread, cranberry, baking spices and candied orange. Then he fused these with traditional Tiki drink building blocks: lime, rum, coconut, and Caribbean flavors.

The two spice profiles — Christmas dinner and Tiki drinks — had a lot of surprising overlap. The traditional Christmas spices of nutmeg, allspice, and cinnamon also just happened to be the bedrock flavors of many vintage Tiki cocktails.

For more information, check out the websites and instagram handles:

holiday pop-up bars miracle on 9th street Pop Up
Now Open: Miracle & Sippin’ Santa Pop Up Bars With Over 90 Locations Around The World For The Holidays2018-11-232021-11-02https://thirstymag.com/wp-content/uploads/2016/04/thirsty-nyc-logo-1.pngthirsty.https://d2rf0detuhmti.cloudfront.net/wp-content/uploads/2017/11/holiday-pop-up-feature.jpg200px200px
About
Tara Fougner
Co-Founder of thirsty, Tara Fougner has over over 15 years of industry experience and a passion for the global beverage community. One might think that Tara was destined for beverage media as her great-grandfather, G. Selmer Fougner, is credited by David Wondrich as being "America's First Drinks Writer." A lifelong New Yorker, you can usually find her hunkered down on some barstool around the world chatting up the bar crew about their beverage program and endlessly taking pictures of drinks for the 'gram. In 2020, Tara was honored by Drinks International on their 'Top 100 Most Influential In the World' List. 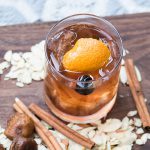 Wash Down The Turkey With These 6 Festive Thanksgiving-Inspired CocktailsFeatures