Pioneering bar owner and impresario of the sustainability movement Ryan Chetiyawardana looks enviably content, pecking away on his laptop, kicked back in a late-afternoon sunbeam when I meet him in the sunken living room area of his latest project, just days away from opening. Super Lyan—a combo garden lounge and cozy neighborhood bar inside Amsterdam’s Kimpton De Witt Hotel—opens to the public bright and early on April 19 in the city’s central Palace Quarter district.

Perhaps the meaning of this at least outward calm amid the storm of active construction is that change has just become the new normal for the 2015 International Bartender of the Year. Opened in 2015, Chetiyawardana’s Dandelyan earned the World’s Best Bar superlative twice in just two years. Then, Chetiyawardana famously and unexpectedly announced the four-year-old bar’s impending close by Instagram just days before word of that final award dropped in 2018.

The bar in Sea Containers London (formerly Mondrian London) on the Thames has since become the “weird and wonderful” Lyaness, while his first bar, 2013’s waste-eschewing White Lyan, later begat the luxury “cocktail restaurant” Cub and the more playful, casual subterranean Super Lyan. The latter project (since closed) now lends its name to the Lyan Group’s first project outside of London.

It’s a fitting placement as the De Witt is Kimpton’s first European installation, open since May 2017. Previously the Crown Plaza, the property comprises three 17th century Dutch Golden Age houses that once looked out on the canal that has since been filled in to construct the frontage street. The property was also home to the House Bar, which is now part of Super Lyan. 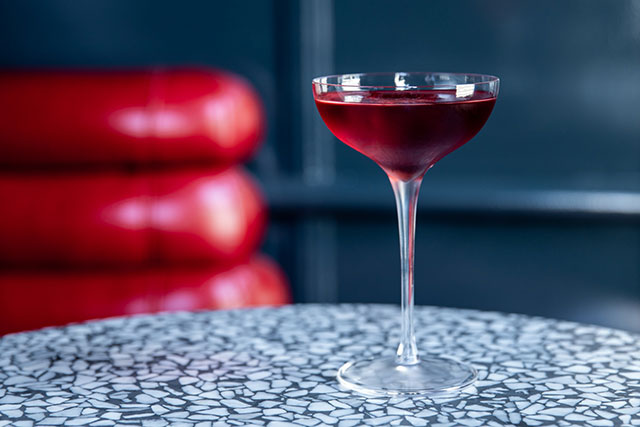 Recently in town for work, I reached out on the off chance that Chetiyawardana might have a second for a quick peek and a sure-to-be harried chat. Despite the swirl of construction, I found a man incredibly calm and ready to converse at length about his vision. Looking beyond the mundanities of seats and menus (confirmed: Super Lyan will have both!), Chetiyawardana has given over much of his pre-opening attention to the intangibles of ethos, purpose and sense of place, and seems ready to free-range parent his sixth venture and let it grow into whatever it needs to be.

After spending considerable time in the city, Chetiyawardana was inspired by Dutch progressiveness and optimism. He saw that sentiment reflected in the era immediately following World War II when, he says, “we were all kind of breathing a sigh of relief and taking a beat and maybe looking on the brighter side of things.” Guests will experience this, Chetiyawardana hopes, as warm, genuine hospitality.

“That optimism is something that we’ve channeled to be able to give the team the chance to really look after people and create something that feels like a little bit of an escape and something that feels quite fun but still feels everyday,” Chetiyawardana says. “One of the things that we were excited to bring to the city was to open up cocktails to a wider audience of people. That there are some great cocktail bars here being led by some really passionate young bartenders, and a burgeoning food scene that, again, is being led by some young chefs. So, how can we use all of that excitement and optimism around food and drink to show people that it’s about bringing people together?”

The answer can be found in Chetiyawardana’s philosophy of ‘re-imagining the familiar,’ that is, his delight in challenging and rethinking expected experiences. So, a “Frozé Margarita” is unburdened by way of less unctuous source of acidity. A spiked “hard shake” is sweetened by something other than the usual suspects. A Negroni pops with earthy black olive. And the much-maligned Cosmopolitan gets attention and treatment like never before, as well as a description like you’ve probably never heard:

“How can we do an interesting version of a really popular serve? We put it on draft; it’s pulled through with nitrous. So it has this amazing texture to it. We keep it quite kind of clean on the vodka so you get a lot of that kind of cereal character coming through. We fold a little bay leaf through it, so it has this nice herbal accent. We use a blend of different acidities to keep it quite clean, so it stops it being really ‘plump,’ like a garish Cosmopolitan was. And then we use cranberry for that dry note. It’s really playful, really light and really fun one.” 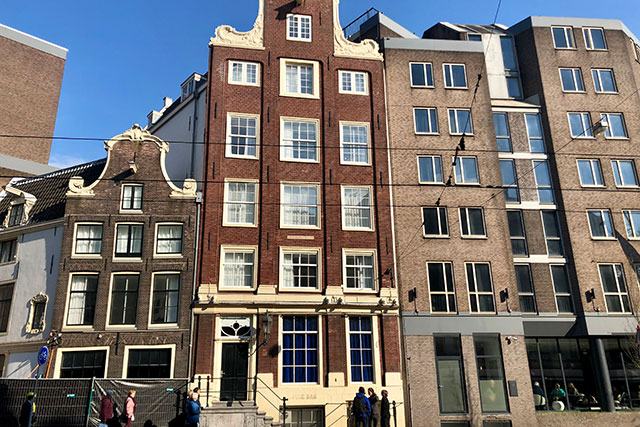 Visually, Super Lyan has been executed by renowned designer Jacu Strauss, creative director of Lore Studio, who also designed Dandelyan and Amsterdam’s Hotel Pulitzer. Of Strauss’ design concept, Chetiyawardana encapsulates it as“a nice juxtaposition between something historic and ancient and something kind of modern with a bit of playfulness to it.”

Still curtained off with pipe-and drape, Super Lyan’s garden-inspired anteroom was created by incorporating a formerly underutilized glassed-in pocket garden. Now protected by a glass skylight, the new space is bright and cheery no matter what the weather might be like outside. Here, at café tables or a central banquette, about 45 guests can enjoy a coffee and a house-made stroopwafle or vegan doughnut, a milkshake (spiked or not), or other shareable all-day bites while taking a meeting, seeking that elusive inbox zero, or waiting for check-in time.

Additional seating can be found in the window sills—now open to the hotel’s ground-floor hallway leading to Super Lyan’s garden—of the 17thcentury childhood home of Dutch poet and historian, P.C. Hooft, which has been incorporated into the De Witt property.

While Super Lyan takes its name and mission-critical playfulness from its cellar-dwelling Hoxton predecessor, this iteration has its own look and an expanded intention. At 5 p.m., the barroom opens to an additional 65 or so seats and keeps the courtyard’s cheeriness going with dreamy dark blue walls and a gleaming white bar reminiscent of a 1950s soda fountain, with tufted cherry-red stools. Guests can enter from the street or from the hotel. 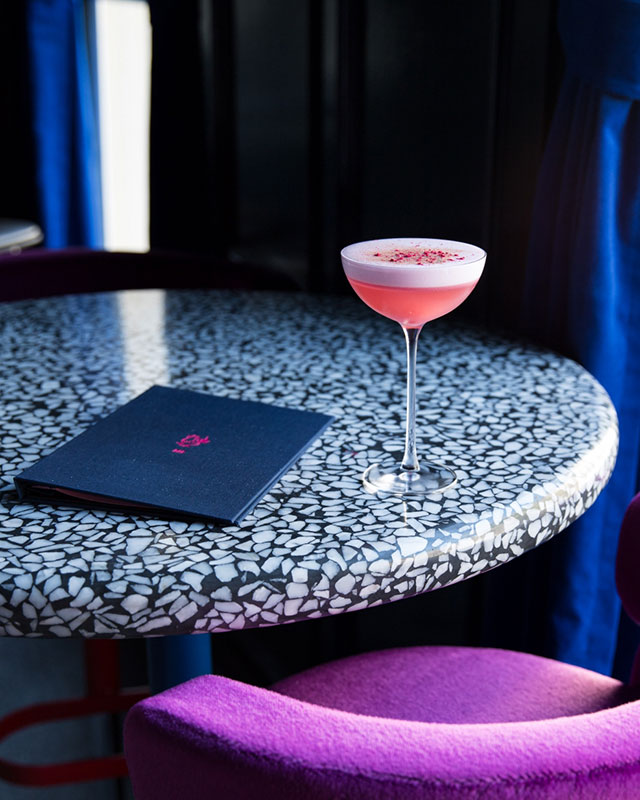 There’s not much Strauss can physically layer onto the painted paneling, however, as much of the historic place is “listed” for its ancient walls and stained glass. So lighting sconces will have to do much of the artistic work, as well as the pops of color and even a charming little 1950s bar installation, a found piece that can be tucked away or exhibited in the Living Room. But Super Lyan’s most memorable qualities won’t be embedded in kitsch or décor, but in how you fit into the space and how it fits into its location.

While the look and taste is all post-war optimism, the feel is hyper local in that Super Lyan aims to function similar to the Dutch concept of bruinecafés. Such “brown cafés” are the catchall meeting spot, the local, the neighborhood bar—that is, all-day, usually darker, older establishments that serve coffee, maybe some casual fare, beer and jenever. In Amsterdam, many are historic landmarks, such as Hoppe, which proudly dates back to 1670.

“I love the brown cafés because they are historically where people would gather,” Chetiyawardana says. “It was the very easy, very democratic meeting space for people. And that’s what we’re trying to channel here [with Super Lyan]. It is an all-day affair, designed to be really open and welcoming.”

Moreover, like many of the brown cafés in the city, Super Lyan will have its own cat.

“Those are really ancient bars. And what with serving food and having all those little nooks and crannies, they’d have a mouser. That’s probably one of my favorite inspired things of the city. Obviously not the mice part, but we wanted this to be about that neighborhood thing.”

Hypoallergenic Robin was “acquired” and promoted to Super Lyan’s official bar cat. At the time of our interview, , Robin was “down in HR,” (filling out his new-hire paperwork, I presume?), and will ostensibly live in the bar. As to his naming, back in London, Robin has a counterpart in Chetiyawardana’s first cat, Batman.

“Yeah, of course, it’s in the service and the product and the music. But the cat—it just makes it even better!” 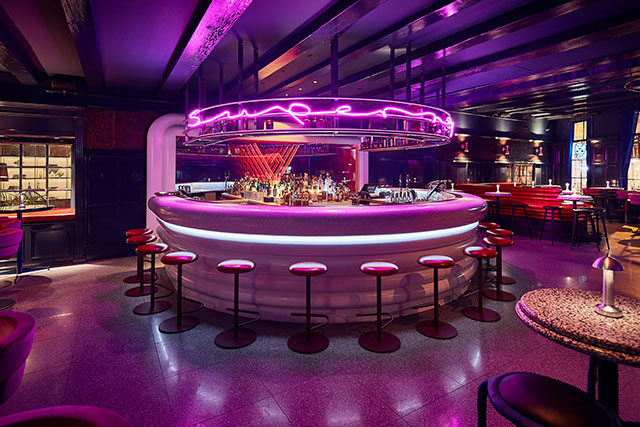 This playful, effervescent brand of conscious casual is perhaps the final frontier for the team that has already tackled such heavy issues as sustainability and waste-free bartending; delved into the impacts of various sweeteners on guest health; and has put out both a book and a line of pre-made signature cocktails. Quick on the heels of Super Lyan (which itself comes online right after Lyaness), Silver Lyan is yet another project in the pipeline, and will be the group’s first U.S. concept when it opens in November 2019 in Washington, D.C.

All this comes at a moment when society is becoming increasingly aware of selfcare as a choice. And, yes, even the indomitable Mr. Lyan is looking at his own habits with a critical eye. 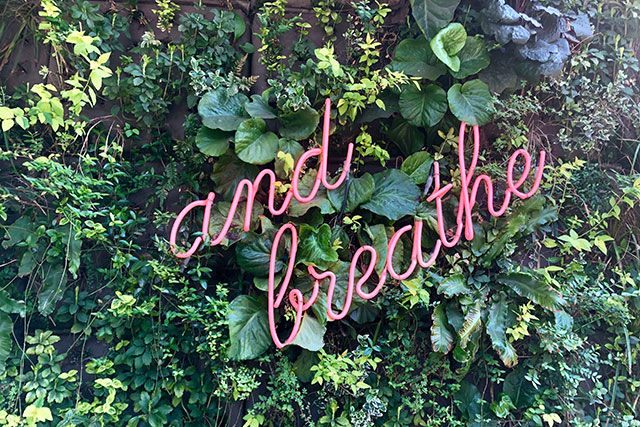 “I’m a bit of a morning and late-night person,” Chetiyawardana admits. He’s currently working on improving his sleep habits. “It used to be four hours. I’ve worked off four for about 20 years and I’m trying to creep it up a bit. So I’m hanging between five and six. It feels more forgiving.” Even the Lyan needs his rest.

There may be precious little of that tonight, however. Super Lyan Amsterdam opens each morning at 7 a.m.

Get Hoppy Up With These 6 Easter Cocktails In L.A.Features 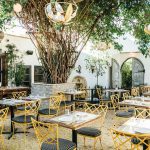 Where to Celebrate Easter in Los AngelesFeatures