It is the dreadful dead of winter in New York City, which means when the recent squalls hit, we turn to  cozy winter fashion and steamy cocktails. Nothing’s better on a blustery wind chilled day than a warm, spiked drink, whether you go for a classic like the hot toddy or hot buttered rum, or something a bit more adventurous.

While it may be almost unbearable to venture out into the bitter cold for a few drinks, head over to these bars and try their unique hot cocktails. We promise: it’ll be worth the journey. 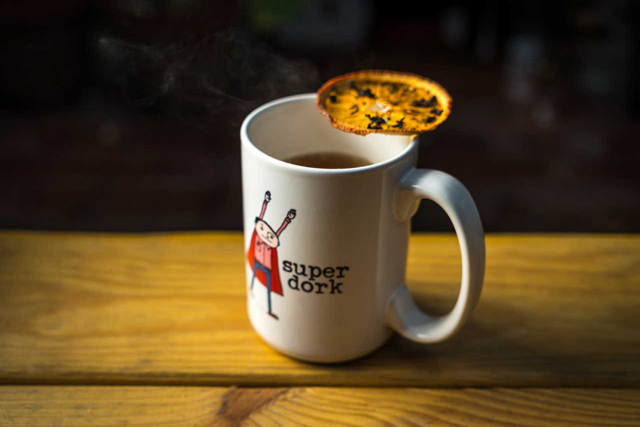 This classy cocktail is a mix of Gran Classico, Cynar 70 (a sweet, nutty Artichoke-based liqueur), saffron-tinged Strega, and tart Contratto Aperitif. “Amari” is Italian word for bitters, so expect a negroni-adjacent flavor profile at an elevated temperature. 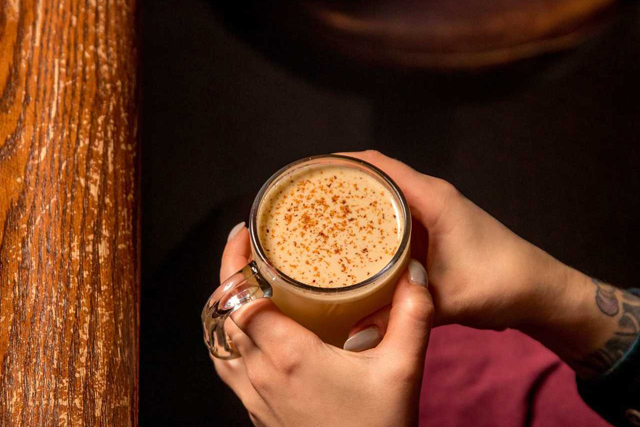 The Bear Trap is a spiked cider/hot buttered rum mash-up made with fresh apple cider, spiced butter and bourbon. The steamy winter favorite tastes like a liquid artisan Lifesaver. 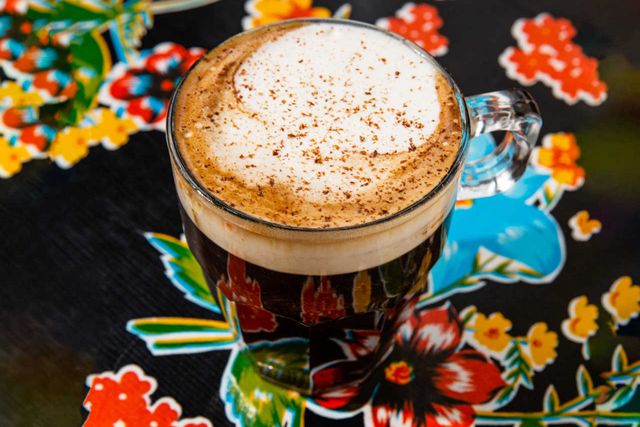 Fort Defiance’s Irish coffee is made with high proof whiskey, espresso, boiling water, and thick, rich, heavy cream. This is a full sensory experience: the hot, caffeinated concoction toasts your palate and the hand-shaken, cinnamon-dusted cream cools it down. 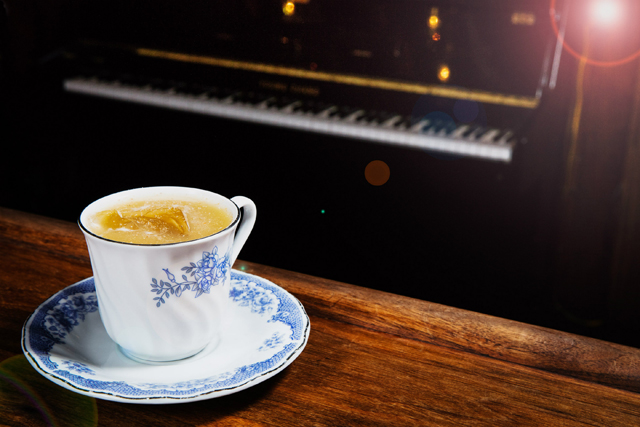 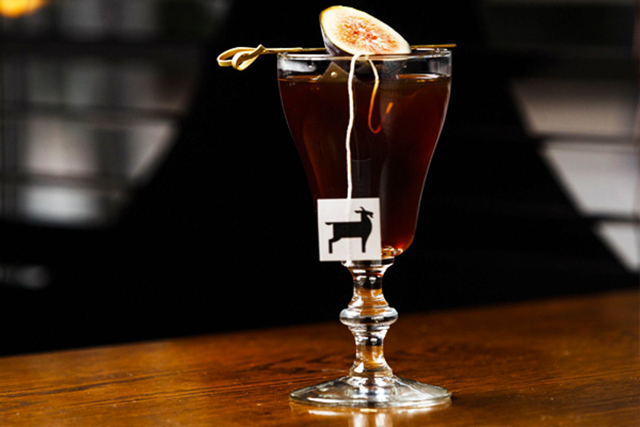 This Hot Fig Rum Punch created by Ryan Gavin, Bar Manager, Gran Tivoli & Peppi’s Cellar, has an old-school winter vibe that compliments the season. That was intentional. “I wanted to showcase the versatility of tropical flavors in how they combine well with the more traditional seasonal ingredients such as ginger and fig,” Gavin said. While he says that the punch is warming and wintry, he says the fruity notes from the rum and pineapple “evoke festivities of an exotic nature.” Damn right they do. 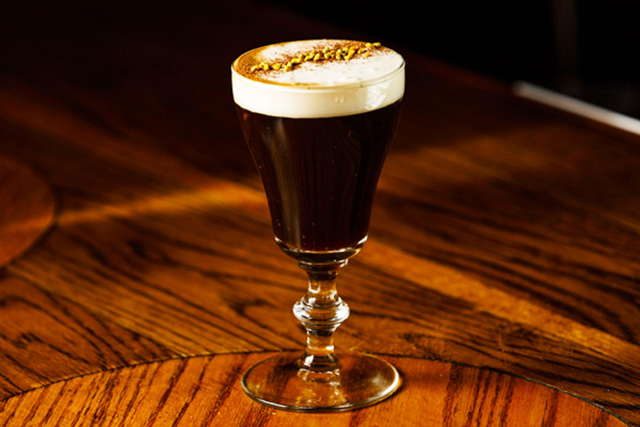 Gavin’s Coffee & Cream is a decadently delightful variation with a chilled sweet vanilla cream crown that floats on top of the drink. “We were aiming for some sort of elevated Irish coffee style of drink that would show off not just the delicious espresso but some nutty and rich notes from the brandy and Vin Santo,” Gavin says. “By adding the Mr. Black Coffee Liqueur, we were able to elevate the natural coffee flavor and bring the sweetness up to that magical point that is lip smacking, but not too syrupy.” 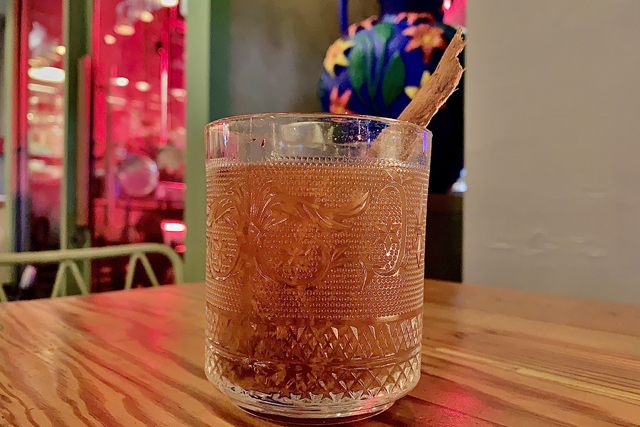 Marc Meyer and Vicki Freeman have come up with Rosie’s, a Mexican restaurant that swims upstream against the Tex-Mex current by offering fundamental regional Mexican fare. Predictably, the menu pushes shots of tequila and mezcal, of which there are dozens of varieties, however aside from the extensive agave list, Nate Seranno introduces on to the cocktail menu, a classic Apple cider cooked with clove, Mexican canela(cinnamon). Garnished with grated nutmeg and a cinnamon stick. Serrano recommends it with a reposado tequila (El Velo), a spicy rye (Ragtime Rye) or mezcal (El Silencio Espadin). 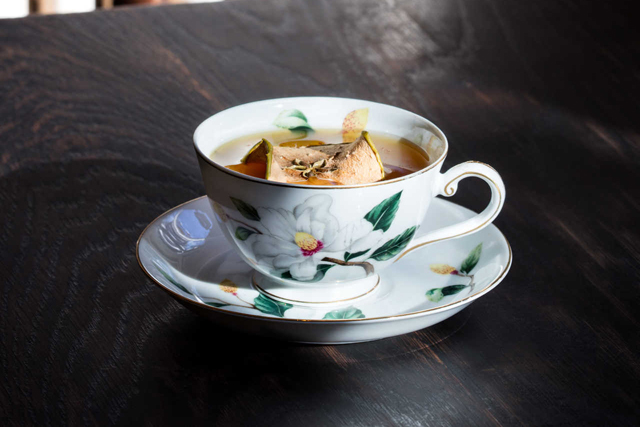 Pumpkin spice is fine, but hot apple cider is the season’s best fruity tipple. Dante amps up the cold weather staple by adding a kicky apple cider vinegar and calvados to its cider base to create wintry drink that you won’t be ashamed to sip in public. 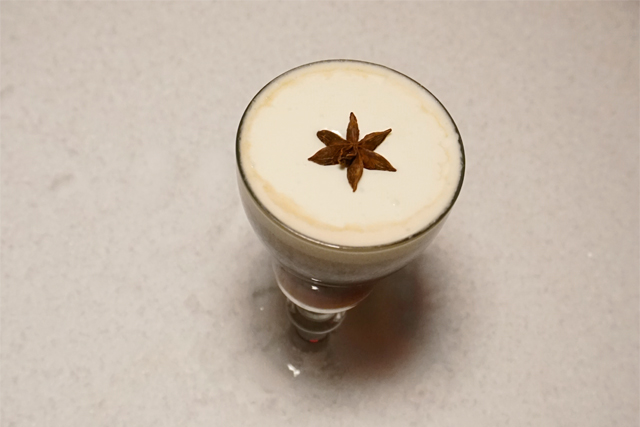 Just off Christopher Park, in the heart of the West Village, award-winning chefs Rita Sodi and Jody Williams in addition to Bar Manager Stacey Swenson, share the arte del bere at Bar Pisellino. While there is an entire Caldi menu, the Bianco Nero is their version of an Irish Coffee. The cocktail features Monkey Shoulder Scotch, Demerara syrup, coffee, and top it with their to die for Anisette Cream (heavy cream, Meletti Anisette, vanilla liqueur all whipped together), garnished with a star anise. 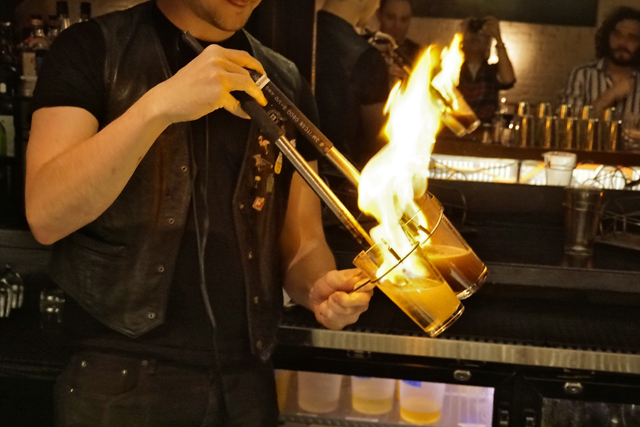 When Arnold started experimenting with his “red-hot poker” drinks that would eventually become one of his signatures at New York’s bygone Booker & Dax (and now at Existing Conditions in Greenwich Village), the intent was to create “variants on old-style drinks, the classics,” he says. That is, a base of brandy, applejack or cider, sugar, maybe some citrus and spice, heated to a high temperature with a poker plunged directly into the mixture much like colonial innkeepers once did. The results were drinks like his Wassail, a twist on one of the oldest templates of hot drinks, with a distinctly caramelized flavor. “We were doing very traditional ingredients you might actually hit with a red-hot poker, an actual loggerhead or flipdog, in the 18th and 19th century,” says Arnold. 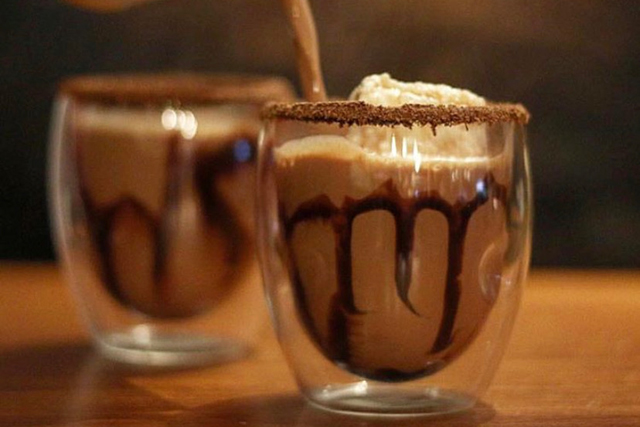 This little cafe’s limited bar turns out a delightfully decadent, deceptively simple, sweet hot drink. The French hot chocolate combines dense hot cocoa with port wine to rich, slightly buzzy effect. A cup is a dessert replacement rather than accompaniment for all but the most committed gourmands. 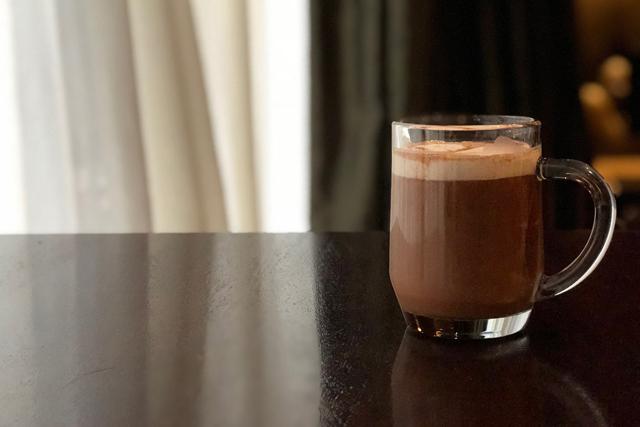 Ciampino, a boozy hot chocolate at The Nomad Bar in New York, made with fernet, green chartreuse and a dollop of Angostura cream. It’s decadent but not overdone, and the touch of fernet adds a tiny bit of seasonal spice. Not to mention The Nomad Bar is one of the coziest bars in the city, making this drink the perfect cocktail to warm your belly on a cold winter night after a long day of work in Manhattan

Sleep No More at Gallow Green 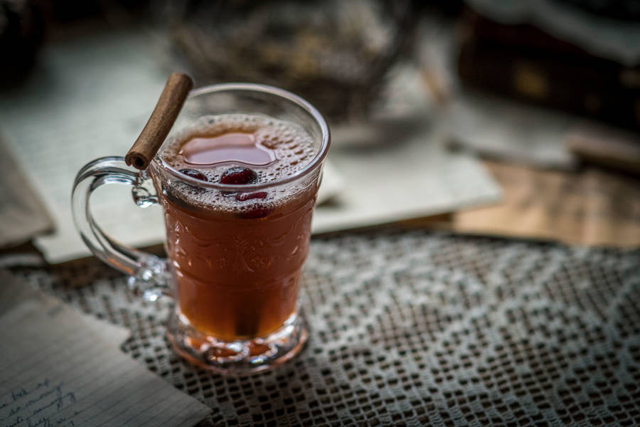 Year-round rooftop bars and hot cocktails are a formidable pair. Gallow Green, perched on the roof of the McKittrick Hotel, offers this herbal option. The drink is named for the venue’s immersive theater production and is just about as intense, incorporating bourbon, amaro and cider with dashes of fresh ginger, cinnamon and cranberries. 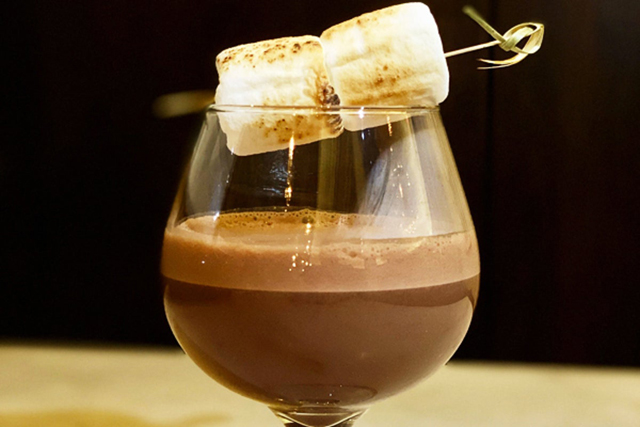 Boozy hot chocolate is a pretty unbeatable winter drink. This version is a lighter, spicier play. “The traditional Italian hot chocolate is usually a rich and indulgent treat that’s perfect for a cold day,” says Anthony Henriquez, Beverage Director at Lumaca in New York City. “But it might not be the best before or after a meal.” This version removes the heavier ingredients and the allspice. The remaining cinnamon and chili flavors blend well with the caramel notes of tequila (they use Chamucos). Topped off with some freshly roasted marshmallows, it’s enough to make you forget about the cold for a few minutes. 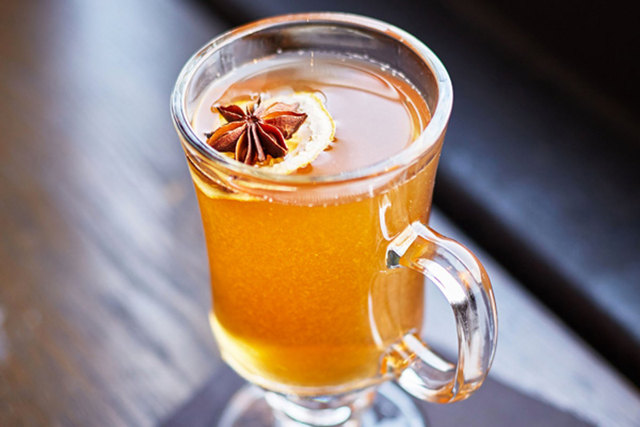 Amir Babayoff, head bartender at Ophelia in New York City, starts with the rich and layered Barrell Craft Spirits Bourbon and adds a touch of French fortified wine for added complexity. Next, some Pineau des Charentes is brought in to bring out the softer part of the drink thanks to notes of peaches, prunes, plums and toasted nuts. Next comes caffeine-free orange and ginger tea. He adds Panella (unrefined sugar cane) with a blend of five winter spices (cinnamon, cloves, allspice, nutmeg, cardamom to finish it with a sweet complexity. 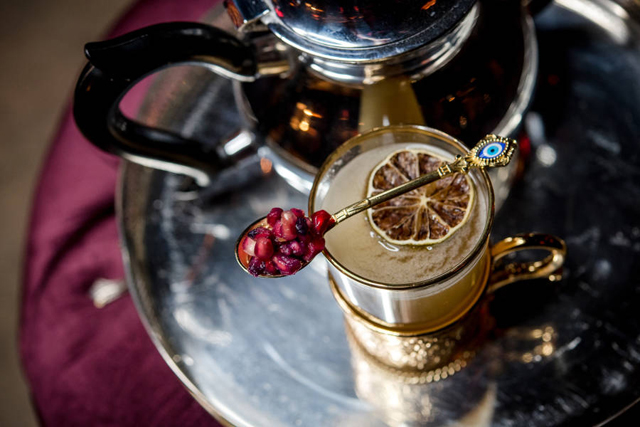 Served in a posh, gold-rimmed glass mug (in a speakeasy-style bar inside a converted clothing factory), the piping hot Tunisian is not your average toddy. It’s crafted with Moroccan spice, lime and mint tea to diversify its flavor profile, plus a one-two punch of bourbon and rye. 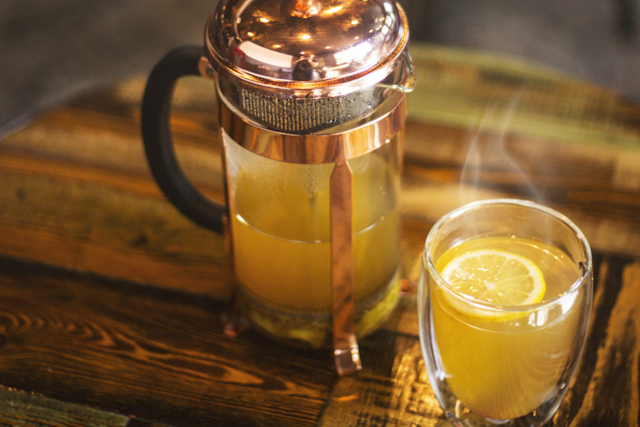 Croton’s French Press Hot Toddy will take the chill out of guests looking for a warm, flavorful cocktail. Guests press bourbon with fragrant cloves, allspice, honey syrup, and orange and lemon peels with warm water “Croton is known for our well-crafted, classic cocktails and the French Press Hot Toddy is our take on a winter favorite,” said bar director Rodrigo Escobal. “Presenting it in a French Press engages the customer, and they get the added experience of smelling the aromatic spices as the drink comes together.” 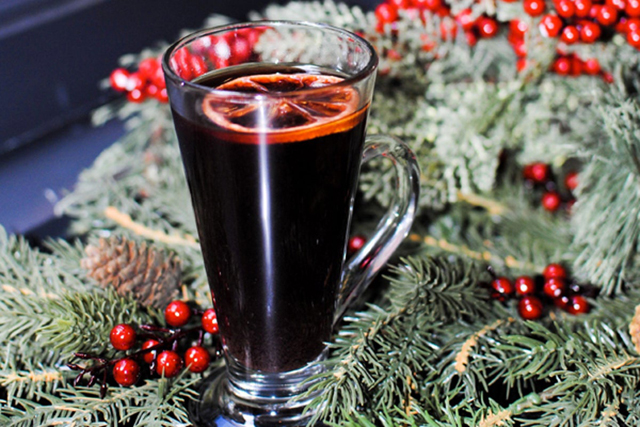 Mulled wine is a classic winter warmer. This one is fortified with a bit of brandy for an extra kick. “I believe that the Mulled wine we make at Valerie just hits the mark for the season,” says Marshall Minaya, Beverage Director for Valerie in New York City. “With a little fresh ginger, honey bonded Apple Brandy, and the constant temperature it is what we want to serve you to warm you up.” 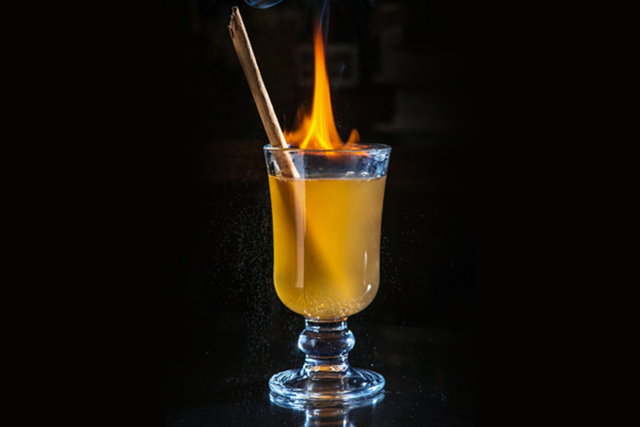 This piano bar’s spiced rum toddy is a hot tropical drink that will help cure your winter blues. That Caribbean flavor comes from the demerara syrup, a sweetener that gives rum-based drinks that caramel flavor and color. An added slice of fresh ginger gives this one a refreshing jolt that might make you quit whiskey-based hot toddies cold turkey.

Spiced Cinnamon Cider at Tavern on the Green 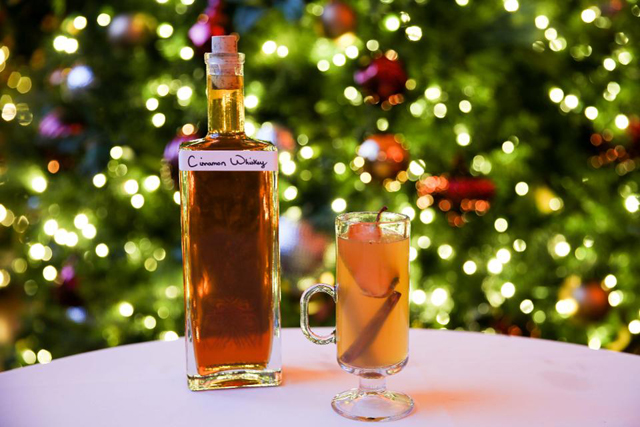 This drink is made with warm apple cider and house-made cinnamon whiskey. “To add some extra warmth to our hot cocktail, we infuse our whiskey in-house with cinnamon, cloves and nutmeg to bring a perfectly balanced spice to the cider,” said Jordan Tannenbaum, beverage director at Tavern on the Green in New York City’s Central Park. “Winter in New York can get cold, but our Spiced Cinnamon Cider is the perfect cocktail to warm up with after a chilly day in the park.” 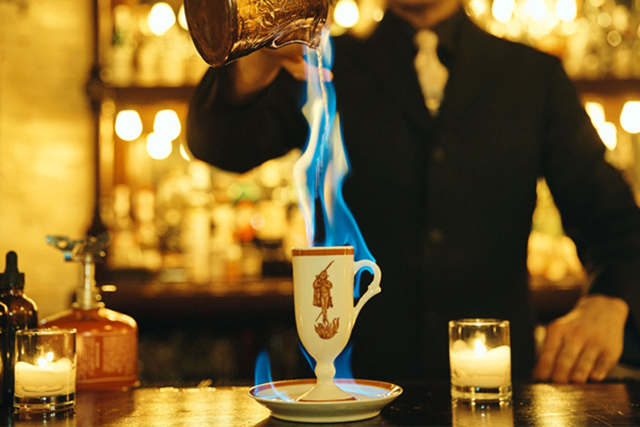 At this new, Uptown cocktail bar, NR comes from the team behind Harlem’s ROKC. Here, expect cocktails in exquisite glassware and lets not forget some serious entertainment. While you can only order the Nightcap after 9pm, it is worth the wait.  “When creating this cocktail, we knew we wanted to include absinthe but wanted to experiment with chartreuse since it’s high-proof and knew it would add a very rich, floral flavor” says NR bar owner, Shigefumi Kabashima. “We heat an iron rod over a flame to mix the cocktail with in order to cut the edge of the chartreuse and burn off some of the alcohol.” The drink also has butter, which caramelizes and adds to the cocktail’s rich flavor. 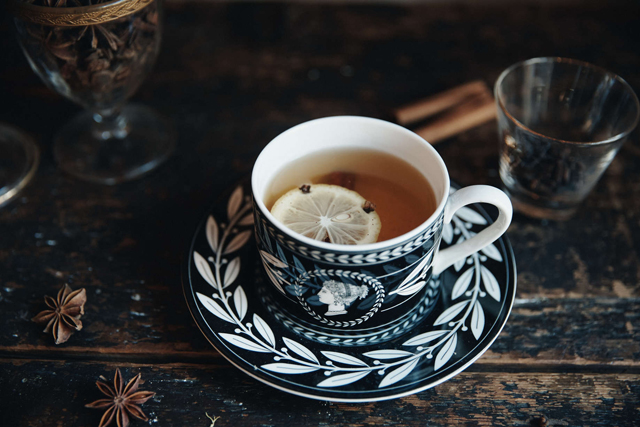 Warm your soul to the very core with a steamy bowl of ramen and a Japanese take on the ubiquitous Hot Toddy. This version includes Japanese whisky, said to be silkier than that from other parts of the world. Hot water, honey and yuzu — a fragrant citrus that resembles a lemon and tastes like a grapefruit-mandarin-orange-hybrid — complete the cocktail.

Hot Thotty at The Honeywell 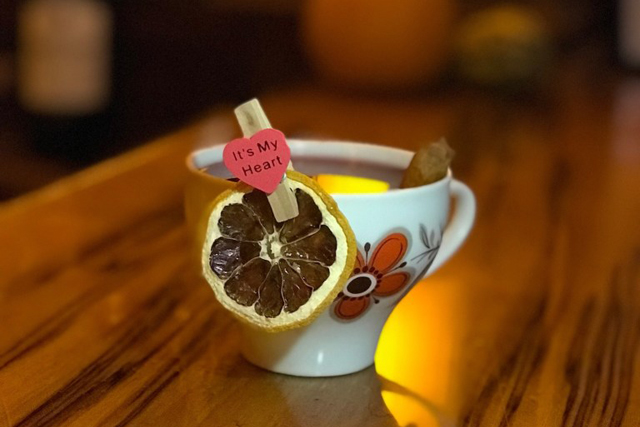 Stepping into this subterranean cocktail lounge instantly transports you back to your parents’ heyday: tiny mounted televisions flickering hits from the ’70s, sky-high cheeseballs that I’m convinced are made with artisanal Cheez Whiz, and libations served in—what else?—lava lamps. The Honeywell’s sexier hot toddy, though, will have you sweating under your collar. Served out of a demure teakettle, the honey bush–infused Buffalo Trace is a lusty hibiscus shade and gets extra lip-smacking with two types of lemon (fresh and dehydrated). 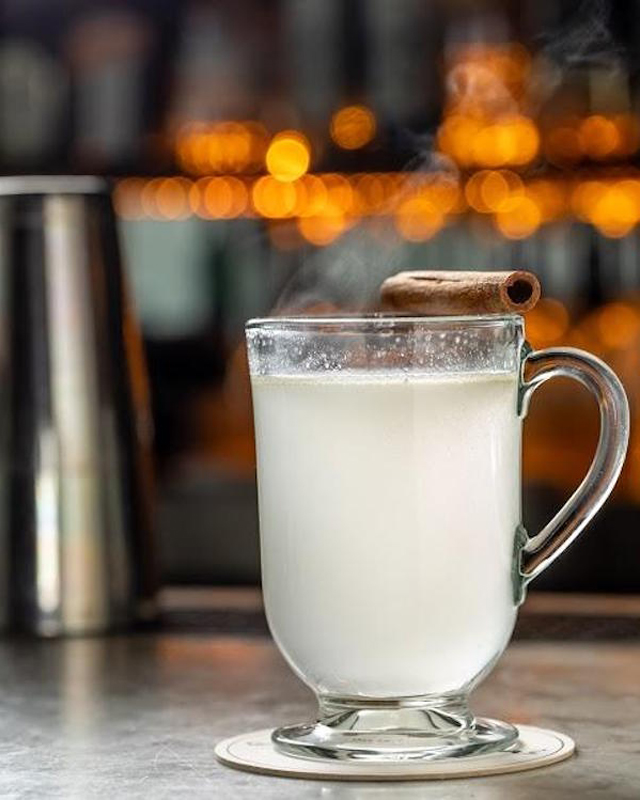 Antica Pesa’s fall-inspired Il Burro Ubriaco mingles the flavors of butter-infused cachaça and Frangelico with cinnamon syrup. The Ubriaco is garnished with a festive cinnamon stick. 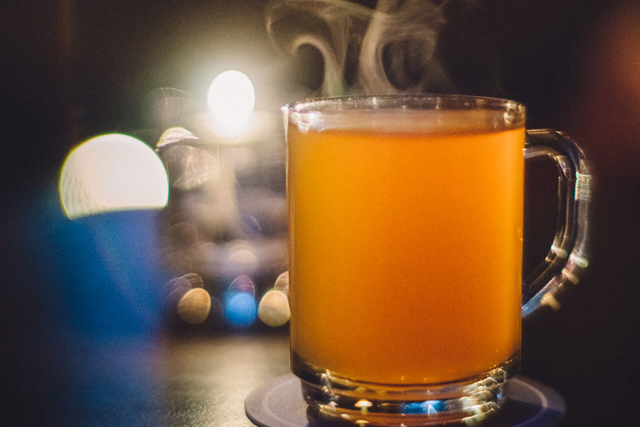 Ushering a taste of fall foliage to Brooklyn’s Williamsburg, Silver Light Tavern’s Hudson Hot Cider is fashioned with locally made apple cider that hails from Upstate New York, joined by fall spices and Power’s Irish Whiskey. The cocktail is topped with a cinnamon stick. 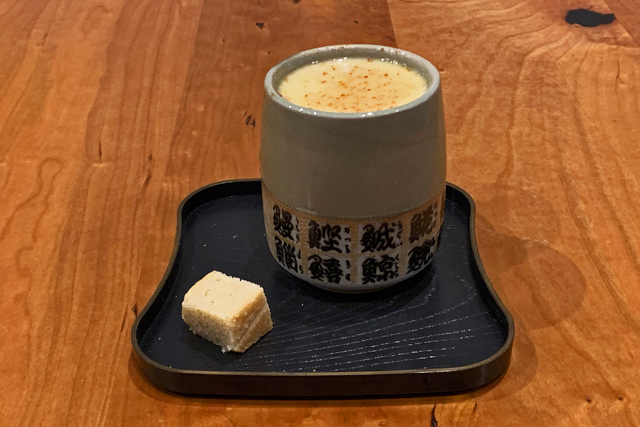 Sama Street in North Greenpoint highlights and showcases Asian ingredients in a thoughtful way. They use classic cocktails as a base, a classic formula with new flavors, and some unexpected concoctions. Sama Street’s unique take on a Hot Toddy leads you to question, is it a hot cider or a hot toddy? In the case of Sama Street’s Toddy, it’s both. The addition of yuzu and 5-spice apple syrup to Japanese whiskey makes this the perfect winter boozy companion.

Spiced Hot Toddy at The Shanty 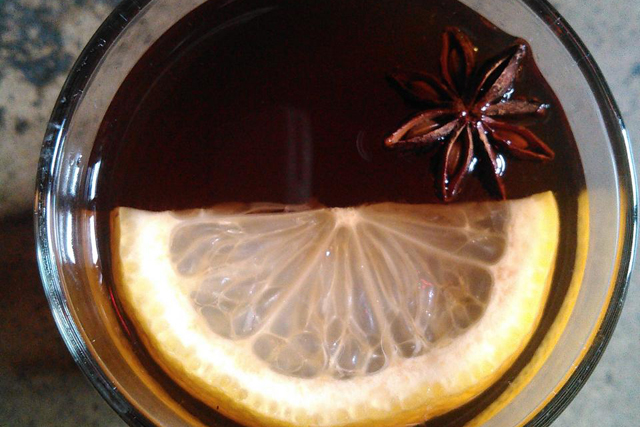 “Autumn and the holiday season are my favorite times of year – the smells, the flavors, the festivities. I love to make hot drinks for my family and friends during this time and I think our Spiced Hot Toddy is the ideal drink to warm you up. I like to use New York Distilling Company’s Applejack Finished Ragtime Rye, an allspice dram and some cinnamon to put a twist on the classic hot toddy. The Applejack finish is very versatile, with a slight hint of apple that compliments the cinnamon flavor perfectly,” said Marissa Mazzotta, bar manager at The Shanty in Brooklyn, New York.

20 Spots To Watch The Super Bowl In L.A.Features