Vibe is a weird thing to think about. How can you measure it? How can you describe it? What more is it than a particular frequency, a specific hum, a vibration underpinning the rhythm, buzz, and environment of a place. True vibes are unique, singular to the place and time and perhaps the company kept. Vibe can be created, but not manufactured. It can be intentional, but not forced. It can be begotten, not made (too far?) And if a bar prides itself on the vibe it crafts, it better do a damn good job.

Playa Betty’s does a damn good job. They are self-described as a “road trip down the California coastline”, which is a lofty expectation to fulfill, especially when your patrons are city-bound Manhattanites whose closest beach is that spit of sand just under the Brooklyn Bridge. Immediately, however, the high ceilings, the twinkle lights, a little bit of well-placed neon, and the energized tunes from Alabama Shakes or Van Morrison will have you thinking a bit about the last time you were hanging ten.

Surfboards hung on the walls, retro movie posters decorating one wall, and a bright orange neon declaration to “eat tacos!” provide a sense of sundrenched excitement, of that cooling feeling when the sun begins to dip below the water. That raw energy is tamed by sets of white and brown tables, white and green chairs decorated with a flowery pattern, a shelf of tall green grass, and twinkle lights above the bar, which, when the lights dim, could very well be lighting some sort of backyard party under the boardwalk somewhere. And above all (literally) is the ceiling, an ocean of uneven blue waves, as random and as perfect as high-tide.

The vibe, then, is all around you, as well as on the table in front of you. Playa Betty’s is known for their tacos, little custom creations filled with fish or cilantro or jalapeno or jerk chicken, though the queso and guacamole are superb as well. There’s something easy and fun about tacos. Maybe it’s the portability, maybe the customization, maybe the combination of flavors and colors all wrapped up in a (usually) neat package. Maybe it’s all those things but, again, this all rolls (taco pun definitely intended) into the cohesive vibe of that carefree California cruise.

Owners Tom and Gene have literally poured the same care and attention they’ve given the walls, tables, decor and food into their collection of cocktails. The menu ranges from margaritas to spicy old-fashioneds, and each drink stands alone. Or, to put it in thematic terms, they can ride their own wave.

There are the margaritas, frozen or on the rocks. Standard or special, such as the Frozen Paloma, a pink icy mix of tequila and grapefruit that looks particularly good against white tables and green windowsills. The margarita begins with a kick, thanks to the peppercorn, but melts and mellows out into a flavorful drink that, I admit gave me a bit of a brain freeze. That might not sound like a compliment, but after a hot day on a California beach, that just hits the spot. 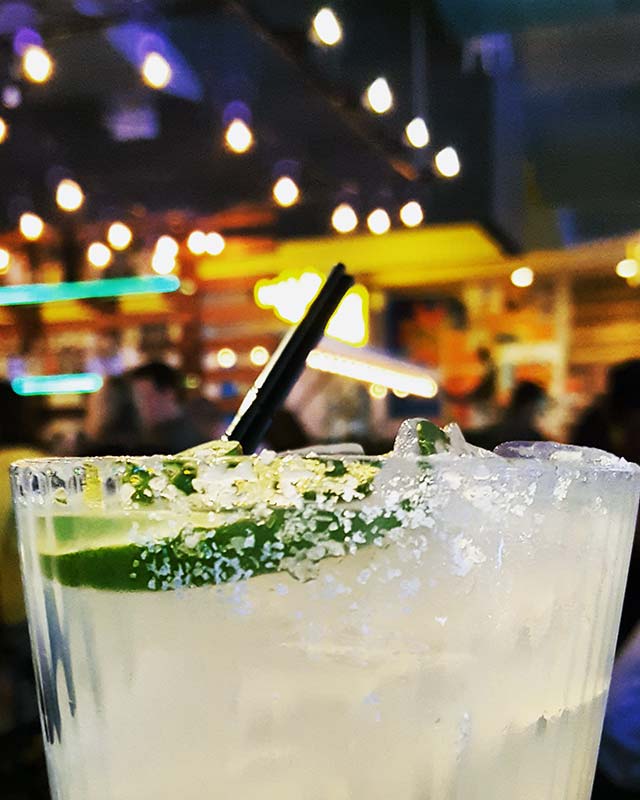 Other margs are concoctions of jalapeno, aperol, lime, and, of course, salt. The Betty’s Margarita is an excellent rendition of the traditional, and the Holla Pain Yo! (say it out loud) shows how heat can actually be refreshing. But, Playa Betty’s doesn’t stop at tequila; they’ve got a library of other custom cocktails, all of which are as topical and tropical as the margs themselves.

To wit, the Spicy Old-Fashioned. I’m usually a bit mistrustful of any “[insert adjective here] old-fashioned” (call me conservative), but Playa Betty’s had earned its credibility, and proved it once again with a drink that has the citrus, the sugar, and the power of a traditional old-fashioned, and the kick of a lower California cocktail. 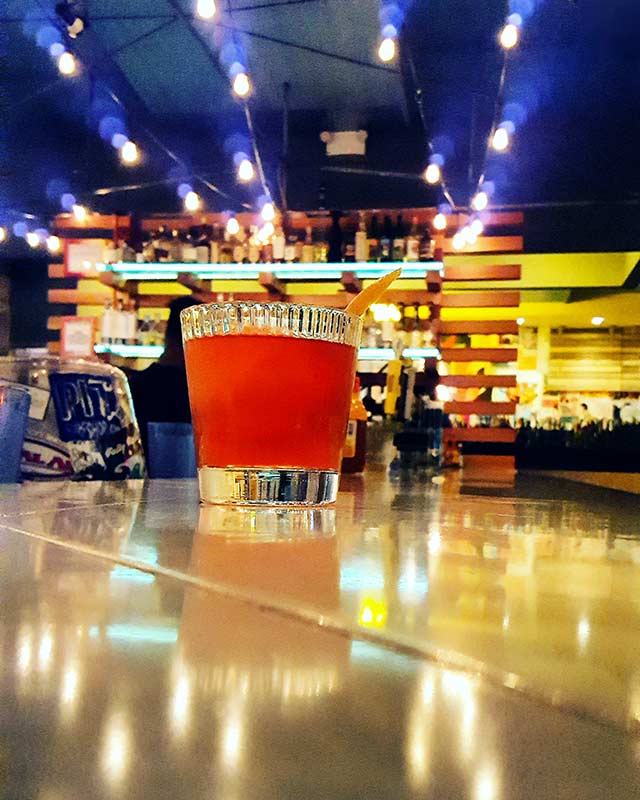 Other drinks, like the creamy anejo and coconut Coppertone, are clever and tasty. But, the best, the one drink that can surf the tallest waves, that can play the best songs with a guitar on the beach, that would be ideal running slo-mo in a Baywatch opening theme, is the Blue Wipe Out, a tall gin-based drink that is as blue as seawater ought to be thanks to the Curacao within. Topping it is a Harvey Wallbanger foam, and hanging on for dear life, as if the swell is about to crash over his head, is a small surfer dude, a little toy that remarkably resembled my own inner John Chamberlain trying to make it through life without wiping out too bad. But, as high tide turns to low tide (that is to say, the drink was consumed, the foam melted away) I was left with a rather peaceful seascape and a little blue plastic friend for life. If that’s not a metaphor for surfing, I really don’t know what is. 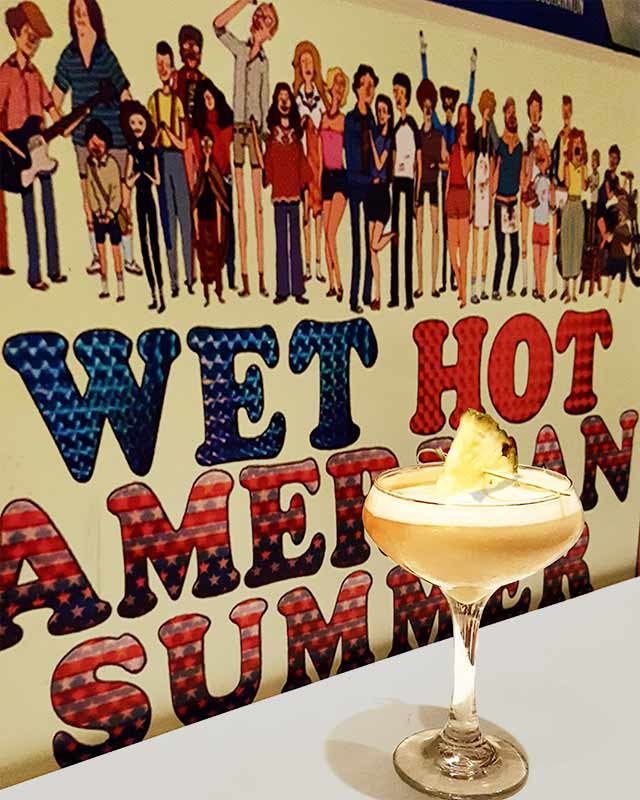 And, in the end, I really don’t. Because I’m just a city-bound Manhattanite whose closest beach is a spit of sand on the East River. This city may be an island, but island life is hard to find. For a few hours, however, I felt that I’d found it. Summer enveloped me, the sun soaked me, the salt coated me. I lived the California beach life, or at least felt I had. And that’s just the vibe of Playa Betty’s.

Barstool Review margarita Old Fashioned Paloma Tacos UWS
Tacos & Cocktails at Playa Betty’s Upper West Side2016-06-202016-08-23https://thirstymag.com/wp-content/uploads/2016/04/thirsty-nyc-logo-1.pngthirsty.https://thirstymag.com/wp-content/uploads/2016/06/playa-bettys-upper-west-side.jpg200px200px
About
John Chamberlain
John Chamberlain has done a lot of walking, and by walking he means bar crawling. As an aspiring bar owner, he can't think of a better place for research than New York City. If you see him reading a book at the bar, feel free to interrupt. Follow his IG-worthy adventures @thebartographer. 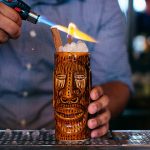 5 Fiery Cocktails to Spice Up Your SummerFeatures 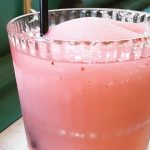