Lady Hay Drummond-Hay (born Grace Marguerite Lethbridge, 12 September 1895 – 12 February 1946) was a British journalist who was the first woman to travel around the world by air, in a Zeppelin. Although she was not an aviator herself at first, she certainly contributed to its glamour and the general knowledge about her aerial adventures by writing articles about it in mainstream US newspapers in the late-1920s and early-1930s.

This cocktail is properly named after Drummond-Hay with Hendrick’s Gin bringing the dirigible that was painted to look like a Flying Cucumber to NYC to celebrate national Cucumber Day.

Combine all ingredients over ice and stir to chill.

If riding Hendrick’s Air, strain the mixture into a flask, and enjoy your cocktail at an altitude of approximately 500 feet. 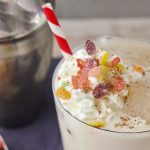 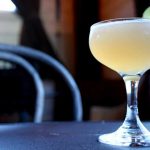