Playing is one of the things thirsty does best. In this case, we had the to catch up with former Yankee’s player Tino Martinez on a game day at Yankee Stadium and have some fun. For those who want to venture into sports betting, they can rely on the information found on resources like the Babu88 Review.

Tino is a Yankee at heart, clean shaven saying all of the right things with smiles and handshakes for all. Boasting 16-year career in the MLB, if there was one thing to take away from someone with this kind of longevity is was not work hard play hard, it was play right, when it won’t affect your game.

This is not to say that Tino doesn’t know how to have a good time. He was behind the bar with the Seamstress owner Pam Wiznitzer pouring drinks with Pepsi 1893 Cola at the recent debut of the 1893 Club at Yankees Stadium. This new line of colas does offer a welcome differential to standard flavor, with various flavor twists throughout the soda line it can make a rum and cola taste non-generic.

We had the chance to talk to talk to Tino about life in the MLB, going out in Boston with members of the rival Red Sox, and drinking as a professional athlete. A gentleman never tells the down and dirty, and while Tino wouldn’t divulge anything too scandalous (a gentleman never does) he was a good sport and gave a real inside look at having fun like a pro when you literally are one.

It was a perfect night for a game and the launch of the new 1893 Lounge, named after the new line of soda. The space is enclosed and has massive windows looking out straight to home plate from center field. There are vintage style posters that act as covers for lighting in the ceiling with comfortable seating closer to the windows/field and high-tops behind that. There are two bars on opposite sides of the room. It’s comfortable spacious and out of the elements.

For this occasion, Pam Wiznitzer created Cracker Jack-infused bourbon and a slew of other delicious cocktails (see full recipes below, after interview). Now, without further ado, let’s go…

What is your favorite drinking exploit from your time in Major League Baseball?

There is nothing better than having a drink after you win the world series. Whether it’s champagne, vodka, or some kind of whiskey it just tastes that much better because of the world championship you just won.

Absolutely. Everything tastes better when you win.

Was there a guy on the team that was always the boozehound that tried to get everybody taking shots and such?

No, not really. We would go out and have a few beers or some wine but we played every day, so if we did shots and stuff it would affect your game. You didn’t want to come to the ballpark with a headache. It would happen every now and then, but you wanted to monitor the drinking. 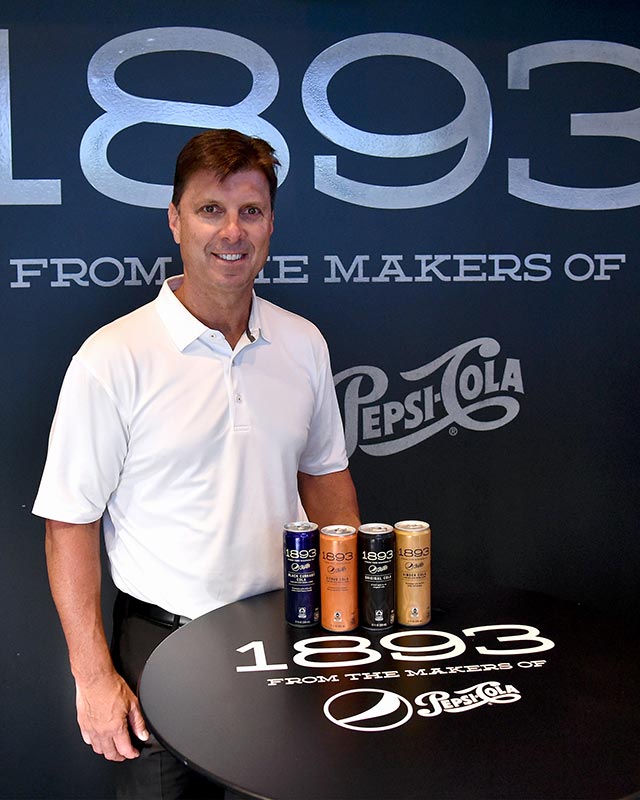 That moderation probably gave you the 16 year career versus a 3 year career.

So if you were to have one of those bigger nights out is there some kind of hangover cure that you would suggest?

I don’t think so, no. Even these days now if I go out with my wife or do whatever at home I just have some Gatorade by the bed and try to hydrate. I re-hydrate the best I can and I suggest also mixing in a couple waters in the same night you’re out.

So after traveling the country and being in all of the different cities for games, is there a hidden gem that you would suggest somebody go and see?

Gosh, that’s a tough question. I can’t think of specific bar names now, but there are some great whole in the wall bars in Boston. There’s some great bars in Seatlle and Chicago as well. There are a lot of great holes in the wall bars open late, and when I say open late I mean that our games wouldn’t get out until late so we wouldn’t get out of our hotel until around midnight so cities that are open later are where we would usually go out.

I remember when I was in Boston a lot of pro ball players went out to Daisy Buchanan’s? (ed.note: the bar is now closed)

Hahaha, yeah we used to go to Daisy Buchanan’s quite a bit. It seemed like every time we went there was always New England sports stars, whether it be a football player or a Celtic and we always had a great time because the fans. The real fans, were there and they had the ability to have a drink with us. It was very close to our hotel so it wasn’t bad getting back from.

So off the field, the Yankee’s and the Red Sox did get along?

Yes, when you’re off the field. Once you take the field, you want to win.

Is there anything you did or are currently to doing stay fit since that is a constant requirement?

I try to work out about 3 to 4 times a week and run a couple of miles and lift weights 2 to 3 times a week. So I don’t go very hard, I just do what I want to maintain a certain weight and so the I can enjoy a good bottle of wine and steak or eat whatever I want to eat those days. That’s what it all about, maintaining.

You’ve got to reward yourself every now and again.

So what are you currently up to these days?

I live in Tampa Florida, I was born and raised there, and I’m still fortunate enough to be working for the New York Yankee’s. I help out in Player Development. Gary Denbo is in charge of that, it involves our minor league system and all of our affiliates. I go around from time to time and work with our top prospects giving them encouragement and keeping them going. I also work with the marketing department here as well so I really appreciate them giving me these opportunities and it’s a lot of fun. 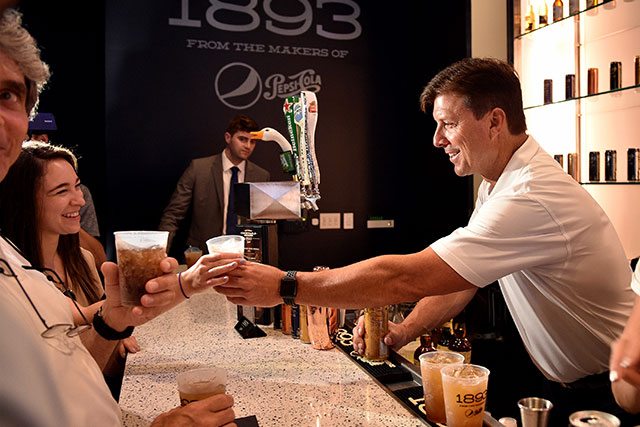 Any words of wisdom you would give to somebody that is trying to have fun but also work hard?

Yeah, you have to know when to monitor yourself. There are days when you can go out and have a little more fun than others, like if you have a day off the next day. But in baseball and in a lot of other sports I would say you have to have a good time. I’m not saying have great time (like partying non-stop) but just try to pace yourself and make sure you are ready to play ball the next day.

Water (he says this with a smile)

If you are going to drink alcohol?

It was a perfect night for a game and while Pepsi not only sponsored this event, they sponsor the 1893 Lounge, obviously named after the new line of soda. The space is enclosed and has massive windows looking out straight to home plate from center field. There are vintage style posters that act as covers for lighting in the ceiling with comfortable seating closer to the windows/field and high-tops behind that. There are two bars on opposite sides of the room. It’s comfortable spacious and out of the elements.

For this occasion, Pam Wiznitzer created Cracker Jack-infused bourbon and a slew of other delicious cocktails.

Check out the recipes below. 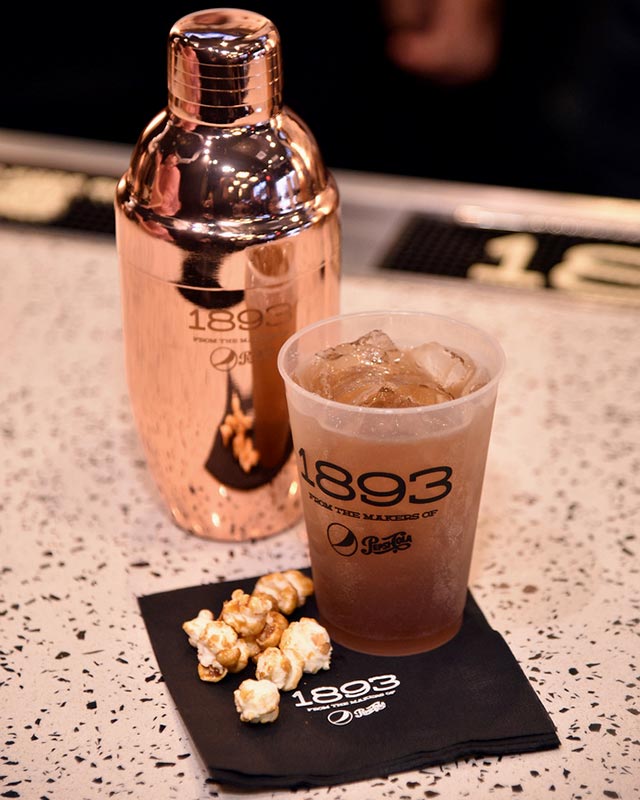 Let’s Have A Tiki 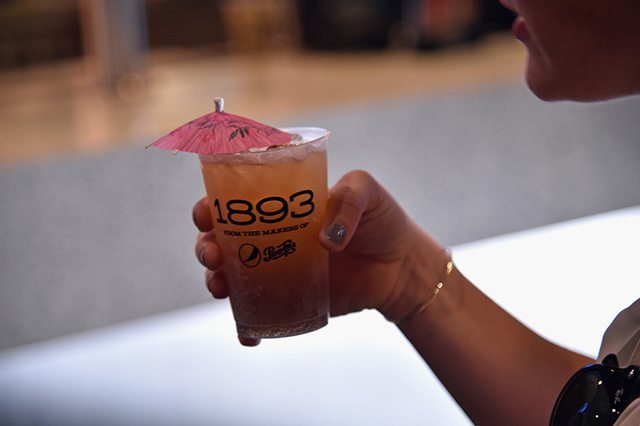 Directions: Shake all ingredients except the cola in a shaking tin. Pour over crushed ice and top with 1893 Ginger Cola.

Photo Credit: Photo by Bryan Bedder/Getty Images for 1893 From The Makers Of Pepsi-Cola

Interview Yankee Stadium Yankees
Red Wine, the World Series and Pepsi 1893: Tino Martinez2017-06-262022-03-30https://thirstymag.com/wp-content/uploads/2016/04/thirsty-nyc-logo-1.pngthirsty.https://d2rf0detuhmti.cloudfront.net/wp-content/uploads/2017/06/yankee-stadium-tino-martinez-pamela-wiznitzer.jpg200px200px
About
Todd Strickman
Todd Strickman is a NYC area native who has always enjoyed a good night out on the town. After many years of sales, marketing, and partying he applied to a job at an editorial assistant role at a lifestyle publication with very few writing samples. Todd started writing down his highlights from nightlife and putting them into his own website, The Brim. Today Todd enjoys working with the Thirsty team covering highlights around the NYC nightlife arena. 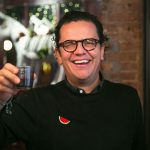 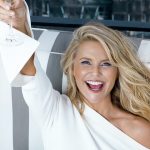 Mezcal and Bar Jokes: Drinking with Christie BrinkleyDrinking With