Just in time for the busy season, there is a new cocktail spot in Miami Beach. Opened by seasoned bartender Danilo “Dacha” Bozovic – recently named one of the best ten bartenders in Miami – along with partners Jesus Perez, Milos Velickovic, Jason Tune, Strahinja Marjanovic and Nikola Dragojevic Swizzle Rum Bar & Drinkery is a welcome addition to the exciting craft cocktail scene exploding all around the Magic City.

The new Miami Beach cocktail hotspot and rum destination is an intimate and sophisticated craft cocktail bar with a selection of more than 150 rums, a New York City meets Miami vibe and drinks that will appeal to both the casual consumer and the cocktail connoisseur. Swizzle Rum Bar & Drinkery will soon give imbibers the opportunity to learn more about their rum preferences with special local rum tastings, each composed of a selection of four Florida Rums with an introduction to their history and taste profile. These tastings hope allow rum lovers or just curious traveler a fresh insight on Florida’s Rums. The bar will also host guest lectures, classes, and demonstrations that will be available to the public

“Our goal at Swizzle is to create a world class presence mixing rum culture with a classic and traditional style of bartending,” says Bozovic, also the author of Barkeep. “We aim to offer the best hospitality and bar experience to our guests from the moment they walk in the door and are greeted with a glass of our welcome Rum Manhattan.” 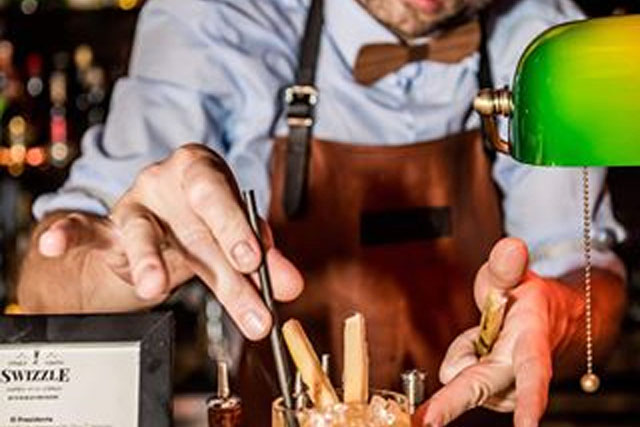 In addition to the 24 seats inside the intimate bar space, and 30 seats in the neighboring lounge, Swizzle will also have an outdoor patio area by the pool with 30 more seats. The decor will include a signature mural and walls lined with photos highlighting the history of rum. These photos are meant to add a museum-like vibe to the halls where when a bartender isn’t too busy behind the bar, they will offer walk-through tours as a chance to explain the history and the meaning behind the photos.

The pool patio will be open until midnight, while the cozy indoor bar will be open until 5 a.m. daily. The carefully curated playlist, played on a gramophone, will give Swizzle Rum Bar and Drinkery a classic feel and will help set the tone with its old school throwbacks to be heard throughout both spaces encouraging a fun and casual come-as-you-are setting.

The menu at Swizzle Rum Bar & Drinkery will include a versatile cocktail list, with a large focus on classic and contemporary cocktails, as well as a mix of spirit-forward cocktails and refreshing tropical drinks. Scotch lovers can opt for the Newburgh Sour made with Glenlivet Founders Reserve Single Malt Scotch, black tea-infused Amaro Montenegro shaken with fresh lemon juice, Demerara syrup, raw egg white and dashes of old fashioned bitters. Those who are interested in rum will love the Hurricane made with Diplomatico Planas, Mount Gy Black Barrel, Dark Chocolate Rum Bar Overproof Jamaican Rum.

Another anticipated favorite cocktail will be the Madame Hong, originally served at Macao Trading Co. under the watchful eye of Bozovic during his tenure as bar manager at that New York City drinks destination. It’s meant to invoke feelings of the beginning of spring. It’s served in a champagne flute and with bitter notes due to its use of Campari. “The aim of Madame Hong is to mark an end to the winter and slow transition into the warmer days, even though Miami doesn’t often feel that change, it’s fun to have cocktails that can help guests imagine a change in season,” says Bozovic. “The Campari works perfectly with strawberries and lemon juice. It’s brought to life with a bit of bubbly and a small touch of Peychaud’s Bitters.”

Happy hour will be available every day from 7 to 10 p.m. featuring specialty cocktails such as a Classic Mojito, a coffee-infused dark rum Banana Daiquiri, and the vodka, fresh pineapple, and mint based Missionary Downfall. Weekly themed activations like Tiki Monday, Rum Smuggler Tuesday, and Prohibition Thursday will offer themed menus and special pricing.

A bevy of bar bites will also be available to help soak up the cocktails. Twists on Miami favorites like Serbian steak croquettes filled with pork steak rolled up and coated in kajmak and paprika with Ajvar Serbian vegetable spread served on the side. Cuban sandwiches and Jamaican jerk chicken wings promise to add a bit of flavor and flair to the menu.

Which Country Has the Most Michelin Star Restaurants – And What Drinks do They Serve?Features