The Best Establishments to Get Afternoon Tea and Champagne in London

A trip to London wouldn’t be complete without having some afternoon tea. While Brits have enjoyed tea since the 17th century, this quintessential British tradition actually began two centuries later. Anna Maria Russell, the 7th Duchess of Bedford and Queen Victoria’s Lady of the Bedchamber, wasn’t a fan of the late dinner schedule that was the norm back then. Thus, the duchess decided that eating a light afternoon snack consisting of bread and butter along with a cup of tea would stave off her hunger pangs. She then invited her friends for afternoon tea at home, and this meal was soon embraced by British households across the country.

Of course, the British love affair with tea is very much alive and well today. Stats on Gala Bingo outline that almost a third of Brits drink as many as five cups of tea a day, with different regions preferring their own type of brew. For instance, in Southampton (the UK city that drinks the most cups of tea daily), they prefer a pale and interesting taste for their tea. Meanwhile, in Edinburgh, they enjoy a rich mahogany brew. Lastly, Belfast likes a strong builder’s brew for their cup of tea.

Since the time of Anna Maria Russel, the Brits have taken this meal to new heights by pairing it with champagne. From high-end restaurants to prominent hotels, you’ll catch a flute of champagne served during a sumptuous yet pleasant afternoon tea. So, are you looking forward to indulging in a classic cup of tea and a fancy glass of champagne? Here are the best London establishments to enjoy this quintessentially British tradition.

Not too long ago, we shared how you can enjoy a refreshing take on tea and champagne at the Dandelyan at the Mondrian London with its playful sandwiches and retro cakes. Fast-forward to today, and it’s no longer at the hotel. CNN notes that the establishment has been transformed to the more straightforward but equally sophisticated Lyaness. But don’t fret, as it still serves some of the best tea and champagne in London. The Lyaness’ Fancy Tea offers classy brews, such as handcrafted English breakfast tea, Earl Grey with pure bergamot oil, and green tea from Japan. Your cup of tea will be paired with a glass of champagne made by top houses like Laurent-Perrier and Krug Grande.

The Ritz London is an institution of British society. This is why it’s no surprise that it serves exquisite afternoon tea and champagne. But did you know that teatime at this five-star hotel has a feminist background? Its Palm Court was one of the first places in London’s polite society where women could have tea unchaperoned, and the entire place was actually designed for women. Today, anyone can freely partake in a Champagne Afternoon Tea sitting at this hotel. Apart from its rich selection of teas and the signature Ritz Champagne, you can sample some of its 700 macarons and 1,000 scones, which are freshly baked everyday.

Last but not least, you should definitely add The Delaunay café to your itinerary. Although it’s not as fancy as The Ritz London, its afternoon tea and champagne is just as delightful — but a little more budget-friendly. Located in the vibrant Covent Garden district, this European café serves its own Delaunay Blend tea, which has a malted taste with a hint of bergamot. And of course, the set is completed by a glass of champagne from the Pommery Brut Royal. What’s more, the afternoon tea and champagne set comes with a selection of their signature Viennese cakes or some classic fruit scones with strawberry jam and clotted cream.

As a treasured meal in the UK, we hope you get to enjoy a proper afternoon tea and champagne at one of these London establishments. And while rules aren’t as strict as before, don’t be afraid to put your pinky up when drinking your cuppa!

London tea
The Best Establishments to Get Afternoon Tea and Champagne in London2021-08-302021-08-29https://thirstymag.com/wp-content/uploads/2016/04/thirsty-nyc-logo-1.pngthirsty.https://d2rf0detuhmti.cloudfront.net/wp-content/uploads/2021/08/tea-in-london-featured.jpg200px200px
About
thirsty 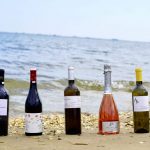 Wines of Greece: The Regions and Varietals To Check Out NowFeatures, Sponsored, Spotlight