There is no doubt that the environment – and our relationship with it – has been changing in recent years and these cocktails at bars and restaurants around Los Angeles show that making just a small change can have a positive effect.

In Slane in the Membrane at Ronan 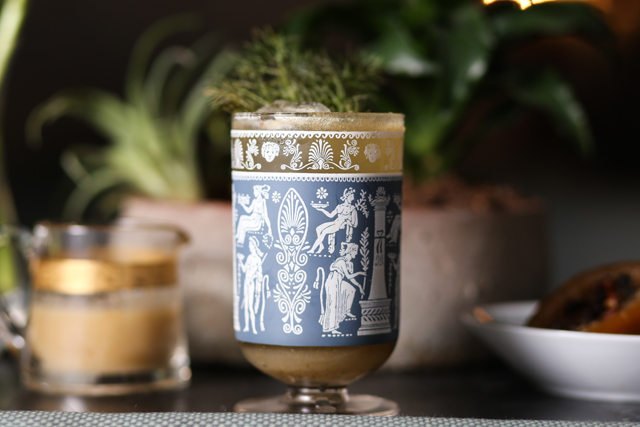 At L.A.’s Ronan, the In Slane in The Membrane cocktail incorporates various sustainable practices, including repurposing lemon husks and including foraged fennel. A creative blend of Slane Irish Whiskey, salted lemon coulis, wild fennel cordial, oxidized white wine, orange bitters and club soda, the In Slane in the Membrane uses a handful of housemade ingredients with an eye toward sustainability. “It’s structured like a Slane Collins, with some great complexity coming from the slow-and-low process of prepping the ingredients,” says Ronan’s Beverage Director Nick Meyer. “Rich and deep lemon and fennel flavors create the frame for Slane Irish Whiskey to shine through.”

“We juice fresh citrus juice at the bar and wanted to repurpose a lot of the spent lemon husks from that process,” says Meyer. “Chef Daniel created lemon preserves from these spent husks, with salt, juniper berries, fennel trim, leftover lemon juice. After the husks become somewhat translucent after about a week, we puree the husks with a little water and sugar and create a salted lemon coulis as the acidic base of flavor for this cocktail.”

Meanwhile, the wild fennel cordial is made from foraged fennel tops. “Chef has been wild foraging fennel tops for years around Los Angeles (he has his secret spots) and uses them in his cooking,” adds Meyer. “I take all of the imperfect bits of trim from that, fennel bulbs and stalks as well and make a straightforward Fennel Cordial by simmering all the fennel scraps in sugar and water.”

But it’s not just this cocktail that is made with earth-friendly practices. “At Ronan, we aim to support the environment whenever and wherever we can in order to sustain the Earth’s natural abundance for our children,” Meyer says. “We do this by engaging in business with suppliers whose practices avoid the depletion of our natural resources and make concerted efforts to maintain ecological balance. Whether it be through supporting farmers who practice zero tillage, serving sustainably farmed fish, or our small effort to compost our waste on-site, we believe every little bit counts.” All of Ronan’s plateware has been passed down through family or procured from second-hand stores. The bar is tied into the kitchen, where each uses each other’s waste in composing cocktails and dishes.”

The Irish Hello at Here & Now 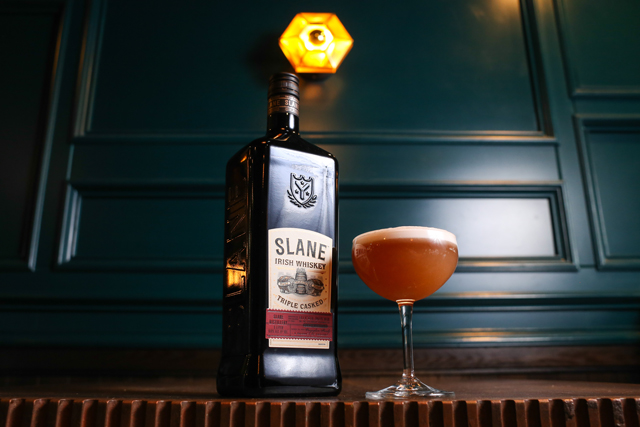 You might have heard of the Irish goodbye – but here is the Irish Hello. Served at Here & Now, this cocktail blends Slane Irish Whiskey with lime, honey syrup, egg white and Angostura bitters served up in a couple. At Here & Now, they have been “taking lots of steps to reduce waste and environmental impact,” says owner Sarah Meade. Case in point: instead of burning the ice at the end of the night, they take ice to planters on the patio to water the plants versus running more water. In the Irish Hello, the honey syrup is created using local honey, the egg whites are a by-product of the kitchen creating sauces and aioli with just the yolks and the plum cordial “was made using both seasonal and sustainable produce from local farmer’s market in conjunction with working with the kitchen in shared dishes and cutting back waste,” says Meade. 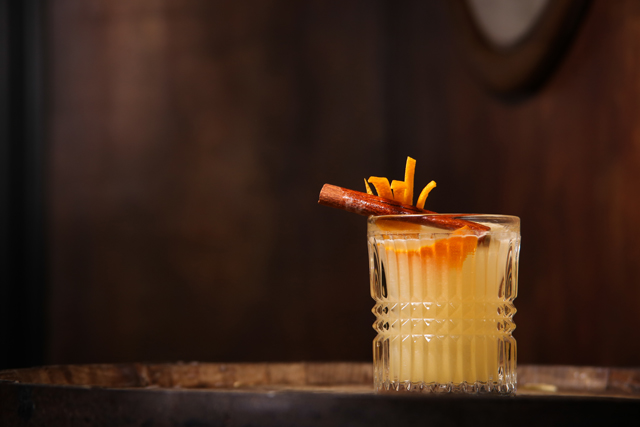 Hatchet Hall focuses on sourcing produce and meats locally and eliminates their kitchen waste almost entirely. With the Sullivan Square cocktail made with Slane Irish Whiskey, Old Forester Single Barrel bourbon, orgeat, orange nutmeg cordial and cinnamon syrup, Tajian de Mello seeks to emulate these same principals, highlighting responsibly sourced materials and waste-reducing ingredients. “Oranges have become the bane of my bartending existence,” admits de Mello. “Every night, we send out a hundred Old Fashioneds alone, each one with its own twist of orange. By week’s end, all that’s left is a case and a half of peeled, useless fruit. I say useless because as far as I am concerned, there’s no real place for orange juice in cocktails.”

de Mello continues: “So, what do you do with the hundred-plus peeled oranges you have sitting in the walk-in? That was the question that really got me thinking. Up until that point, we had been juicing the leftover oranges and just drinking it ourselves (which no one was really complaining about), though it seemed like a severely missed opportunity. Instead of “wasting” all of this fresh citrus week after week, I wanted to find a more sustainable practice that we could incorporate back into our cocktails.”

After playing around with it for a bit, the solution that de Mello came up with was actually rather simple: reduce it. “By boiling the juice down, you not only eliminate much of the excess water but also preserve both the flavor and acid from the juice, creating what is essentially a very concentrated version of it,” de Mello shares. “Additionally, the flavors in a reduction can be added upon by combining other ingredients in the saucepan. This helps to take away that just brushed your teeth flavor that I hate. In our case, I threw in a bit of nutmeg to add a winter feel to the cordial.”

The end product was the flavorful Sullivan Square cocktail, with Slane Irish Whiskey. “I found that this cordial plays really well with the baking spice, honey, and floral notes that you get from Slane,” de Mello says. “I took it a step further and added just a touch of cinnamon syrup to further play up on that winter spice note. And with a little bit of our house single barrel of Old Forester to both add a little body and accentuate the caramel and vanilla, the cocktail really came together. It’s bright and crisp, with hints of almond, citrus, and warm baking spices, tucked into a cozy blanket of cinnamon and vanilla.” 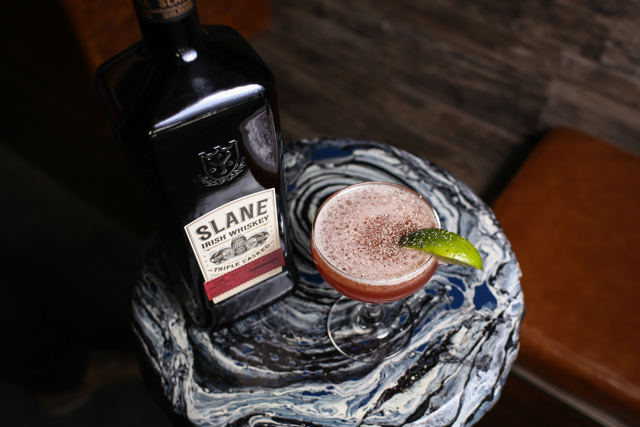 Cocktail created by Bar Manager Ryan Romero, the Irish Rover at Relentless Brewing + Spirits is a riff on the classic Jack Rose cocktail. Made with Slane Irish Whiskey, lime, grenadine, saline and housemade pecan syrup – but this isn’t just any pecan syrup. First off, it must be noted that all of the produce at Relentless comes from local and sustainable farmers’markets. This includes pecans, which the chef candies for a few of their signature dishes, including their coffee budino. Then Romero takes the leftover liquid from that candying process and makes a toasted pecan syrup, which is used in this cocktail. The lime juice and grenadine are also made from leftover ingredients from the kitchen as well. We can certainly drink to that.

The Tom Foolery at Providence 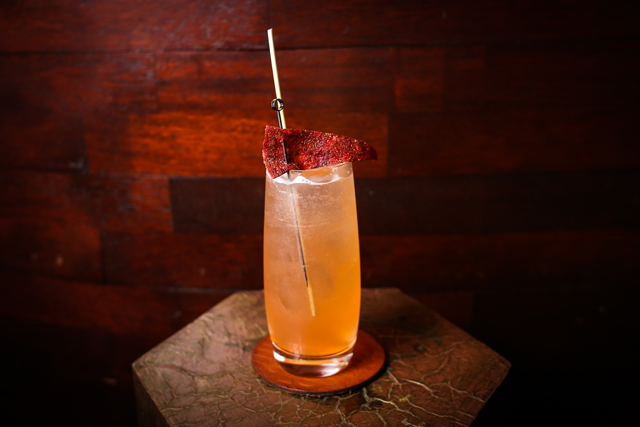 Providence has made a name for itself thanks to a zero-waste program and local, seasonal ingredients in the kitchen – and the Tom Foolery cocktail with Slane Irish Whiskey, fresh lemon and grapefruit juices and strawberry and charred bell pepper shrub is made with those very same values in mind. “The Tom Foolery is a fun and fruity play on a tall and refreshing Tom Collins style drink,” says Bar Manager Kim Stodel. “The strawberry and bell pepper shrub helps not only flavor the drink, but the remaining pulp from the strained shrub is re-used to create a delicious edible garnish in the form of a sweet and sour fruit leather. I’m a big proponent of edible garnishes.”

When conceiving the drink, Stodel knew that he wanted to use strawberries and bell peppers because “they just came into season here, everyone loves them and I think they pair really well with the Slane Irish Whisky. Normally you’d muddle, juice or infuse them to get those flavors into the drink which is fine, but would ultimately result in some waste. I can do better! Like the Conyngham’s (Slane founders), I’m always thinking of reducing waste which is how I developed the shrub and garnish technique used in this drink.”

Stodel continues: “I make a shrub of red bell pepper and strawberry by letting them sit in sugar to macerate and then adding vinegar to contrast the sweetness. In a few hours, I have the most beautiful shrub syrup that I strain and bottle for later use in my cocktail. The real tomfoolery, however, comes in the additional step of turning the remaining shrub pulp of strawberry and pepper into a fruit leather garnish by blending it into a puree and dehydrating it overnight. Silly, right? The result is a magical, shiny, chewy sweet and sour sheet of fruit leather that can be cut into all sorts of fun shapes and sizes and best of all placed on the cocktail as a one of kind edible and tasty garnish! What’s IN the drink IS the garnish. Nothing is wasted and we can all get on with having a good time! ”

Stodel adds that he, “loved using Slane Irish Whiskey on this project because of their ethos on sustainability and because I really liked how well the delicious whisky played with the shrub. It’s bright and refreshing, sweet, sour and slightly savory. It’s a very silly version of a Tom Collins which is why the zero-waste and Irish influence make it a “Tom Foolery.”

All photography by Eugene Lee / @eugeneshoots

5 Artsy Bars To Hit Up During Frieze Los AngelesFeatures

Valentine’s Day Cocktails to Sip and Savor in L.A.Features