Toasted Marshmallow at Tiki No in North Hollywood

There really isn’t anything better than a fun and boozy night out with friends at a super cool tiki bar, is there? North Hollywood spot Tiki No certainly fits the bill, with a variety of reimagined tiki-style cocktails, like flaming Scorpion bowls and the not-to-be-missed Toasted Marshmallow cocktail.

“At Tiki No, we’re all about fusing old-school tiki style with a modern Los Angeles taste, and to us that means keeping the classic flavor profile of tiki drinks, with an eye towards top-notch mixology and fun twists on cocktails,” explains Sunni Aceves, Senior Bartender at Tiki No. “A crowd favorite is the Toasted Marshmallow, which is made with Overproof Rum-St. Croix, Fluffed Vodka, Licor 43, Falernum, fresh apple and lemon juice, and then a touch of cinnamon. The soaked marshmallow is set on fire, which patrons love.”

For those who don’t do marshmallows, Tiki No’s other go-to cocktail is The Scorpion Bowl, with a potent blend of Don Q rum, gin, brandy, fresh orange and lime juices, Orgeat, cinnamon dust, and then an extra shot of Overproof Rum served in a flaming bowl because, says Aceves, “this drink is meant to have a delightful sting, meant to be shared and have a little volcano in the center for extra panache.”

All ingredients combined over crushed ice.  Topped with a 151 soaked marshmallow. Ignite marshmallow and lightly dust with cinnamon while still on fire. 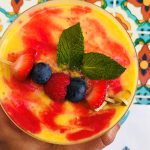 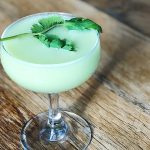