As bar pop-up, takeover and guest shift culture has made a major impact on global bartending culture, it has created opportunities for like-minded brands and bar concepts to team up in very meaningful ways. Torres Brandy and barmini by José Andrés have created a strong symbiotic relationship that is a great example for the industry on how brands and bar teams can create very special experiences that expand the reach and awareness of both in a big way. Torres and barmini  teamed up for one of the biggest festivals in the world to showcase the brightest talents, latest trends and most exciting spirits, Tales of the Cocktail 2019, for an exclusive invite-only pop up  that gave guests an intimate opportunity to experience barmini and expand their minds on the possibilities of Torres Brandy as interest in brandy has skyrocketed across the globe.

For the Tales of the Cocktail event, Torres invited guests to extremely exclusive seated tasting menu experience with the the barmini team, led by Cocktail Innovator of José Andrés’ Think Food Group, Miguel Lancha. The event was at the historic Napoleon House in New Orleans. The special tasting menu of barmini cocktails were made with Torres 10, Torres 15, Magdala and El Gobernador Pisco; there were also elegant pours of the portfolio’s most premium offerings, Torres 20 and Jaime I. 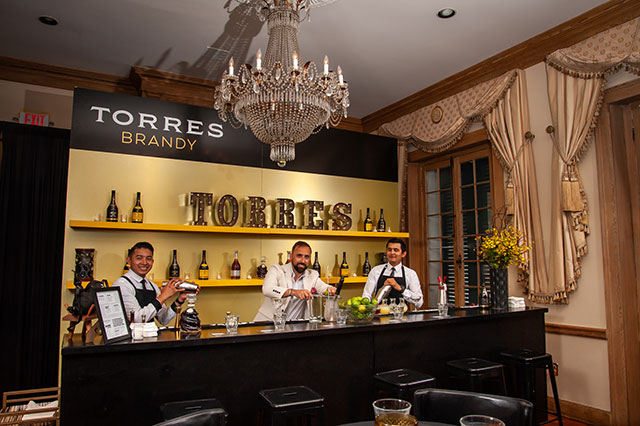 Torres teaming up with barmini was a natural fit as they are both known for honoring heritage with a focus on artistic innovation in the spirits and bar world.  Also, it would be remiss to mention that Torres and José Andrés both share the native home of Spain.

Upon arrival, guests were personally greeted by Javier Reynoso, Global Brand Ambassador of Torres Brandy, who offered tastes of the two most luxurious offerings – Torres 20 and Jaime I – as they walked in the historic parlor.  Seatings were limited to exclusive small groups to ensure it was an intimate experience and everyone was able to enjoy the VIP treatment. Although there were very subtle Spanish hints at the event, the vibe was more focussed on bringing the modern avant-garde barmini cocktail experience idolizing the versatility of Torres Brandies. Holding the barmini pop-up at one of New Orleans most historic venues, Napoleon House, which dates back to 1794 and live music by a local New Orleans jazz trio that played everything from classics, Latin grooves and modern pop music made a magic Oasis within the Tales of the Cocktail festival.

Each seating was 45-minutes and included four specialty cocktails that were presented tableside: 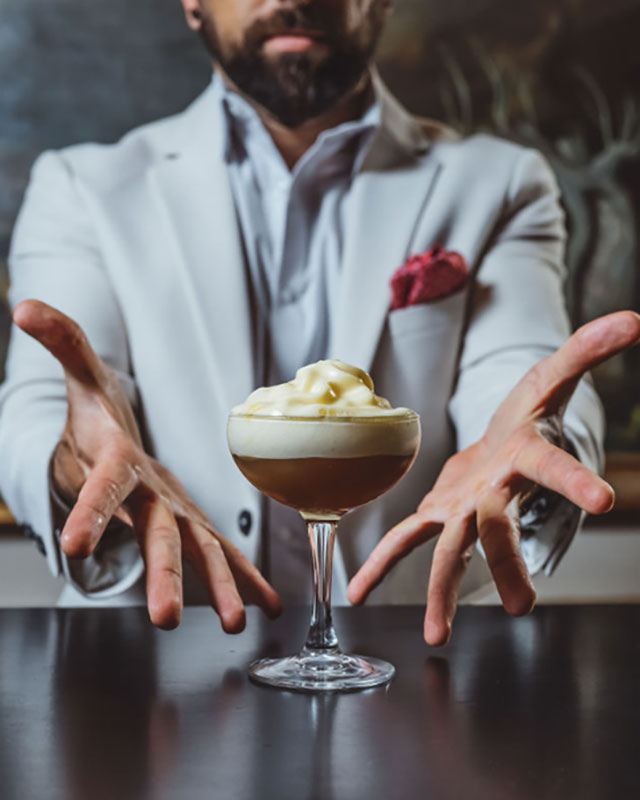 Torres 10 shaken with lime juice and honey with an absinthe rinse and passion fruit espuma. 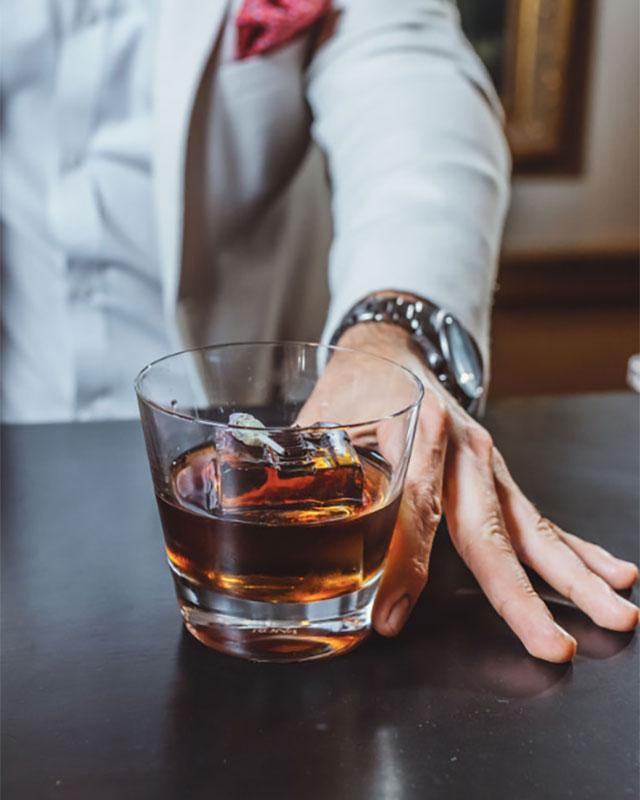 Torres 15, Yzaguirre 1884, east India sherry, Rittenhouse rye and lavender bitters, aged for a couple of weeks in a goat leather bag and stirred after the leather-aging, with ice and the bitters. 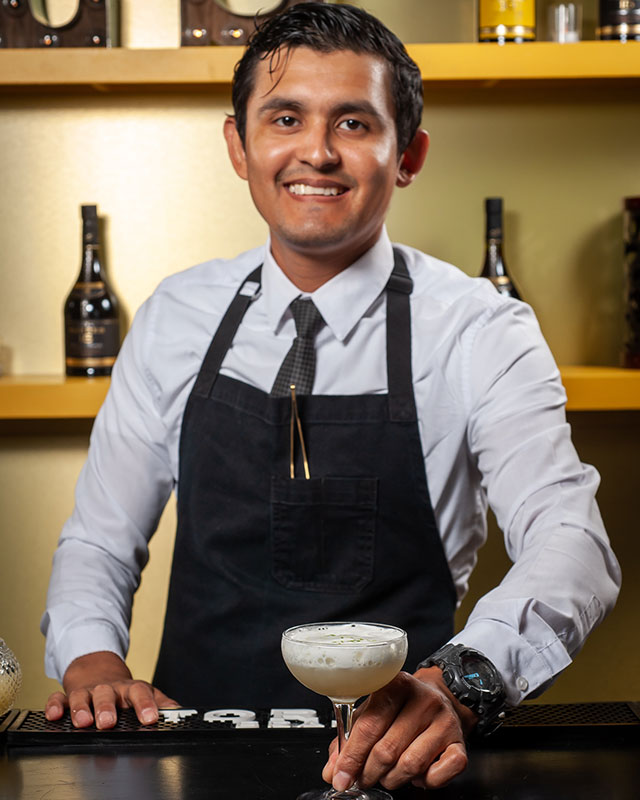 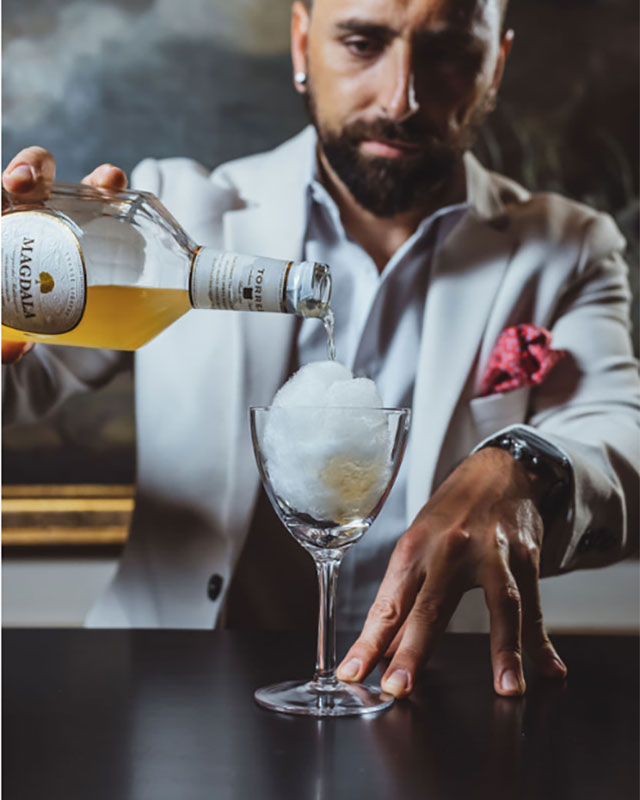 “Having our event with barmini at Tales of the Cocktail was special because of the unique energy that  TOTC has and it is such an important event in the community,” Reynoso tells thirsty. “Hosting our Torres experience session in a place iconic as the Napoleon House was very meaningful to us. In a venue with so much history, we were able to share barmini’s wonderful cocktails with friends, and guests were able to learn more about Torres Brandy in this exceptional atmosphere. Combine great friends, live music and fantastic cocktails in an intimate setting during one of the biggest cocktails festivals in the world and the result was truly beautiful!”

“A collaboration between barmini and Torres was something that was very fun and appealing for us,” explains Lancha. “It made sense because of the ambassadorship that Torres does for Spain in the drinks world and the people involved in each team share this passion for heritage and innovation. The event was set up beautifully and flawless, with so much warmth and care.”

The Torres x barmini Experience at Tales of the Cocktail 2019

barmini celebrity bartender Pop Up Tales of a Cocktail torres
The Torres Brandy & barmini Experience Combines Heritage and Innovation2019-10-172019-10-17https://thirstymag.com/wp-content/uploads/2016/04/thirsty-nyc-logo-1.pngthirsty.https://d2rf0detuhmti.cloudfront.net/wp-content/uploads/2019/10/2019-07-18_52chefs_torres_wr-0622-featured.jpg200px200px
About
Tara Fougner
Co-Founder of thirsty, Tara Fougner has over over 15 years of industry experience and a passion for the global beverage community. One might think that Tara was destined for beverage media as her great-grandfather, G. Selmer Fougner, is credited by David Wondrich as being "America's First Drinks Writer." A lifelong New Yorker, you can usually find her hunkered down on some barstool around the world chatting up the bar crew about their beverage program and endlessly taking pictures of drinks for the 'gram. In 2020, Tara was honored by Drinks International on their 'Top 100 Most Influential In the World' List.