Where to Watch the Super Bowl in NYC

Super Bowl Sunday is only a couple of days away and whether you are a fan of football or not the Super Bowl is usually a fun time to hang out and day drink with your friends. We have put together some venues from everything to Patriots sports bar to the Bounce Pop Up party at the Highline Ballroom. 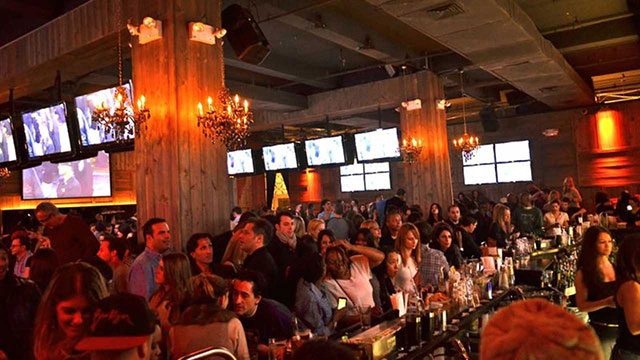 This is a great spot for the casual sports fan or the fantasy footballer or better since you will get to see every game. The 26th Street location will have The eCUSSIONIST:  Matt Vorzimer will be DJing/Performing Live sets before, after and throughout the game at this location.

Head here early for the complimentary cocktails before the game starts and then watch on one of their seven big screen TVs along with a special game day menu including some special Jägermeister food created by Chef Chris Santos and complimentary cocktails from 5:30-6:30 pm. There will also be raffles every quarter for prizes. Call (212) 614-0146 for reservations. 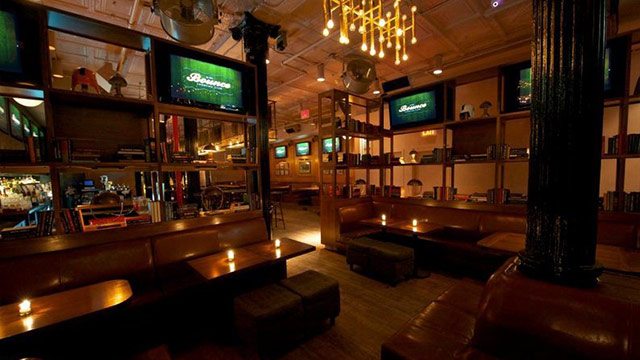 Bounce Sporting Club is a great time place to watch sports, however, be aware that this basically turns into a nightclub. They do have a great cocktail program with a number of signature cocktails like the Lion of Culiacan (El Jimador Bianco, Ruby Red Grapefruit, Spencer’s Jalapaño syrup and Ilegal Mezcal.) Table reservations are also strongly recommended. 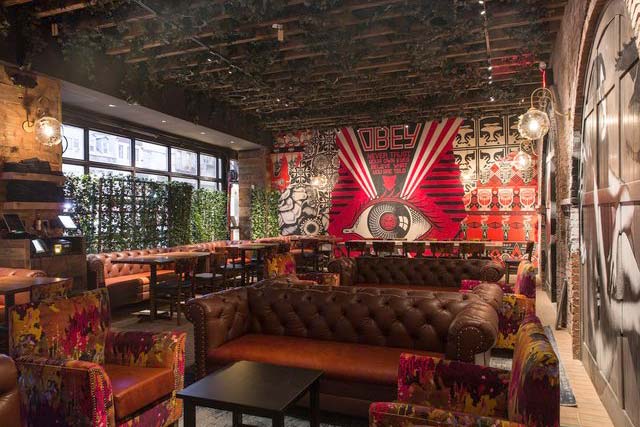 Vandal will be hosting a Big Game viewing party in honor of the Super Bowl on Sunday, February 5th starting at 6:30 pm. They are bringing in big screens and projectors to show the game and there is a special game day menu with including special Jägermeister food created by Chef Chris Santos, Jägermeister drink specials and raffles including prizes such as a Jägermeister guitar and record player! Open bar and table packages available – call (212) 400-0019 for reservations & more info!

Best Bars to Watch the Super Bowl in NYC 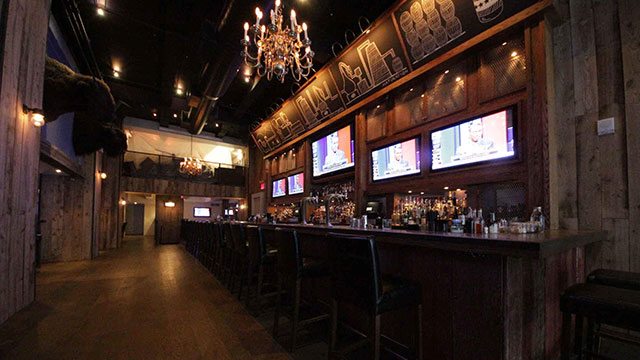 They have over 150 American made Whiskeys and a Southern-inspired menu. They also have 37 televisions and can accommodate groups up to 400 people. American Whiskey has two packages for Super Bowl Sunday. 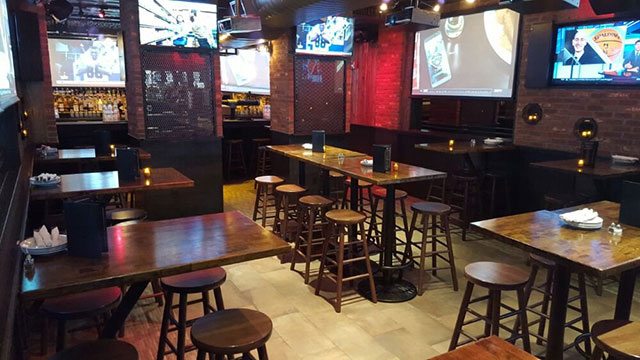 This bar is brand new to the East Village, located on the 1st street and 1st avenue right off of the F train. This will be their first football season open but they have an awesome setup with two bars, a solid number of high top tables, great drink specials, and a whopping 40 big screen TVs. No doubt, this is where we will be watching football whenever we find ourselves in the East Village. 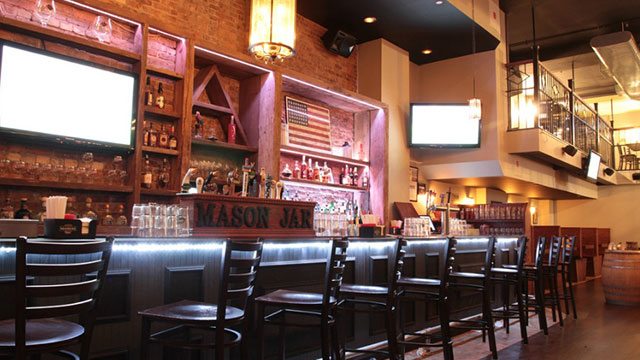 They show all of the games for college football they are a South Carolina bar. They have a huge beer selection on draft and they allow you to order beer flights of 4 – 4 oz draft beers for $12. 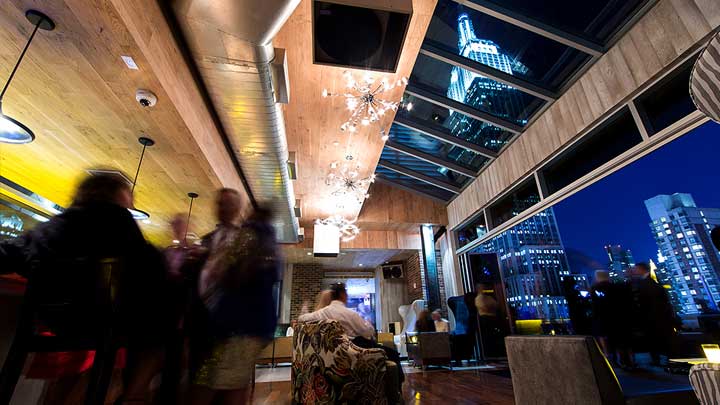 Monarch, which has enclosed its outdoor area for the winter months, offers spectacular sights of midtown Manhattan and a picturesque view of the iconic Empire State Building. On game day, February 5th, Monarch will boast 10 large screen plasma TVs and offer an a la carte menu including Jalapeno Poppers, a 3 Bean Chili, and an assortment of wings, as well as a specialty cocktail, the “Game Day Margarita” Cost of admission is $10 in advance, and $20 on game day. 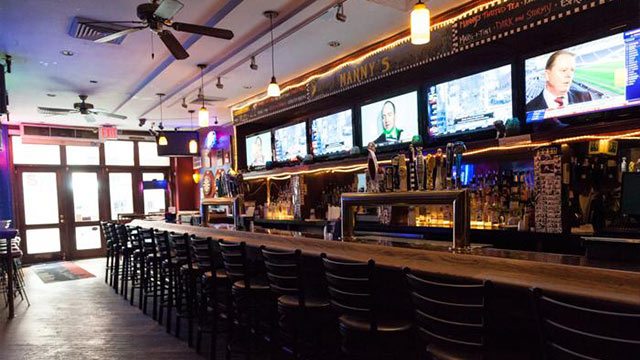 Manny on Second has 40 HDTV’s and virtually every major satellite/cable sports packages possible so you won’t miss a game. They also have an 80″ and five 63″ TVs. 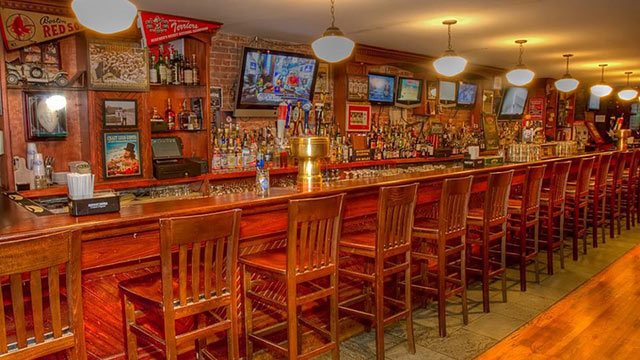 This is a Boston bar which means that if you are in NYC and a Patriots fan then you are going to want to make your reservations in advance.They have a ton of TVs so you will never miss a play. They have a ton of different beers on tap and some amazing nachos. 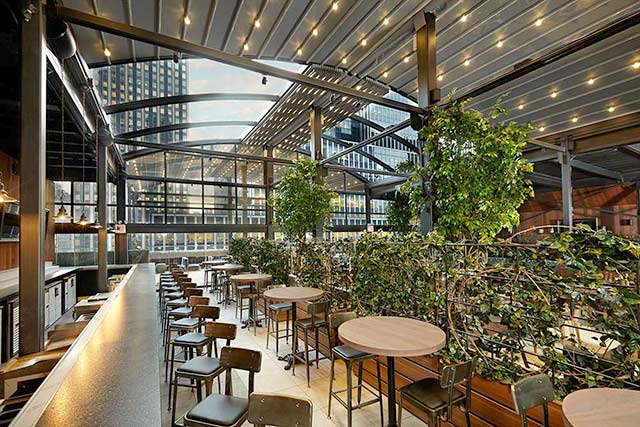 They have an enormous space that is great if you are looking not to feel cramped like many of the other sports bars in New York City. Did I mention that they have a HUGE patio and a retractable roof that literally turns a little more than half of the venue into outdoor space? The TV Situation is very strong, they literally have televisions everywhere. If you a fantasy sports fan then this is your spot. The Fantasy Sports Network will be broadcasting live from RR. 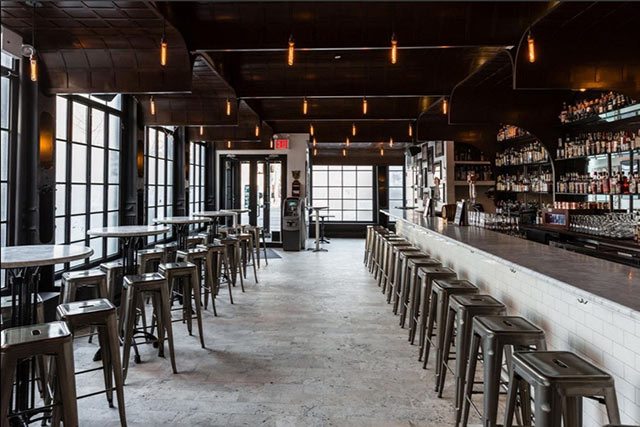 Rochelle’s will be showing the Super Bowl throughout the bar with doors opening at 2 pm. They will be selling buckets of Budlight beer, 6 for $20 per bucket and discount Stella pints ($6). Rochelle’s is also selling 9 tables which will sell out fast at $50 per person in each group. 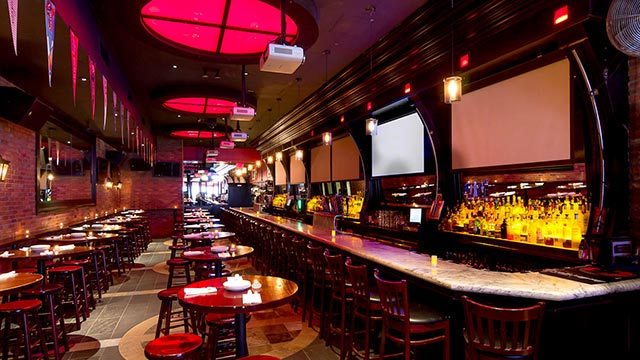 Tonic is a Penn State bar and they have $15 pitchers of Yuengling, Budweiser, Bud Light, Shock Top and Rolling Rock, beer buckets and even Mega Kegs of Budweiser or Bud Light ($40.00). They also do a bunch of food specials all which start one hour prior to kickoff for the duration of the Penn State games only. They do have three levels and a rooftop that makes a good place to watch a game, at least while the weather’s still warm. 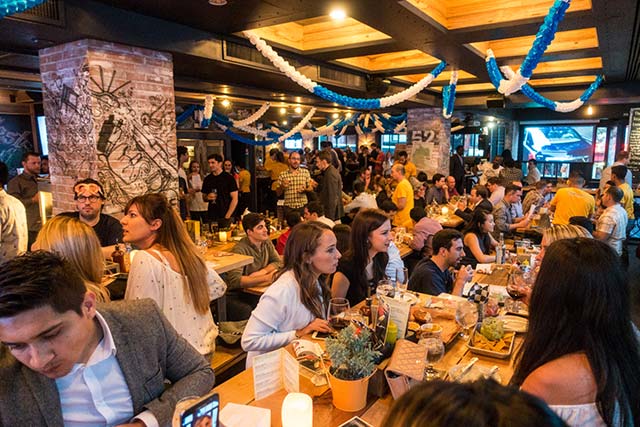 Treadwell Park comes fully equipped with 12 HDTVs, FREE popcorn, pinball and seasonal beer floats as well as a supreme selection of craft beers on draft. The beer hall is also offering up an array of festive Super Bowl specials including Platter of 20 pigs in a Blanket, a platter of 10 sliders with cheddar cheese, caramelized onions and not so secret sauce, bucket of 25 wings with horseradish cream – Texas Pete, Travelwell beer. Your choice of 10 pilsners, IPA, and cider cans in a complimentary cooler, crowler/wings take away package – 25 wings, choice of 2 crowlers with IPA, Pilsner or Wheat beer. As a special addition and in honor of this year’s highly anticipated halftime performer, Lady Gaga, Treadwell has concocted a unique cocktail entitled Perfect Illusion. Inspired by Gaga’s out of the box nature and her iconic meat dress, this drink smokes with dry ice, sparkles, and packs a serious punch ($18). 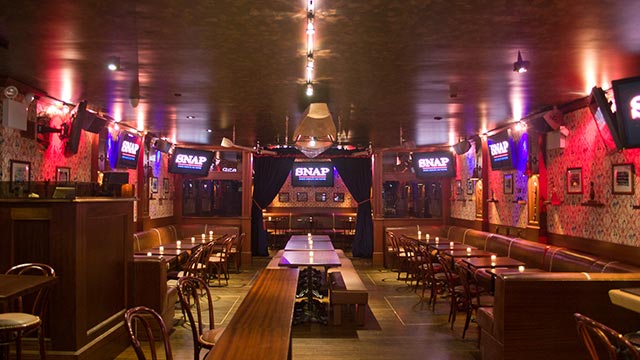 They have a decent selection of beer both draft and canned and they show all New York games (baseball, hockey, basketball, and football,) and a bunch of Premier League Football (Soccer) games.

Where to Watch the Super Bowl in Brooklyn 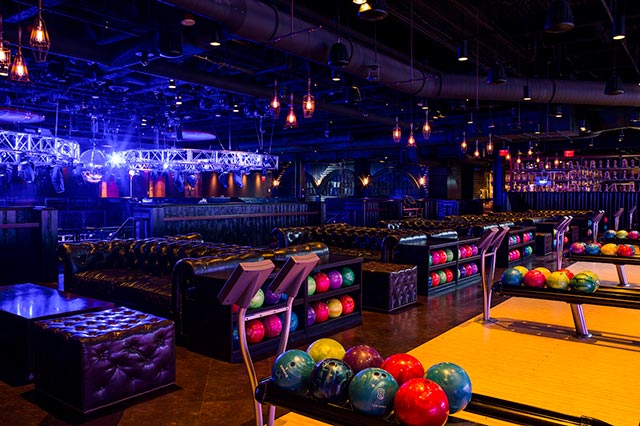 If you are looking for something a little different to do during the Big Game then head to Brooklyn Bowl. They have happy hour drinks from 4 pm to 6 pm with $4 beers, $4 house wine, $5 frozen margaritas.  You can also reserve a bowling lane for up to 8 people until the end of the game. The lane comes with couch, table and food and beverage service. (Bowling shoe rental  is included.) 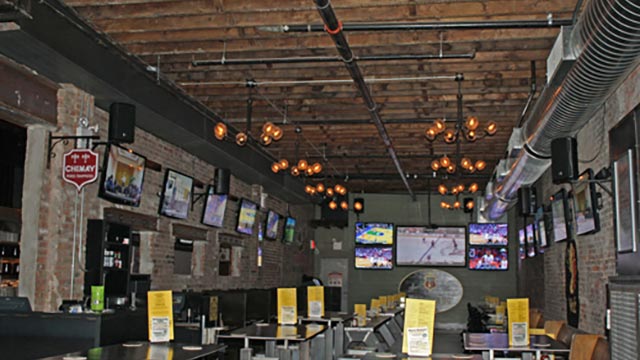 They have cheap good wings, tons of TVs and a large selection of beer to choose from. They also have a bar on Avenue B, but their venue in Brooklyn is more fun. 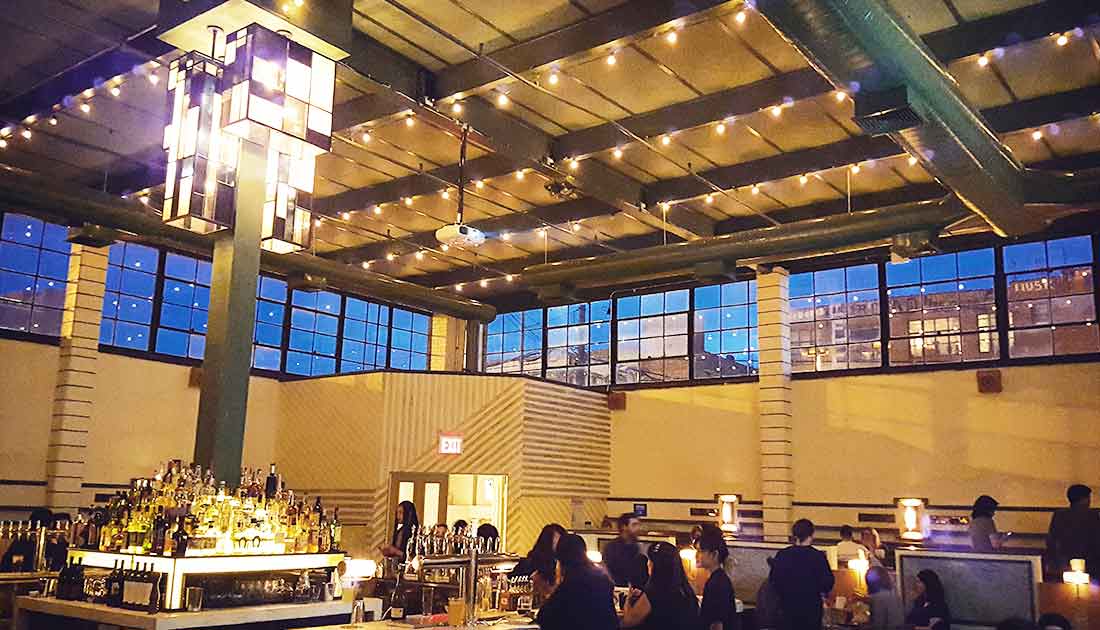 What could be better than watching the Super Bowl at this cinema/restaurant/bar? You can reserve your seat at the bar for $10 or inside the movie theater for $15. They also have VIP booths for up to five people for $150, but there are only four booths and comes with a couple of draft beer pitchers and platter of wings. Order the hot wings and barbecue pork rib and the Loaded Tatter Tots and Bacon Nachos.

Bars Popups Sports Bars Super Bowl Super Bowl Popup Parties
Where to Watch the Super Bowl in NYC2017-02-012018-03-19https://thirstymag.com/wp-content/uploads/2016/04/thirsty-nyc-logo-1.pngthirsty.https://thirstymag.com/wp-content/uploads/2017/02/where-to-watch-the-super-bowl.jpg200px200px
About
Jessie Gibson
I am one of the co-founders of Thirsty. I shoot photos of cocktails and video. You can learn more about me at Jessie Gibson or connect with me on Instagram: @JessieGibson. 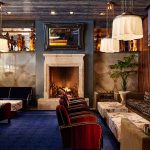 Warm Up This Winter at These Bars with Fireplaces in NYCFeatures 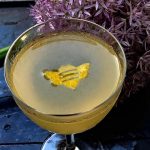 The 15 Mezcal Cocktails You Should Be Drinking NowFeatures