If I walk out the door of my apartment building in San Francisco’s Mission District, head down Valencia Street three-quarters of a block, then cross to the far side just before 17th, I come face to face with a mural of a beautiful woman surrounded by flowers in stunning color. Most of the people who pass this wall would be surprised to hear that it’s part of a cocktail menu, but surprising people is in Trick Dog’s DNA, and their most recent menu takes that principle to new heights. 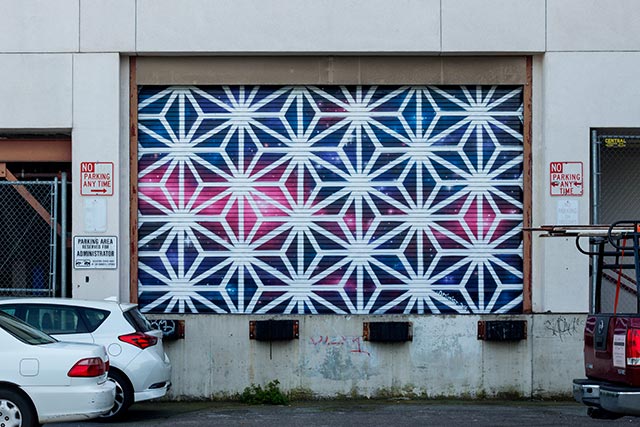 The team behind Trick Dog has built their rabid following by putting as much emphasis on the experience of drinking as the cocktails themselves. Their most recent offering they channeled their passion for supporting the local community by teaming up with some of San Francisco’s most renowned street artists to create a mural for each drink. The menu itself is a book featuring photos of the murals, and sales of these collector’s items go to support the non-profits Precita Eyes and Creativity Explored.

Because I’m lucky enough to live in the neighborhood, I got to pass a few of the murals on my way to Trick Dog to meet with Creative Director Morgan Schick. They were like visual aperitifs, whetting my appetite for the cocktails to come.

The New Menu at Trick Dog 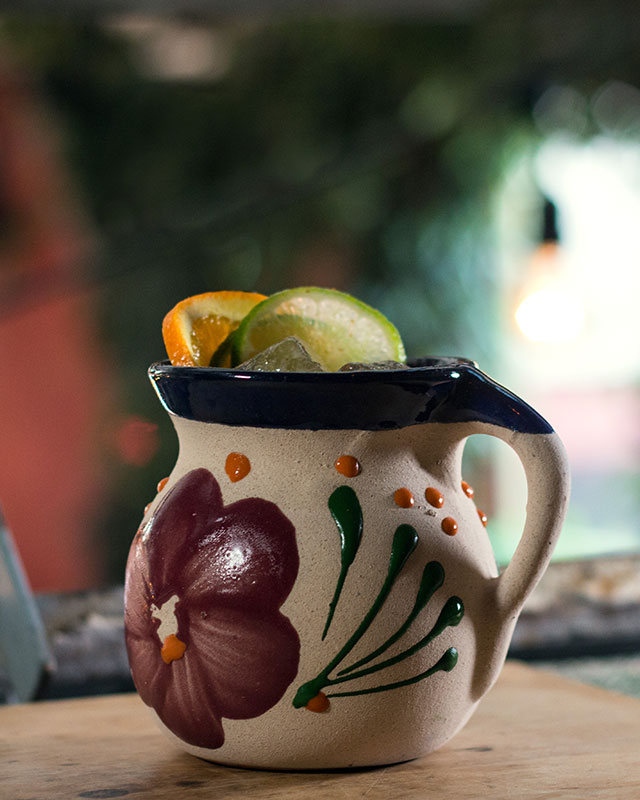 My first drink was the Sam Flores, named after the artist who painted the Señorita wreathed in flowers. Morgan said he wanted to create a tequila-horchata drink, but though it made sense, in theory, he couldn’t get it to work in practice. Finally, in a fit of inspiration, he replaced the water in the housemade almond milk with pear juice and all of a sudden, the drink sang. Mine went down all too easily. 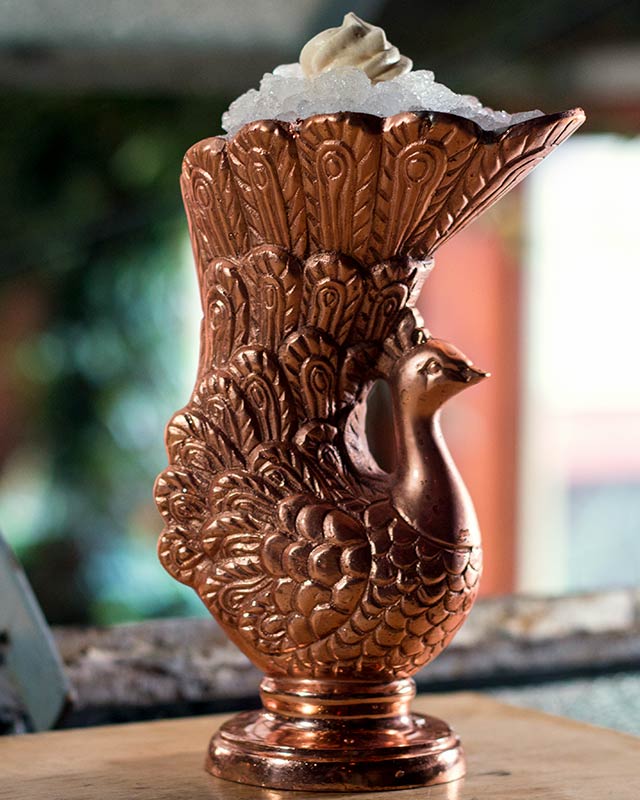 Cocktail number two was the Optimist, named after an artist who painted a galaxy of deep purple and magenta dotted by stars at the end of an alley near the bar. The peacock chalice it arrived in made me laugh – the Optimist is a high-brow riff on the White Russian, so this level of kitsch felt appropriate. The drink itself is as smart as it is entertaining. The coffee liqueur is enhanced with Earl Greytepacheand the merengue that comes on top is toasted until it tastes like an English biscuit, a perfect tea-time combination. 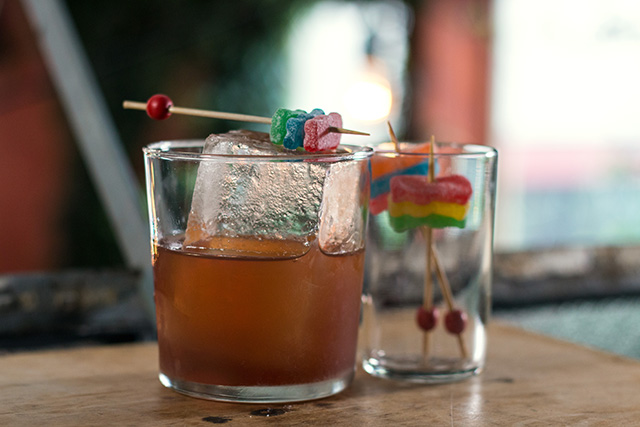 The fun continued with the Ronnie Buders, a drink that shows a sense of humor by incorporating five ingredients that all start with the word “sour.” Morgan confesses that he printed the menu before finalizing the recipe, but he had a feeling it would work, and it does, masterfully. I couldn’t believe the depth of flavor, which was every bit as complex as the Sour Patch Kids were playful. 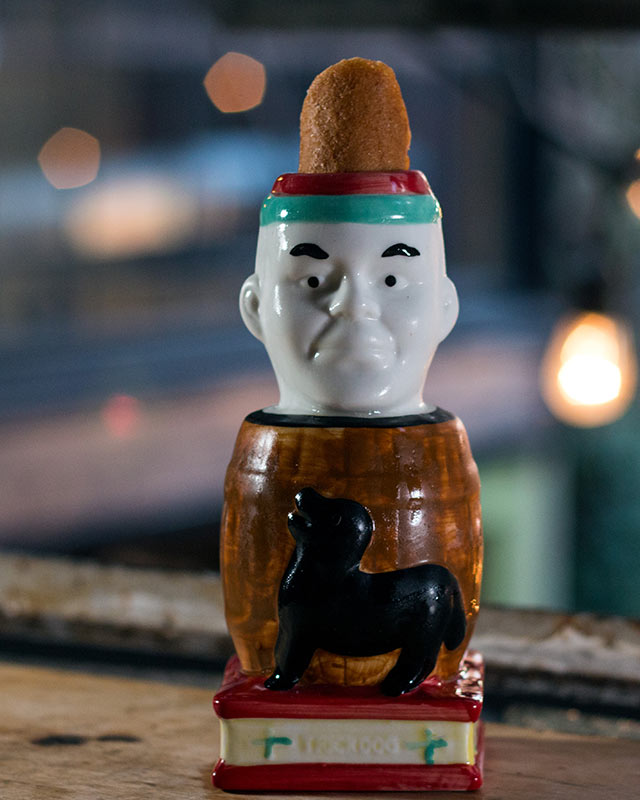 I know Morgan has a thing for Piña Coladas, so when I tasted this one, I laughed out loud. It was like a clarified version of the blended classic. Morgan’s culinary background shines through in a couple of ways here. He uses a rye-berry tincture to compliment the pineapple and the drink comes topped with a decadently iced white chocolate wafer. 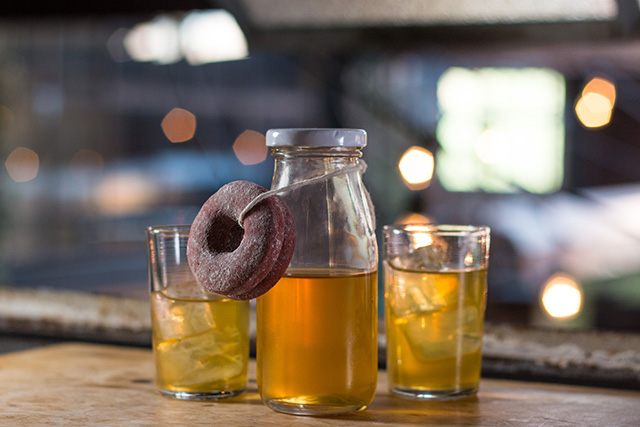 I have a confession to make: I stole the bottle this came in so to continue smelling the powerful aroma of the drink after I left. (Morgan, I’m sorry.) I’m a big fan of clarified milk punches, but I’ve never had one this rich before. It reminded me of a liquid Kouign-Amann and the spice cookie it came with complemented the drink perfectly. 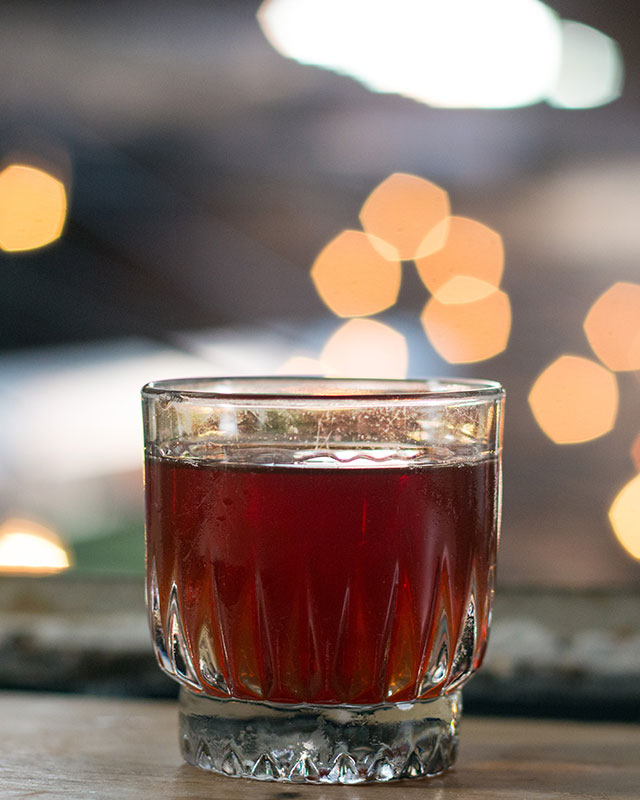 I finished my tasting with a cocktail that reminded me of a fruit-forward Vieux Carre. The drinks at Trick Dog typically have busy ingredient lists, but this one is even longer than it appears. The Strider’s “Vin de carotte” is actually three fortified wines blended together and infused with fresh carrot. It’s wonderfully intense.

Every time I go to Trick Dog I learn few new tricks myself. I recommend getting there early (the place fills up fast) but if you show up in the afternoon, you can catch a golden sunlight through the high windows and a bartender who has a little time to talk shop while you enjoy yet another wonder in a glass.

Art Mission District New Menu
Each Drink A Work of Art on New Menu at Trick Dog2017-04-122017-04-12https://thirstymag.com/wp-content/uploads/2016/04/thirsty-nyc-logo-1.pngthirsty.https://thirstymag.com/wp-content/uploads/2017/04/new-menu-at-trickdog-sf-mural-project.jpg200px200px
About
Matthew Wyne
Matthew is a graphic designer with a cocktail obsession. He blogs about the history of cocktails and cocktail design at Letters and Liquor 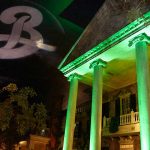 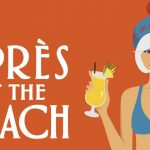