To celebrate awards season, Tequila Don Julio set out to find their first-ever Star Back who would work alongside bar icon, Charles Joly, at a major red carpet event in Los Angeles. Regional competitions were held across the U.S. in San Francisco, Houston, NYC, Chicago and Miami creating an energetic field of talented bartenders for the finals.

During a Grand Finale in New York City, all five Finalists created three Don Julio cocktails – a Paloma riff, a celebratory cocktail and a creative cocktail. In the end, NYC’s hometown bartender, David Roth of Covina, won the ultimate prize.

Here are Roth’s creative and celebratory cocktail that won him the honor of being the very first-ever Don Julio Star Back.  See you on the red carpet, David!

I wanted to take a common, familiar drink and zhuzh it up a bit, elevate the flavors and the overall drinking experience. I took the basic Tequila Sunrise (Blanco Tequila, Orange Juice and Grenadine) and gave it a makeover. I used Don Julio Blanco for its mixability and light agave flavor. Next, I backed up the orange juice with fresh lime. Instead of grenadine, agave syrup is the sweetening agent to complement the Don Julio Blanco’s light agave flavor. Thyme was added to highlight the green notes of the unaged tequila as well and add a little depth and complexity. Finally, avocado oil is placed on top with both large and small bubbles to add body and texture to the drink in addition to adding a light, fruity avocado note. It’s a fun play on a simple drink since drinking is supposed to be fun and drinks are supposed to be delicious. Of course, that is subjective and different for everyone which is a lesson my first mentor taught me in New York, and one I’ll never forget. 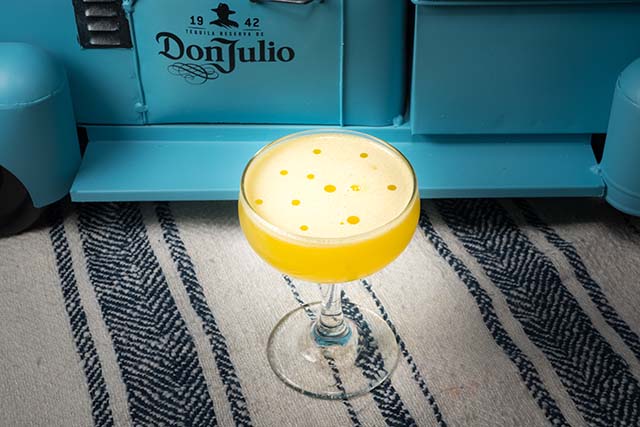 “I wanted to take the flavors of a seasonal Mexican punch and combine it with a celebratory champagne cocktail,” explains Roth. “Tamarind, apple and cinnamon are the notes I used; they complement the Don Julio 1942 with notes of spice, chocolate and caramel. The drink is named after the 1952 movie, Viva Zapata! a film about a Mexican Revolutionary. It was nominated for several Academy Awards and seemed only fitting to honor another Mexican Revolutionary, Julio Gonzalez. To recap, a delicious and fun champagne cocktail with flavors of a seasonal Mexican Punch worthy of a red carpet affair. I chose Don Julio 1942 because it represents luxury and class; very fitting for a super swanky Hollywood event.” 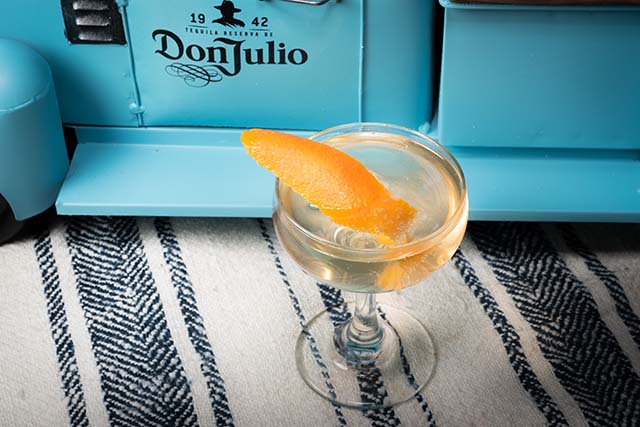 Method: In a mixing glass combine Don Julio 1942, vanilla syrup, tamarind soda and bitters. Stir briefly to chill, Strain into the cinnamon smoked coupe*. Top with cava. Twist the orange peel to express the oils from the orange onto the surface of the drink. Drop the peel into the coupe.

* To smoke a coupe with cinnamon, take 1 stick of cinnamon and light one end with lighter or matches. Hold coupe over the smoking cinnamon stick and let the coupe bowl fill with smoke. Place the coupe bowl down to hold the smoke until the cocktail is ready to serve.

All photography by Eric Cecil

Bartender Competition cocktail competition don julio NYC Bartenders star back tequila cocktails
Don Julio Star Back David Roth’s Award Winning Cocktails2020-02-062020-02-06https://thirstymag.com/wp-content/uploads/2016/04/thirsty-nyc-logo-1.pngthirsty.https://d2rf0detuhmti.cloudfront.net/wp-content/uploads/2020/01/don-julio-star-back-cocktail-feature-scaled.jpg200px200px
About
Tara Fougner
Co-Founder of thirsty, Tara Fougner has over over 15 years of industry experience and a passion for the global beverage community. One might think that Tara was destined for beverage media as her great-grandfather, G. Selmer Fougner, is credited by David Wondrich as being "America's First Drinks Writer." A lifelong New Yorker, you can usually find her hunkered down on some barstool around the world chatting up the bar crew about their beverage program and endlessly taking pictures of drinks for the 'gram. In 2020, Tara was honored by Drinks International on their 'Top 100 Most Influential In the World' List.

By George: Kellie Thorn Teams Up With Hugh Acheson With A French Inspired Program In AtlantaFeatures