BACARDÍ continues to keep dance close to their brand’s heart with “Conga Feat. You” campaign in which they worked alongside artists Meek Mill, Leslie Grace and Boi-1da to crowdsource dance moves and vocals from fans around the world.  We have been deeply involved with BACARDÍ Rum Shakers program and can truly cosign that their commitment and passion for dance is for real, for real. In November 2020, BACARDÍ made a worldwide call for dance and voice submissions and included some of the Los Angeles Rum Shakers in the early part of the “Conga” campaign urging everyone to “Do What Moves You.”

“The Rum Shakers program is all about supporting bartenders by giving them a chance to do what moves them beyond the bar through dance. As part of the program, bartenders – or “startenders,” as we like to call them – around the country were selected by Tales of the Cocktail Foundation to participate in a dance competition. Though we had hoped to continue that with TOTCF this year, unfortunately, we had to put things on hold due to the pandemic. During these times, we still wanted to find ways of working together – and luckily we had gotten the ball rolling pre-COVID to integrate some of them in our latest campaign, Conga Feat. You. Conga is all about feeling the rhythm of the beat, so we felt it was a perfect fit for our talented Rum Shakers to show us their moves.

Pre-COVID, we filmed content with them in Puerto Rico, which was later used for a series of GIFs supporting Conga. When the campaign launched in November, we enlisted our Rum Shakers as influencers to drive consumer submissions and invited all of them to submit their moves for a chance to be featured in the crowdsourced music video for Conga feat. Meek Mill, Leslie Grace, Produced by Boi-1da. I’m thrilled to share that three of them – Danyliz Rijos, Dylan Snyder and Isa Murphy – ended up making it into the official video, as did one of our 2020 Legacy competitors, Cliff Mejia! Excited to see them on the big screen showing off their rum shaking skills both literally and figuratively!”

Featuring lead vocals from three-time Latin GRAMMY Awards nominee, 2020 Latin GRAMMY Awards performer and upcoming In the Heights star Leslie Grace, rap verses by GRAMMY-nominated musician and criminal justice reform advocate Meek Mill, and produced by Multi Diamond selling, GRAMMY Award-winning, “Producer of the Year” nominee Boi-1da, the “Conga” remake is a fresh twist on the hit 1985 single from Miami Sound Machine’s Emilio and Gloria Estefan. Blessed by Emilio Estefan, this new version of “Conga” is remixed for a modern audience that celebrates the beauty of self-expression and is sure to make you move your feet.

“BACARDÍ is thrilled to reveal the first-ever remake of the global smash hit ‘Conga’ and official music video. Over the past month, we closely reviewed all the incredible fan submissions from around the world and incorporated a select number into the final music video alongside the artists,” said Ned Duggan, Global Senior Vice President for BACARDÍ rum. “We’ve always seen music as such a powerful force in bringing people together, and as the world trended toward division and isolation this past year, we wanted to use music as a catalyst to bring people back together in a way that has never been done before.”

The lively full-length music video intersperses “Conga” enthusiasts’ dance moves alongside Leslie Grace, Meek Mill, and Boi-1da as they move through a vibrant Caribbean world. As the music video progresses, user-submitted dance moves begin to sync up with the artists’ choreography, culminating with the three lead artists visually pulling individuals from their own UGC worlds and inserting them into the Caribbean world, where they can all feel the rhythm of the music together.

Additionally, the official music video also boasts an impressive roster of celebrities and influencers – including 2020 Sports Illustrated Swimsuit Issue cover girl Jasmine Sanders, viral street-dance performer Lil Buck and singer, dancer and TV judge Alesha Dixon – who recruited “Conga” enthusiasts near and far to submit their dance moves and vocals when the campaign first kicked off in November. The music video also features an exciting cameo by Emilio Estefan, one of the producers behind the original “Conga” track.

Of course, we need a cocktail to enjoy while doing that “Conga” so BACARDÍ has created an official “Conga Feat. You” campaign cocktail called the Coco Conga. A delicious cocktail to quench rum drinkers’ thirst as they dance the night away, this spin on the Caribbean classic Mojito is made with a base of BACARDÍ Superior white rum and a splash of BACARDÍ Coconut Flavored Rum. 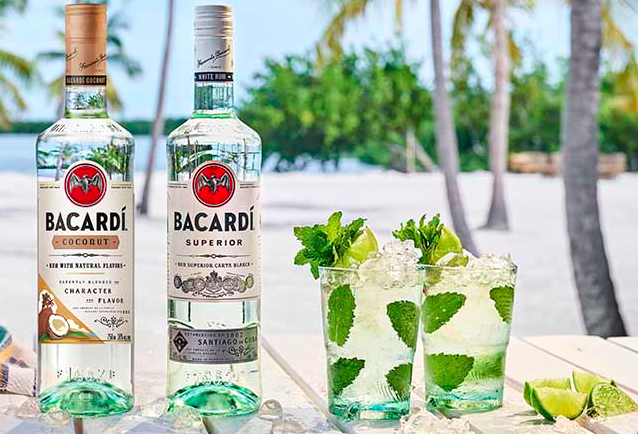 Method: Add the BACARDÍ Superior Rum, lime juice sugar and mint to a highball glass. Press mint with a bar spook to release oil. Add crushed ice, almost to top, and churn. Top with Club Soda and crown with a splash of BACARDÍ Coconut Flavored Rum. Garnish with a mint sprig and lime wedge.

Bacardi Conga Rum Shakers thirsty partner
BACARDÍ Rum Shakers Featured In “Conga” Remake With Meek Mill, Leslie Grace & Boi-1da2021-02-032021-02-03https://thirstymag.com/wp-content/uploads/2016/04/thirsty-nyc-logo-1.pngthirsty.https://thirstymag.com/wp-content/uploads/2021/02/conga-featured.jpg200px200px
About
Tara Fougner
Co-Founder of thirsty, Tara Fougner has over over 15 years of industry experience and a passion for the global beverage community. One might think that Tara was destined for beverage media as her great-grandfather, G. Selmer Fougner, is credited by David Wondrich as being "America's First Drinks Writer." A lifelong New Yorker, you can usually find her hunkered down on some barstool around the world chatting up the bar crew about their beverage program and endlessly taking pictures of drinks for the 'gram. In 2020, Tara was honored by Drinks International on their 'Top 100 Most Influential In the World' List.